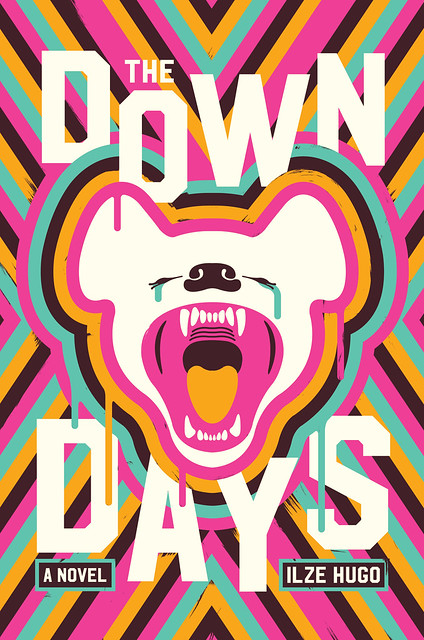 I’m going to use this intro part of this Big Idea piece to say that the cover of The Down Days, by Ilze Hugo, is probably my favorite book cover of the year. To date! There might be a better one down the line! But I suspect not. And now here’s the author to tell you about the book that merits such a fantastic bit of cover art. Spoiler: It’s super timely at the moment.

I stumbled onto the idea for my debut novel, The Down Days, while doing research for the Time Out Cape Town travel guide. I was visiting sightseeing attractions for research and on my list was a medical museum I’d never heard of that was hidden away behind one of the city’s hospitals.

Stepping inside, I found the usual array of weird historical medical memorabilia along with an exhibition on the history of disease in Cape Town that blew my mind. (Don’t get too excited and start dreaming about buying that plane ticket – the exhibition wasn’t much more than a few boards of text laid out in a row; no artefacts or fancy lights or audio or anything). But the ideas contained within the words on those boards made me think about epidemics in a way I’d never done before. Particularly the way epidemics have shaped my city.

Take scurvy, for example: If it wasn’t for scurvy, the Dutch East India Company wouldn’t have found the need to plant a veggie garden on the tip of Africa in the first place. During the 1600s, spices were a hot commodity. People went all ‘Dune’ for them. And getting them back to Europe was a death sentence for many. In fact, so many sailors were dying from scurvy while sailing between East and West that the Dutch East India Company had to come up with a plan. Their solution? Set up a pit-stop at the midway point and plant a veggie garden there. And so Cape Town was born.

The idea that viruses could shape a city culturally, socially and geographically. fascinated me, so I started doing more research on the cultural history of disease in Cape Town and abroad. What really struck me was the plethora of similarities in how humans responded to epidemics across different time periods and time zones. Every single epidemic seemed to be the same story on repeat. The history of epidemics was Bill Murray in Groundhog Day, stuck in the same loop, ad infinitum.

Take the way in which governments and society as a whole have consistently used epidemics as an excuse to further racial/political agendas and give a voice to really screwed up prejudices. (One South African example is how, during the Bubonic Plague outbreak in Cape Town, Africans needed a plague pass to travel because they were deemed ‘unclean’; their homes were also razed to the ground and they were sent to tented camps on the Cape Flats, while the houses of Europeans were merely disinfected.)

Another thing I found interesting was how myths, misinformation and conspiracy theories spread like wildfire during each epidemic. And crazy made-up cures circulated, like drinking whiskey or bleach. (This spread of myths and fake news would later become a major theme of my book.)

So now I had something that really interested me. Epidemics and how they change history. With a lot of great historical material to use for world-building. I was all set and ready to write my novel, right? Umm, no. Not exactly.

There was a problem. Epidemics were well-worn territory. It seemed like every damn novelist and their mother had written one. Not to mention all the films on the topic. So, how to do it differently?

While I was planning and writing the book, South Africa was reeling from a wave of corruption scandals; we had a major electricity crisis; and a water crisis that seemed positively Apocalyptic. (In April 2018, the city announced that we were 3 months away from running out of municipal water. To curb the crisis and try and stop Day Zero, citizens were only allowed to use 50 litres a day. That’s about 13 gallons – less than a 6th of what the average American uses per day*.)

But although it felt like the world as we knew it was falling apart, people were still going about their daily lives. Adapting to all the load shedding schedules and water restrictions and the bizarre newspaper headlines that sounded like punchlines to one big cosmic joke. Moaning a bit, sure, sometimes even having sleepless nights, but mostly cracking jokes. Cause what else could we do? We just had to keep going. Falling in love, feeding the dog, paying the bills, putting on pants in the morning. (Although nowadays, thanks to self-isolation and Zoom, that too is optional.)

I couldn’t help thinking about all those classic post-apocalyptic films and novels where they make it seem like one day the world just crashes to a stop in a big ball of proverbial flames, the clock resets and the next moment we’re running around in mohawks and leather bikinis with guns strapped to our ankles, dodging cannibals and living off fried rats.  And about all the horrifying epidemics mankind have managed to weather and somehow survived throughout history.

Maybe that whole fried rat scenario wasn’t so realistic after all? Maybe the Apocalypse would be more of a slow fizzle, rather than a big bang. Maybe it wouldn’t even be so Apocalyptic after all. Because in among the doom and gloom, people are stronger and more resilient than we give them credit for. Whatever the universe seems to throw at us, we just roll with it and adapt. Humans seem to have a way of surviving against the odds. Like cockroaches.

Yes, that’s what I wanted to write about. Not another just depressing, slit your wrists, let’s all cry in a bucket and put on the spandex kind of Apocalypse. I wanted to write an apocalypse with hope. Full of craziness, sure. And chaos. And cults. And confusion. And corpse collecting. And quarantine. And mass hysteria. And ghosts. And hair thieves. And MMA Easter Bunnies. And masks. Of course, masks. (Crazy ones, fashionable ones and colourful ones.) But also… hope.

*According to this National Geographic article: https://www.nationalgeographic.com/news/2018/02/cape-town-running-out-of-water-drought-taps-shutoff-other-cities/