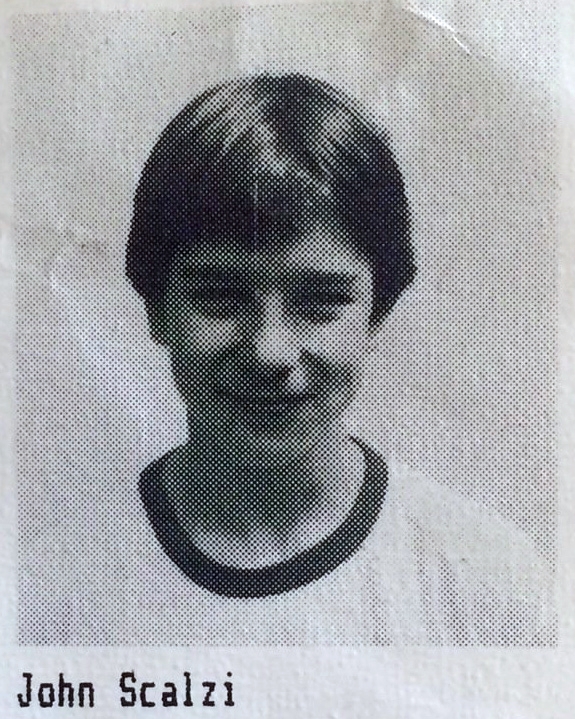 Who are we, really? Or as dchotin asks:

My grandmother used to say that as she grew older, she didn’t change, she just became more the way she was. I’ve always thought there’s a lot of truth to that – people don’t really change as they grow old, but aspects of their personalities become highlighted. Do you think that’s true? What do you see being highlighted in yourself?

I think your grandmother can be correct. But a lot depends on the person, and their choices.

Take, as an example, me. I very strongly feel a thread of continuity from the person I was at fifteen, and the person I am at 51 — the things I see in my personality as virtues are there at fifteen, waiting to be developed, and the things I see as flaws are also there, ready to be unleashed. At fifteen I was already observant and lazy and funny and attention-seeking and sensitive and manipulative, and so on. All of it there, all basically ready for me to start making choices about which of these things I would put into play, and paying attention to which of these things would get me what I wanted.

Which is great — except that I’m also aware that, had I made different choices, or if my life circumstances had been a little different, my life now could be wildly different in a number of ways — and yet the people who knew me at fifteen could still look at me and say, yup, we could see who you are now in who you were then. All the ingredients of who I am would still have been there. I simply would have mixed them differently, and gotten different results.

So your grandma is right. But she’d largely be right no matter what would have happened in the course of a person’s life — different circumstances require different aspects of one’s personality to come to the fore. Barring trauma that materially changes aspects of one’s personality, we play the personality cards we were dealt by our genetics, in the game that is provided by our environment. This last sentence is, shall we say, a grossly oversimplified metaphor for life. But I think you get what I’m aiming for.

I do often think about how my life would be different — and how I would be different — if certain things had turned out differently. Who would I be now if I had a stable childhood? If I had not gone to the high school or college that I did? If I had not gotten the first job I did? If Krissy and I had never met? If I had written a thriller instead of a science fiction book when I first sat down to write a novel? In every case, who I’d become then would not be the person I am now — but the person I would be is someone I think could still see a continuity to that fifteen-year-old me, and probably see the person he was now as, if not inevitable, at least highly probable.

Which is to say that out in the multiverse, there are many different iterations of me, each of them a lot like me, all logically derived from the same 15-year-old me, but different enough that I strongly suspect you would be able to tell us apart after a few minutes of conversation. It would be fascinating to get to meet some of them and chat with them and see how their version of life had gone up to this point. If some of them were novelists, we could totally swap books, and then suddenly all of us would have a decade or so of new novels to release without having to work at it! I like this plan. Because, remember, I’m lazy.

I will also note that at age 51, I’m not done with this — I am still making choices and I’m still deciding which parts of my personality to put to the front, and that will have an effect on who I am at 52, and at 60, and at 75 and so on (provided I live to these ages). I am reasonably cognizant of my virtues and also of my vices at this point in my life, so that’s nice. But that doesn’t mean I’m always going to make good choices, because I’m human, and you know how they are. I’m lazy and be petty and cranky and mean and tired and occasionally dimwitted just like anyone else. I’m not perfect, and I know that about myself.

And then when you do, you can look back and see that who you are is who you’ve always been. Just, as your grandmother said, more so.

(There’s still time to get in questions for this year’s Reader Request Week! Go here to ask your question.)