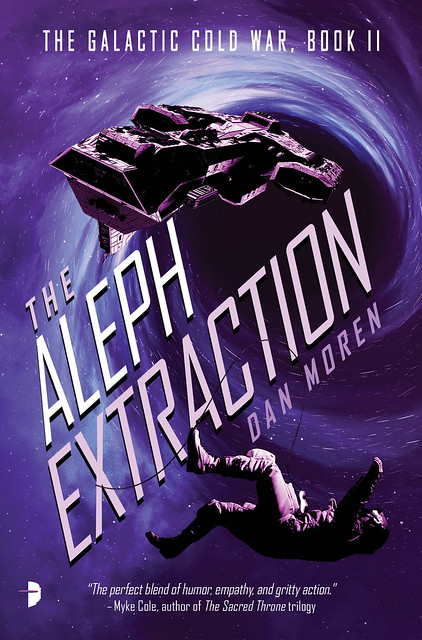 We are all searchers of truth — some more than others. Dan Moren is thinking about the truthseekers in this Big Idea piece for his new novel, The Aleph Extraction.

Truth is a binary concept: either something is true, or it isn’t.

As a certain Jedi Knight—and questionable teacher—once said, “many of the truths we cling to depend greatly on our own point of view.”

When writing any story, truth becomes a much more slippery concept for the characters, the reader, and even the writer. That’s especially true when you’re dealing with the shady realms of spies, criminals, and legends, as in my latest novel, The Aleph Extraction,

As Aleph opens, Commonwealth covert operative Simon Kovalic and his team are sent after the Aleph Tablet, a legendary artifact that’s believed to contain secrets which could tip the balance of the ongoing Galactic Cold War. Are those secrets real? Is the artifact they’re searching for actually the genuine article? Does the “real” artifact even exist, or is it all just a myth?

The idea for the Aleph Tablet stemmed from my fascination with the Mesha Stele, an ancient inscribed stone that’s one of the oldest pieces of archaeological evidence mentioning events from the Bible. I first came across the Mesha Stele in one of my Near Eastern Studies courses in college and, as someone raised by a pair of parents who were not particularly religious—one a mostly secular Jew, the other a lapsed Catholic—I was captivated by discovering the “truth” of religion. With the customary self-assuredness of a twenty-year-old, I figured that hard evidence must lead in a direct line towards capital-T, universal Truth.

A year or so after I learned about the Mesha Stele, I was traveling abroad in France and turned a corner in the Louvre only to come face-to-face with the stone itself. But as amazed and awed as I was to see it with my own eyes, what didn’t happen was an Indiana Jones moment, where I was confronted by the incontrovertible truth, beams of energy shooting forth as from the Ark of the Covenant—probably a good thing, since ouch.

Maybe it was because the stone was smaller in person, maybe it was because it was just tucked away in some random alcove in a museum, but for me, the truth of it in that moment was less earth-shattering than I’d hoped. Ultimately, the Mesha Stele is a window into historical events, but it neither confirmed nor denied truth.

That was a milestone in a lifelong journey, where I’ve learned that “truth” isn’t always synonymous with “fact.” Truth can be far more personal, such as one’s belief in a higher power. It’s something that one needs to search out for oneself, and it can take a long time—for some, their whole lives. Others might never find it.

All of the main characters in The Aleph Extraction are searching for truth in one way or another. Kovalic wants to know if the suspicions about his boss’s ulterior motives are true; daredevil pilot Eli Brody wants the truth of what happened between Kovalic and their former team member Aaron Page; and new recruit Addy Sayers, well, she wants to know if the future that Kovalic and his team promise can truly live up to her expectations.

As an author, you have to know the truth of your story, even if your characters don’t. Keeping track of what different characters know—and, more to the point, what they think they know—can be a tricky proposition. As the omniscient force behind the scenes, you can see the whole picture, but you want to be careful about how you dole out that information to the characters and to the reader—especially, if you’re building for a big reveal.

Every story depends at least in part on withholding the truth, whether it’s your classic whodunnit or a mainstream literary novel. Fundamentally, if your readers know everything that’s going to happen, then there’s not much reason for them to keep reading.

Character’s points of view are a lens through which you can present the reader with a facet of the truth. Those characters may have doubts and questions, or they may be convinced that they—and perhaps only they—know the real truth. They may even avoid confronting truths that are inconvenient or uncomfortable.

By the time The Aleph Extraction comes to a close, all the characters have had to grapple with truth and decide whether they can live with it.

I can relate: the older I get, the more I come to grips with everything I don’t know—and may never know. Having recently turned 40, the idea of ever getting to some sort of universal Truth seems further away than ever, especially given the world we live in, where the very idea of truth has become a weapon to be wielded in the service of opinion.

Ultimately, I’ve reconciled myself to the idea that some truths are unknowable, destined to forever remain a mystery. Is the Aleph Tablet one of those? You’ll just have to read the book to find out.