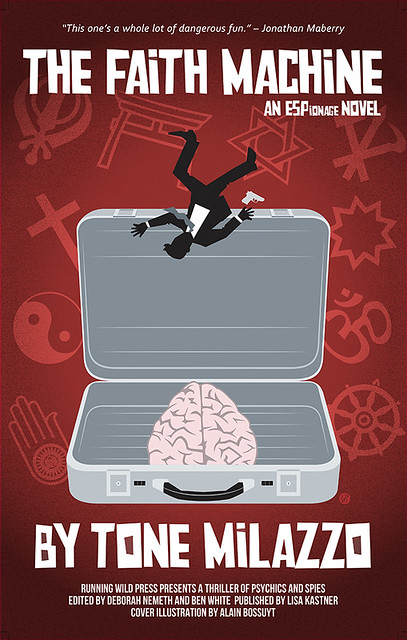 Get out your comic books: Author Tone Milazzo is thinking about the super humans that populate our popular culture, and how they relate to the themes of his new book, The Faith Machine.

It took me decades realize some pretty obvious things about superheroes.

For example: Batman will never stop the Joker from killing, not for good. When Bats takes the Joker back to Arkham Asylum at the end of a comic, it’s a carpool. Just a guy giving the Joker a ride home after work. For all his struggles, the best Batman can do is maintain the status quo. He has to if there’s going to be more Batman vs. Joker stories. Batman wins the battles, but he’ll never win the war, and the Joker gets away.

I think a lot (too much) about what if superpowers were real. How would the criminal justice system, economics, technology, intelligence, and the military accommodate even bottom-tier superheroes and villains? Superheroes are in their own printed world, but aren’t a part of their world. Heroes want to fix their world’s problems. But the publishers won’t let them. If you drop someone like Superman or Spider-man into a world like ours, they start changing things, and that world spins off into something unrecognizable (and, from a publisher’s point-of-view, unmarketable).

That hasn’t stopped superheroes from lurching toward realism since Marvel’s initial line up was set in New York instead of Fictional City, USA. A decade later, Denny O’Neil and Neil Adams challenged Green Lantern/Green Arrow with the real problems of drugs and racism. They brought Batman down to earth as well, abandoning the last traces of his TV persona and redefining him as The Dark Knight. A few years after that, Chris Claremont and John Byrne would bring complex, human relationships into The Uncanny X-Men at Marvel. Each of these legendary creative teams brought superheroes a step away from the simple, pulp origins of the 40s.

Come 1986, and two titles, Watchmen and The Dark Knight Returns dragged superheroes as far as they could into the real world, and dragged me, as a reader, along with them. I wanted stories that brought my childhood heroes into adulthood with me, a thick layer of nostalgia to protect me from the real world, but without the corniness. Any comic that professed, “This is what real life superheroes would be like,” had my money. Thus began the Dark Age of comics. The age of gritty anti-heroes whose imperfections outweighed their virtues. That’s what I thought I wanted. Until ten years ago, when two grassroots political movements emerged and were destroyed.

Occupy Wall Street was oppressed as law enforcement persecuted its members and leadership. Meanwhile, the Tea Party was exploited by Republicans for their votes and funds while giving nothing back. I saw new powers destroyed or manipulated by the existing powers. If this is how upstart political powers were treated in the real world, why not superpowers?

In this context, I finally realized this reality informed both Watchmen and The Dark Knight Returns. The Comedian and Dr Manhattan worked for the government, while the rest of the Watchmen were outlawed. Superman worked for the President, while law enforcement hunted The Dark Knight. I hadn’t seen this message about power under the Dark Age’s thick layer of grim and gritty.

The only way I could come to terms with superhero fiction was to write my own. Superheroes whose actions change and improve their world, but with a tension between superpowers and the established powers. My own lurch toward realism. For that, I needed a setting.

That came to me while reading The Men Who Stare at Goats, Jon Ronson’s non-fiction book on Cold War psychic warfare programs. According to first-hand accounts by the participants, members of the US Army’s First Earth Battalion were capable of clairvoyance, stealth, and the titular remote slaying of farm animals. They were superhuman and part of the intelligence community under the DIA (Defense Intelligence Agency). What if these “agents of the mind” existed, operating among us? Striking in secret with subtle powers, but still servants to greater, mundane powers?

Psychic espionage became the framework for exploring these themes of power in the The Faith Machine. A clandestine world where power doesn’t flex along a strict line between flashy good guys and bad guys. It’s hundreds of factions aligned to nations, criminal justice systems, economics, technology, intelligence, and the military, all at each other’s throats, usually for selfish reasons. When nascent powers manifest in this world the extant power structures move in to destroy or employ them to maintain the status quo. A story about one of those nascent powers learning to fight back, and to win once and for all.

One thought on “The Big Idea: Tone Milazzo”