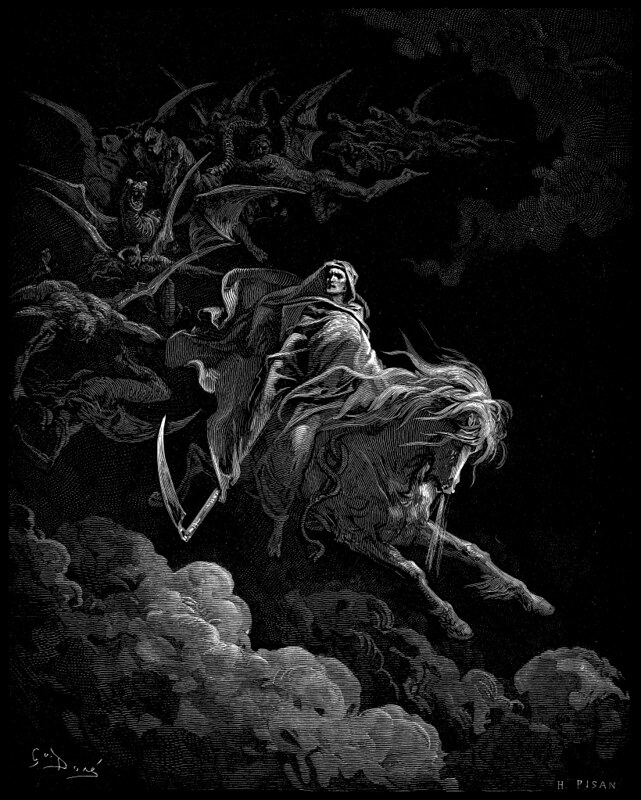 What does it mean to be dead?

For the person who is dead, not much! Because they are dead. They are no longer thinking about anything or doing anything or being anything, other than dead. Dead is a state of not; there is very little meaning in not. When I am dead, it won’t mean anything to me, and I know that from experience, since I’ve been not alive before (see: the roughly 13.7 billion years before May 10, 1969, the day I was born), and it didn’t mean anything to me then, either. I understand lots of people believe in an afterlife, and I think that’s fine, as long as you don’t use it as an excuse to be an asshole to people in life; however, I don’t believe there’s an afterlife (or a different life, or reincarnation, etc). I could be wrong! Won’t I be surprised! But I’m pretty sure I won’t be — in fact, I won’t be anything, because I’m dead.

“Death” in itself is a concept that, aside from the mere and banal scientific concept of what it means to be “alive” or “dead,” relies on the living to apprehend it; you have to be of a certain level of cognizant to even recognize that things are alive or dead; you have to be of an even higher level of cognizant to attach meaning to it. You don’t have to be human — we have very good evidence that animals other than humans recognize what death is and mourn those who die — but certainly humans are of the set of creatures who understand what death is and attach meaning to it.

While we’re alive, that is. “Death” is a concept for the living, who are in a state to apprehend it, understand it, and in doing both, attempt to attach some meaning to it, because we are pattern-seeking creatures, and we want things to mean something: To happen for a reason, so we can explain to it to ourselves, and to others.

So, for me, a pattern-seeking creature, what does it mean to be dead?

For one thing, when someone (or something, but for the purposes of this piece, I’m mostly going to stick with humans) is dead, it means that all your agency is done. You can no longer do anything, and you can no longer cause anything to happen. Yes, you can leave instructions for things to happen and you can even, while you are living, employ the levers of law/tradition/social conditioning to try to ensure those things happen after you’re gone. But once you’re gone, it’s up to others to decide whether to honor those instructions. Think of all the dead writers who left instructions for their writing to be destroyed by a spouse or friend, only to have that spouse or friend go “Yeeeeeeah, not only won’t I burn this manuscript, I’ll have it published instead!” Look up Franz Kafka and Max Brod, just for funsies.

This doesn’t mean that the repercussions of what one did in life end once one is dead; simply that one’s ability to meaningfully control them directly in one’s self is gone. Now one must rely on children, or acolytes, or lawyers, or whomever, to try to approximate one’s intent, to the extent that they will bother at all — if, frankly, one’s life and acts merit such consideration. Most of us do not leave charitable foundations, or social organizations or religions behind to be tended and cultivated. Most of us can barely remember to do estate planning. For most of us, what is required by the living once we are dead, in terms of our wishes — the very last suggestion of our agency — is to honor them, or let a probate judge sort them out if we didn’t leave behind a will. After that, whatever agency we had is done, and what is left is memory.

For a while, anyway, because one other thing it means to be dead is to be eventually forgotten. There’s a nice sentiment out there (well, nice to extent you like the person in question) that suggests no one is really dead if there is someone who still remembers them. For the vast majority of us that means family and friends. Their memory of us lasts only as long as they do, and in some cases, less time than that, after which point we are at best names on a family tree.

Most of us do not leave much in the way of tangible expressions of who we were — letters, articles, creative works — and if we do the things we leave behind are often banal, and of little interest beyond those who are in our immediate circle of confidants. Yes, your Facebook wall will remain after you die (well, maybe; social media companies have a way of disappearing and taking user accounts with them when they do), but very few people even now go back to read what’s there once people die. They are the unvisited testimonies of (usually) fairly ordinary lives.

Which does not mean that they — or the lives they represented — did not have value. Everyone has lost people they love, and cherish them in their memory. But just because you loved your uncle, doesn’t mean that your great-great-granddaughter will, or indeed should have any memory or thought of him other than a name and perhaps a picture or two. Your uncle will be forgotten. In time you will too. And so will your great-great-granddaughter. This is neither good nor bad; it just is. The living can keep only so many people in their heads; they are understandably going to prioritize the living.

Famous or notable people get to be remembered longer, but let’s be clear that the quality of that memory doesn’t tend to be all that great; in almost every case even the greatest and most powerful people of their time are collapsed down to one or two things that they did, not who they are. I can, for example, name you (probably) all the presidents of the United States, but with the exception of the very early, and the most recent, ones, I can’t tell you much of what they did or who they are as people. Literally the only thing I can tell you of Millard Fillmore off the top of my head, aside from his name, are his last words: “The nourishment is palatable.” Creators tend to be remembered for one or two works; in the memory of our culture, we all eventually become one hit wonders. And then we slip off the radar entirely.

(If you don’t think I think this will happen to me — ha! If I were to die tomorrow, I will be written up as “The author of Old Man’s War and Hugo winner for Redshirts;” 50 years from now I’ll be the author of Old Man’s War and other works; 100 years from now no one will read me except people doing degree work and maybe some family members. Prove me wrong, history! Prove me wrong.)

Which brings us to the final thing I’ll address in this particular piece: What it means to be dead is to be assessed. When one is dead, one is at the end of everything — there are no longer things you are going to do, or things you are doing, only the things you’ve done. Other people, pattern seekers that we are, will then look at the whole of that life to assess it and to sum it up. For some people that will be a short process — “beloved husband and father” — and for others it will take years (I suspect they will still be finding previously unknown material in Prince’s musical vaults 20 years from now, for example).

If you’re a regular person, it’s family and friends who do this assessing; if you’re a famous person and/or leave behind a notable body of work, it’ll be other people as well. With the latter, it goes into the cultural memory bank of you, and will often supplant who you were as a person — which is not a bad thing for you if who you were as a person was a real asshole or an otherwise terrible human. What is bad — and good — about a creative or historical person often is diminished because the work they leave behind is easier to apprehend and to deal with (and often, bluntly, more interesting, too).

Again, all of this is about the living, not the dead themselves, because, again, they are dead. They don’t care. They can’t care. The meaning of being dead is for the living, who will themselves be relieved of agency, assessed and remembered, and then forgotten, in turn, and so on and so on, until there is no one left who cares to assess or remember, and then to forget.

In the meantime, what it means to be dead is: Someone is still alive to give death meaning.