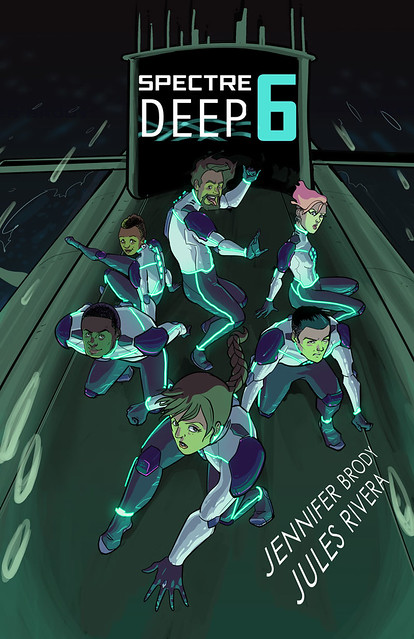 People have dreams — and then they have the dreams that come after that first set of dreams came true. For Jennifer Brody, who created Spectre Deep 6 with Jules Rivera, her new graphic novel is about the latter.

I always wanted to work in Hollywood. Growing up in a small town nestled in the Blue Ridge Mountains of Virginia, movies were my escape. Well, movies and books and TV. Anything that allowed me to travel to different places and worlds and see how other people lived, even if they were fictional characters. My imagination always ran big and wild, especially because I spent a lot of time bored in school. But Hollywood seemed so exotic and far away—so impossible. An acceptance to Harvard got me out of Virginia, and an internship landed me at Disney.

Upon graduating, I knew that I was moving to LA one-way without much money or even a job lined up. It was like that back then. You packed up your car and hit the road. You had to have blind faith. You chased after your dream. You lived on ramen. You had a roommate. You got paid $500 bucks a week. You ran errands and answered phones and started at the bottom. My first job was at Michael Bay’s new company Platinum Dunes. The first film we made was a remake of The Texas Chainsaw Massacre. We were the first to do the remake thing. Everyone thought we were crazy. My parents wondered if my tuition money had gone to waste.

The film was a hit, earning over $80 million at the domestic box office. Within a year of moving West, I landed my dream job working for the executive producer of The Lord of the Rings. Did I mention that I’m a giant nerd? I’d read Tolkien’s classics cover to cover numerous times. A run of book-to-film properties followed on our slate, including The Golden Compass, Love in the Time of Cholera, and Inkheart. Working in Hollywood was a dream come true, albeit a complicated one with its share of workplace toxicity (which has now become quite public).

Despite loving my job, I had an itch that started to grow stronger. It needed scratching. After working on so many wonderful authors’ books and helping bring their worlds to life on the big screen, I found myself wanting to write my own big sci-fi trilogy. It took years and tons of work, but eventually I found the courage to do so. The result was my debut novel The 13th Continuum, the first in what would become the Continuum Trilogy. You never forget certain the things. The first time you hold a galley of your first book in your hands—your words printed on real paper. The first time you read in public. For actual people. The first time you sign a book for a fan.

I love writing and building worlds more than anything. But something was still missing. One of the things I most enjoyed about my old job was working with a team to make a film, especially the director. In cinema, the director is the one who really brings the story to life in a visual medium. I’ve always been driven by collaboration. I love how different creative talents can come together to make something better than the sum of its individual parts. Even just working with a great book editor elevates your work. I was already starting to put my books and stories together for film and TV, but that is a process that takes years and years.

I wanted something that would combine both my love of books and my love of visuals—and that’s when it hit me. I needed to write graphic novels. The medium of comics had exploded since I was a kid fueled by the Marvel and DC Comics media empires, and expanded to include more experimental and diverse storytelling. I realized that I could work with an artist to bring my vision to life, and I didn’t need millions of dollars to shoot the film or TV show (that could come later, right?). This was the perfect middle ground between books and cinema.

I had stories aplenty—I needed an artist. But they don’t just fall out of the sky, or do they?

One fine Saturday, I moderated a panel at AnaCon and a plucky, fiery artist named Jules Rivera. caught my attention. She had green hair (we both had fun hair). She wrote a sci-fi indie comic called Valkyrie Squadron and a feisty web comic called Love Joolz. She had a background in engineering. I hit her up soon after over a sci-fi short story I’d written and published called 200, and then another crazy idea followed about soldiers that died in the line of duty, only to be reanimated by military scientists and brought back as ghosts—actual spectres—to continue to carry out missions for our government in exchange for day passes to haunt their old lives and fix their unfinished business. Spectre Deep 6  was born on an afternoon brainstorming in a hotel lobby in downtown LA (though it could more aptly be named The Secret Lives of Ghosts).

The comics industry can be tough to break into, especially for women. I cautioned her. I thought we’d be lucky to sell one of our proposals. But then my amazing publisher stepped up and offered us a six book deal. Yup, you read that right. Six books! Both series would be built into trilogies. Working in graphic novel proved to be a beautiful middle place between writing prose novels (and trust me, I’m still doing those—my new series Disney Chills publishes in July) and making films. As the artist, Jules takes my words and punches them up and translates them into visuals. It reminds me of working with a director, one who gets your vision.

Jules makes my work better. We work closely together on every aspect of the scripting, character and world designs, visuals, and more. These books—Spectre Deep 6 and 200—are better for our shared imaginations and a touch of insanity. That’s how it should be for any creative work, right? I also know that Jules will be my partner in crime for many more projects.