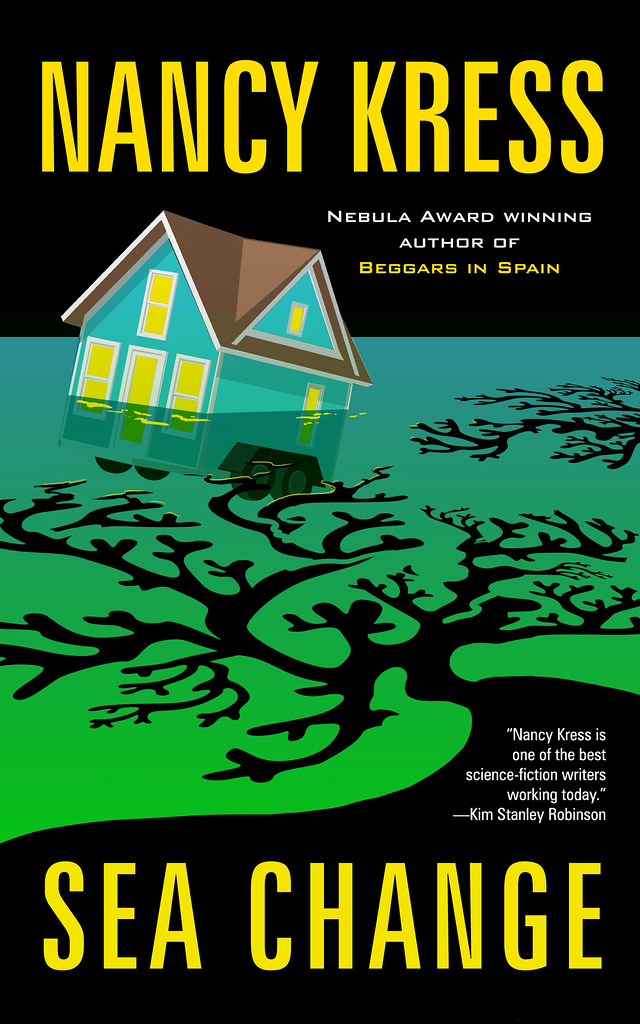 In today’s Big Idea, Hugo and Nebula Award winner Nancy Kress takes a look at controversy, science, and change — Sea Change, as a matter of fact.

At parties in my city—environmentally conscious, crunchy-granola, high-tech and socially activist Seattle—it is easy to start a flaming argument. Just walk up to a group, tilt your head, and say inquiringly, “What do you think of GMOs?” Then stand back to avoid being scorched.

Genetically modified organisms have passionate denouncers and equally passionate supporters. This is especially true for GMO crops, since the genemod bacteria and animals are usually hidden away in labs, ranches, or manufacturing facilities. But there is GMO food right out front on your table, plated in front of your kids. Everybody has an opinion.

But I didn’t want my new novella from Tachyon, Sea Change, to be a polemic for one side of the controversy. I wanted to explore in a balanced way both sides of the myriad questions involved.  In this corner of the boxing ring: GMOs aren’t natural! We don’t know what they do to the human body long-term! GMO crops will contaminate wild flora and/or kill animals, possibly including us!  There are studies! Look at the science!

And in the opposite corner: Neither is most of medical science “natural” to the human body, from Tylenol to heart transplants! There are decades of research already! Not one person has ever died from a GMO! If we don’t engineer crops, climate change and a growing world population will starve billions of people! Those studies have been invalidated! Look at the science!

The pugilistic metaphor is a deliberate choice. It isn’t only in Seattle that “GMO” is a fighting word, and with reason. There is a lot at stake: money, scientific reputations, food security, perhaps the future of the planet. The politics of genetic engineering, of agribusiness, of food regulation are all more complicated than they first appear. Both sides have waged wars of disinformation. Sometimes the war of words has spilled over into actual violence, with test farms attacked and crops destroyed, or Monsanto employees bodily threatened.

I am not a scientist. I think I would make a very bad scientist: not detail-oriented enough, or patient enough, or logical enough. Science fascinates me (forget rock stars and movie actors—I’ve always been a science groupie, sometimes embarrassingly so). But what I find really compelling are people. Why does a given person believe, act, love as they do? This is fortunate, because a writer cannot make a story solely out of controversial arguments. The science needs to happen to characters.

Sea Change happens to Renata Black. As I age, my protagonists get older (eventually I expect to be writing about octogenarians), partly because I get tired of brash, young, badass heroines. So Renata is a middle-aged woman in a near-future Seattle. Her life is not going as expected. She is a mother, a wife in a difficult marriage, an activist in a secret organization. An idealist, but one who recognizes that realizing ideals happens slowly, with effort, imperfectly, and sometimes at great personal cost.

Sea Change also happens to Jake, Renata’s actor husband. To their chess-loving son, Ian. To thirteen-year-old Lisa, a member of the Quinalt Nation. To Kyle, an ex-NFL wide receiver turned teen counselor, who has the unenviable task of trying to hold together a revolutionary cell of talented, utopian-minded misfits.

Finally, the novella is about other things as well as GMOs. Ocean blobs. Legal jurisdiction fights. Love and loss (if I hadn’t thought of it too late, I would have called my story Sea Change: A Love Story). The Quinalt Peninsula northwest of Seattle, which contains the world’s only temperate rainforest: wild, coastal, and beautiful.

A section of the Peninsula belongs to a Native American tribe, the Quinalt Nation, and so they, too, are part of my story.  For this, I had the help of a Native American sensitivity reader. The Quinalt, who have occupied their land for 1,000 years, depend heavily on salmon fishing, which is threatened by modern agricultural run-off, in addition to the host of other threats the outside world poses to Native American cultures.

Sea Change spans twenty-eight years. It begins in 2005, the year that Switzerland banned genetically modified foods and the United States added sugar beets to the GMO foods available to consumers, which already included summer squash, soybeans, papayas, and tomatoes. Renata is in college. When the novella ends, she and the world are both very different. But the battles over science go on.

And, as I read the news each day, it seems that they always will.