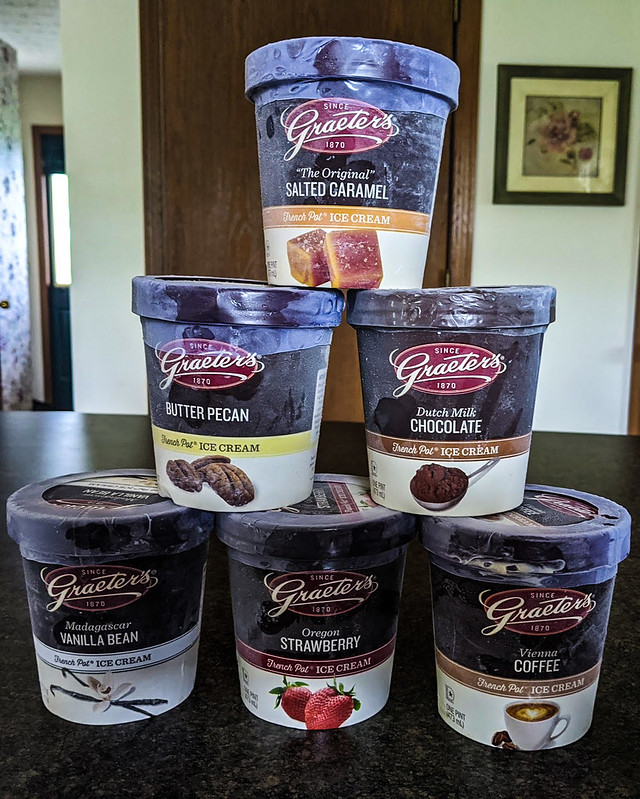 In the dream I and Krissy and (a slightly younger) Athena are on vacation, in Denver of all places, when it’s suddenly the end of the world — we’re talking mudslides and mushroom clouds. And as we watch this from the hall leading to our hotel room, I hand Athena the ice cream cone I’ve been eating (vanilla with red sprinkles) and say to her, “you finish this.” Because in my dream I know it’s the last ice cream she’s ever going to have, and I want her to have a memory of what ice cream is like.

So, uh, yeah. That’s my brain at the moment.

To be clear, I’m fine, the family is fine and the pets are fine, and there is no reason to believe we’ll be anything but fine for the foreseeable future. But like anyone in these times, I have my ups and downs. The last few days have been… down.

The good news is, I actually have lots of ice cream in the house — I was sent a bunch as a congratulatory gift for The Last Emperox. Maybe I’ll go have some. 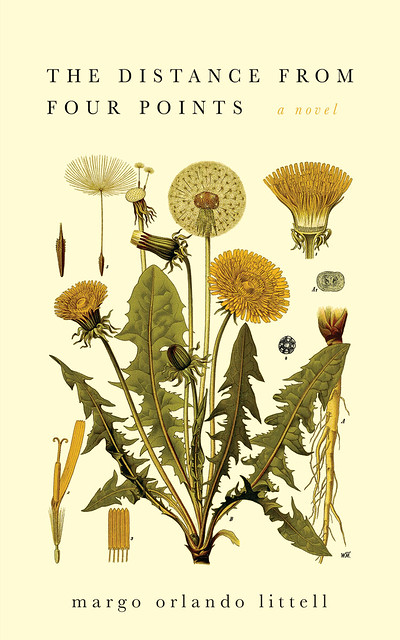 In her latest novel, The Distance From Four Points, author Margo Orlando Littell tests the proposition of whether one can indeed come back home — and whether her protagonist’s experience of doing so can and will differ from her own.

Like most novelists, I can say that the finished version of my novel is a completely different novel than it was in early drafts. Plot elements were sliced away; characters asserted themselves or stepped aside. The big questions that led me to write The Distance from Four Points, however, never wavered: what would happen if you were forced to move back home? What if you returned to the place you swore you’d never set foot in again?

I grew up in a small town in southwestern Pennsylvania, the kind of place where your high school homecoming queen, first-grade teacher, and second-cousin-once-removed are all people you run into regularly at the supermarket. Everybody knows your name and your business. Most people who grow up there don’t leave, settling in the same zip code, or even on the same street, where they were born. This was not my path. I left town for college in Dayton, went on to grad school in New York City, spent years in Barcelona and Sacramento and New Jersey, acquiring a house and family along the way. With my husband’s job in Manhattan and my kids in New Jersey elementary school, moving back to my hometown has never been part of any life plan.

And yet. I’ve always viewed my hometown as a safety net. It hasn’t been home for decades, but it’s home—Robert Frost’s home: “the place where, when you have to go there, / They have to take you in.” If something were to happen—some crisis, some loss—it would be a soft place to land. It wouldn’t be the life we’d expected, but we’d carry on and be okay.

In my writing, I wasn’t far from home. Fictionalized versions of my hometown are the settings for both of my novels. I could walk the quiet streets and make conversation at the gas station through the characters I created. It felt right to set down roots in my books as I wrote about familiar territory.

Then it got a little too familiar.

The Distance from Four Points takes up the big question of my life directly: what would it be like to actually go back home? Robin, my protagonist, is forced to return to her hometown—Four Points, Pennsylvania—when her husband dies, leaving her with only a few decrepit rental properties he blew their savings on. Robin must become a landlord to make ends meet. Researching the novel, I had a realtor take me into the worst homes available for sale in my hometown—the long-abandoned, much-abused properties available for a song.

These are not ordinary rundown homes. My hometown, an hour south of Pittsburgh, used to be a wealthy hub for coal and coke, and it was once home to more millionaires per capita than anywhere else in the country. These are houses where the town’s most powerful families lived, and, grotesquely, the opulent details remain: original woodwork amid ripped-up floors; in-tact stained glass amid missing windows; turrets; wraparound porches. Architectural ghosts of better days. One of these homes, a giant yellow-brick beauty too ruined to enter safely, was listed for $10,000 and wasn’t worth half that much, as it was actively crumbling into the ravine behind it.

A romantic-leaning person would feel strongly that these ruined homes had souls.

Not long after my visit, a friend bought one of these homes, and we partnered for a flip. It was a stately, five-bedroom, red-brick landmark with a turret. The project’s purpose was to rescue a town relic and help improve the neighborhood where both sets of our parents still lived. The flip failed. The renovation itself was spectacular—photos went viral on Facebook, with over a million views—but no one could afford to buy it. So we took in tenants, all of whom lied egregiously—we were easy marks, as absentee landlords—and failed to pay rent. Courtrooms and collection agencies entered my life. We lost a lot of money, a lot of sleep. The house we’d meant to save bowed to a new cycle of abuse.

All of this meant that the lifelong fondness I had for my hometown took a beating. Before, I would have described it as having Appalachian charm; I viewed it through the lens of a visitor, someone who’d show up to ride on the bike trail by the river or attend the annual Italian church fair. Now, having invested time and resources, all I could see were tenants who’d punch holes in walls and strew needles in the attic. It was a heartbreaking re-vision. Too gritty, too real.

Worse, for the first time, I felt like a true outsider. During visits, I’d always been welcomed, easily resuming a place that held the shape of my body even after so many years. Now, interacting with tenants by phone and email, I was only an absentee landlord. A stranger.

Meanwhile, in my novel, the path Robin walked was the reverse of mine. Her longstanding revulsion of Four Points evolves; while there, she finds unexpected community. What she believed was the worst of her hometown turns out to be what her affluent suburban life had lacked: unvarnished worldviews, blunt truth-telling, long memories. She sheds her bland existence and reaches for freedom. Though she returned to Four Points kicking and screaming, the acceptance she achieves is a triumph, not capitulation.

Researching this novel gave me an unwelcome look at the other side of this place I once knew, far away from family and childhood memories. Robin gets an answer to my novel’s big question—what would happen if you went back home?—and her contented future is, in those pages, assured. My own attempt to get closer to where I came from, however, to maybe even test the waters for a hypothetical return of my own, came up sadly short of a happy ending.