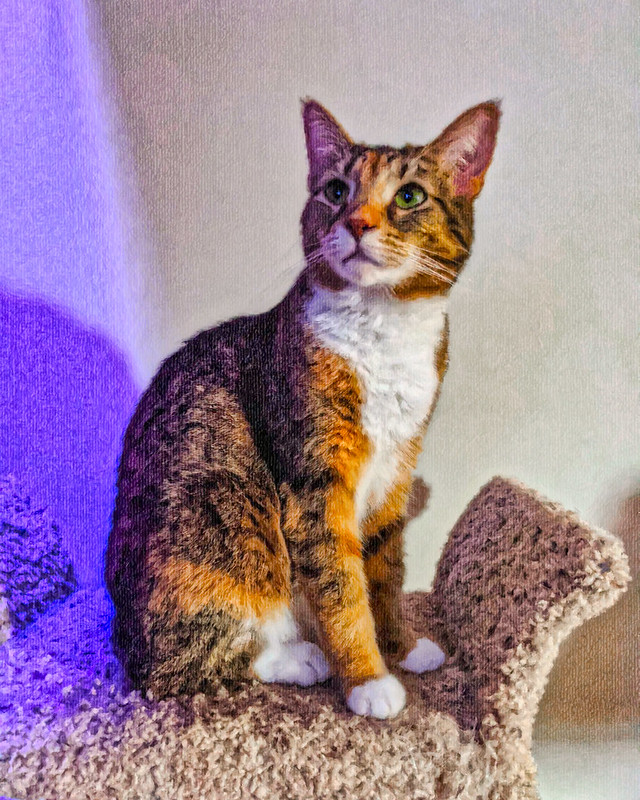 First, for no good reason whatsoever, here’s a picture of Spice, turned into a faux-pastel drawing through the magic of Photoshop filters. I think it looks pretty good, actually.

Second, June starts on Monday and I’m going to use the switchover in months as an excuse to get back into a work setting. Don’t get me wrong, I haven’t been entirely idle prior to this; January and February I actually did a fair amount of work (I finished the next Dispatcher installment and wrote a couple of TV scripts) and in April and May I promoted The Last Emperox pretty heavily and also did some backend business stuff, which I personally find pretty exciting but the fruits of which you’re not likely to see for a while (and which I can’t talk about in detail yet, sorry).

What I haven’t done since I’ve gotten back from the JoCo Cruise in mid-March, however, is any new creative work of note. I don’t feel too bad about this, because the world has undergone some literally cataclysmic changes in that timeframe, and I think most of us can be forgiven in being shaken up about it and also trying to find our feet again. But I also know when the deadline to turn in my next novel is, and this time I would like to write it in a manner that doesn’t require a mad rush of writing at the end. Which means starting writing now (well, Monday). That’s the plan, anyway. We’ll see how it works.

Over the last couple of projects, I have developed a process that I think works reasonably well for me. In the mornings, between 8am and noon, I use my Freedom app to block news and social media sites, so that I don’t have those to distract me from doing my creative writing during those hours. After that I tend to my other business (emails and non-creative writing) and, while I don’t have any blocking software on at that point, I pretty much try to avoid most news until about 5pm, i.e., when everything I need to do with my day is done and I won’t be distracted by being angry at whatever is happening in the world that day. It’s weird to think of scheduling one’s angry time, but, well. Welcome to 2020, y’all.

More to the point (for me, anyway), having a schedule is pretty much how I have to live my life these days. Younger me might be a little appalled at how much 51-year-old me needs schedules, but 51-year-old me has come to terms with how easily distracted he is, and how distracting the world is, especially now. It’s not a good combination for getting creative things done. Creativity, or my creativity, anyway, needs a little bit of space and time on a daily basis in order to get going and keep going. That means a schedule. Shut up, you’ll be older too, one day, and when you are you’ll probably find a schedule helps you too.

So, June: Back to work for me. I think you’ll appreciate the effort. Eventually.

17 thoughts on “Thinking About June”