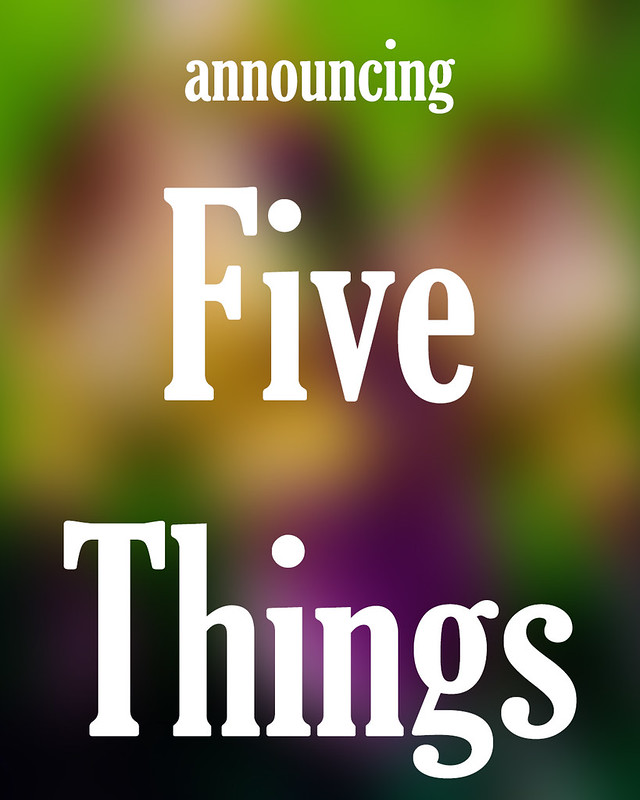 For the month of June I thought I would try something sort of new, sort of not: A brief daily write-up of five things I’m thinking about in one way or another for that day — could be news, could be personal things, could be a piece of entertainment, whatever (there’s that word). The point of it will be to a) be brief, and b) be daily. It’s not unlike the “various and sundry” pieces I’ve done from time to time, although a bit more formatted, for the simple reason that I think it’s probably easier to write to a format.

It doesn’t mean I won’t write longer pieces if I feel like it (honestly, I’ve never had a problem with that), but after a few months of feeling fairly disconnected to the world, I think it might be time to re-engage with a little more… after I’m done with my actual paid writing for the day, that is. Which is another reason to do a “Five Things” sort of column; if I’ve had a brain-draining creative session in the morning (which sometimes happens), then spieling out five things is less taxing than writing at length on a single subject. It’s all about me, folks!

When I say “daily” I’m gonna mean weekdays; I may do it on the weekend too, but if I do those will be bonus pieces. After the month of June, I’ll check to see how I feel about them. If I like the format, I may continue it. If I don’t (or find that contrary to expectation I’m spending too much time on it) then I won’t, or will amend it to better fit into my life. We’ll find out! It should be fun.

Also, generally speaking expect them later in the day than earlier.

Trump wants to label “antifa” as a terrorist group: Well, except for the issue that “antifa” isn’t an actual group, it’s a descriptor and shorthand for “anti-fascist.” And while it would be, shall we say, bold for Trump to publicly say that being anti-fascist is terroristic, I think it’s more to the point to say that Trump and his administration are trying to use “antifa” as a general umbrella for “any left-wing group of people we don’t like for any reason.” Which is also bold, and stupid, and bound to make more headaches for this dim-witted administration than anything else.

As I noted on Twitter, I am personally and politically adamantly anti-fascist, and I think that not only is that a non-controversial thing to say, it should bluntly be a foundational part of any American’s political philosophy. Someone noted that no one says that they’re fascist; they call themselves “patriots” or “real Americans” or whatever. Which is true enough, but as in all things, the thing one keeps one eye on is not what people say but what they do. It’s not that hard to see who is leaning into their fascist tendencies these days, both in government and out of it.

Ants have invaded my home: On a much smaller scale than the item above, we found ants marching across the floorboard in the downstairs hall, on their way to the pantry. Despite living here for 19 years, this is a new one for us; we might get the occasional wayward ant but this is the first serious incursion I can remember. I wiped down the floorboards with soapy water to dissolve the pheromone trail, so we’ll see how that does before the next step. Of course people on Twitter have been very vocal about what to do next, from Windex to diatomaceous earth to nuking the site from orbit, it’s the only way to be sure. I’m pretty confident we’ll not do the last one.

Making My Phone See Me: I have face recognition on my Pixel 4 and I use it, so it’s been annoying for the last several days when the phone has decided to only see me intermittently. I dropped my phone fairly hard recently so I suspect I might have dislodged the part of the phone that “sees” me in some way, but if I did that I would think that it would not see me all the time, not just some of the time. That’s the thing that makes it especially aggravating, honestly. Either work or don’t, please! (It’s not the front-facing camera — or not just the camera, since there’s an infrared sensor in play too, to reveal depth.) I do wonder if it might have something to do with my quarantine look at the moment; it’s safe to say I’ve let myself go a bit, facial hair-wise, in the last few weeks.

Christo dead: For those for whom the name is not familiar, he was an artist who did very large scale art installations, some more memorable than others. The one that sticks out in my memory is when he installed very large umbrellas in the “Grapevine,” the mountain pass that connects Los Angeles County to the Central Valley region of California. I was in California when he installed them, and I had reason to go through the Grapevine during the time the display was there, and you know what — it was beautiful, and made me happy all the way through the drive. Near the end of the display, one of the massive umbrellas got loose and caused a fatality, unfortunately; I remember seeing the picture of Christo during the press conference for that and he looked grief-stricken. As well he should have been; it changed the tenor of the installation entirely. But I at least will remember the joy it gave me when I drove through it.

And Now, Kareem Abdul-Jabbar on George Floyd: The link is to the LA Times, which is paywalled but which also should let you look at the article if you don’t visit all that often (I just checked; I could get at it fine on a browser I don’t have my LA Times account on). If all you know about Abdul-Jabbar is that he played for the Lakers way back, then I will update you by letting you know he is also a very fine writer of both fiction and non-fiction, and an incisive opinion writer. What he has to say on George Floyd and the current waves of protest is well worth reading and thinking about. So get to it.