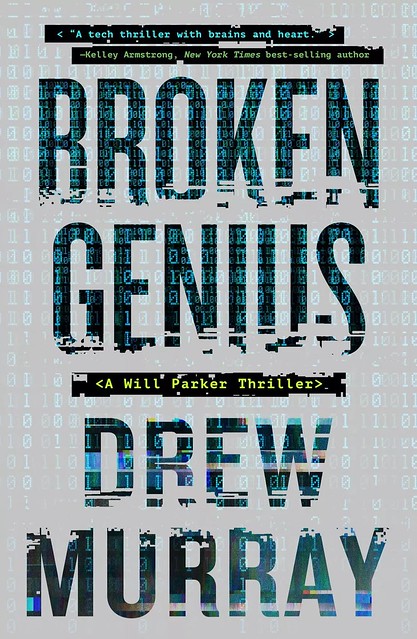 Author Drew Murray knew he wanted to write a technothriller with his novel Broken Genius — but how to do it in a way that reader would not get lost in the technological weeds? Murray explains his solution for you now.

Very close on the heels of every technology humans invent is a way to misuse it.

One crisp fall weekend a couple of years ago, I went to visit an old friend I’d last seen in Northern California while on a pilgrimage to see the birthplace of the computer age in Silicon Valley. Over pasta heaped with bacon, he filled me in on his new job in the world of programmatic advertising.

On some level, I knew we all, as consumers, were being watched online. But how much can be found out about us? The answer is a gut-crunching, tingle-down-the-back-of-your-spine feeling of being spied upon. I wondered, What could happen if the collector of said information were to use it for something less benign than advertising?

I had a protagonist in mind who would also be interested in the answer to that question. I’d come up with him for a short story I wrote at a writing conference with the theme, “Murder at the Beach.” I wanted my detective to be a creature of Silicon Valley, but that presented a problem. What would cause someone to leave the lavish tech industry with its catered Michelin-star-rated buffets and eye-watering wealth? Something terrible. I had several ideas. Will Parker ended up being so fascinating to me that I wanted to explore his character in the greater space afforded by a novel.

Writing about current technology requires research to get the details right, or people won’t feel it’s genuine. Writing about distant future technology in a science fiction setting has few boundaries, but must feel familiar enough to the reader to suspend disbelief. Writing about a near-future technology combines both of these challenges. Too much detail and a reader could lose interest. Not enough detail and a reader could fail to believe in the possibilities. Either way, the reader is taken out of the story.

One technology capable of elevating an eerie amount of information collection to frightening and dangerous is a quantum computer. Able to analyze almost limitless amounts of data instantaneously, it’s the hardware that will enable true artificial intelligence. But so far, this technology remains experimental. Explaining the details of how that technology might evolve in the future makes a great science journal article but is snooze-inducing in a novel.

The lifeblood of a thriller is stakes. People being killed to possess this technology is a great start and raises juicy questions. Who wants it? What would they do with it? And who else is in danger? If the answer to the last question is everyone, you’ve hit the gold mine of stakes.

The next challenge I had to keep the tension high was to find action. In some thrillers that comes naturally. In military thrillers, soldiers jet around the world getting into battles. In spy thrillers, secret agents operate under constant threat of capture. Action is everywhere! Tech thrillers have to work harder because the truth is, high-tech work is boring to watch. I spent over twenty years in technology, and most of the time it was people sitting at a computer screen, typing away. At first, it was in cubicles, later in large open spaces, and now at home because everything is connected. Not exactly gripping stuff. I needed a way to get out of the office.

To get the movement I was looking for, it had to be about hardware. A physical device, disconnected so it could move around. Even better, it could be lost, becoming the treasure in a treasure hunt. Something so valuable on the loose and up for grabs would trigger real physical action and a healthy dose of danger, since we’ve established that people are willing to kill for it.

But where would this object, this high-tech McGuffin be lost? For that, I considered what would be a natural and interesting environment for my protagonist, Will Parker. He’s a techie. He’s from California. He’s definitely a fan of science fiction in popular culture. My answer was a Comic Book Convention.

The problem with setting a book at a comic con is that like technology, the level of detail is everything. Not enough detail and it won’t feel authentic, especially to fans that have gone to one (or if they’re like me, lots of them). Too much detail and you get lost in the comic con itself, breaking the tension of the high-tech treasure hunt. What followed was a process of trial and error. It took several revisions to get that level of detail right, and the feedback of a carefully selected panel of early readers with varying levels of experience with comic cons.

The winning strategy was to choose elements of a comic con that are readily understood by someone who’s never been to a one, and then have the story interact with it in some way—such as celebrity autographs. Everyone knows what an autograph signing is, whether it features sports heroes, movie stars, or tech entrepreneurs. By choosing that element, I had only to show how it typically works at a comic con, and then have it play a role in the treasure hunt. Approaching it this way led to surprising and humorous outcomes.

The last piece that brought it all together was to choose a first-person point of view for Will Parker. Being inside Will’s head inherently makes him a guide through the worlds of tech and comic cons, while allowing him to bring his own particular style of commentary to the sights and events as they unfold. His narrative perspective allows me to fine-tune the level of details for readability because of what he focuses his attention on. We trust that he understands the details of technology, so that when he’s fearful over what could happen if this new technology is misused, we share that fear. And who doesn’t want to feel that creepy tingle when reading a thriller?