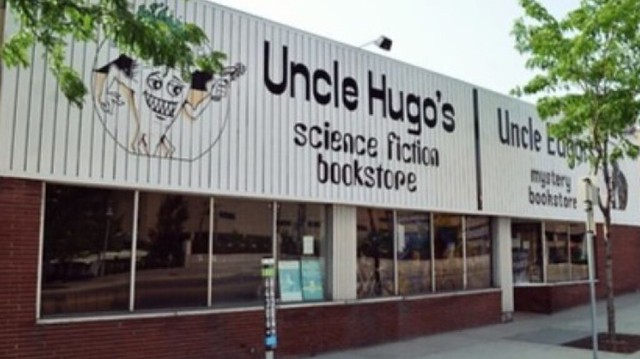 First things first: Uncle Hugo’s, the venerable Minneapolis science fiction bookstore, was burned down last week (along with Uncle Edgar’s, the next-door mystery bookstore). Almost immediately a GoFundMe was set up, but it wasn’t endorsed by Don Blyly, the owner of the bookstores. The GoFundMe has since been taken over by the Blyly family, who has made it the official GoFundMe for the stores, with an eye toward using the funds for rebuilding the bookshops.

I’ve done signings at Uncle Hugo’s and I know how important the store has been for fandom in Minneapolis and Minnesota, and am heartsick that some foolish (or malign) person set it alight. If the store was important to you, or if independent bookstores are important to you in general, for what they do for their communities and for readers, considering contributing to this GoFundMe. Again, it’s controlled by the Blyly family, so the money raised here will go to Don and to the stores. Check it out, and thank you.

Second things second: I got an email today about the Uncle Hugo’s GoFundMe, one of several I’ve gotten over the last few days. I was aware of the GoFundMe and have been for several days, but I was also aware that it was originally set up by a third party, whose association to the store and its owner were unknown to me. I wasn’t going to point to a GoFundMe I didn’t know was endorsed and supported by the store or its owner, and I knew Don Blyly was thinking of doing his own fundraising effort. I held off and then I got busy. When this most recent email showed up, I clicked over to see if the GoFundMe was the one that Blyly was planning to set up. It turned out it was the original GoFundMe, but the Blyly family has taken over its administration. All well and good; it was now something I could point to.

The sender of the note (who I am keeping unnamed, for reasons that are about to become clear), also wrote this:

Personal note to John: Larry Correia is already exhorting his fans to help, and I really don’t want to see him do more than you on this, please help!

And friends, I will tell you what, this really really pissed me off.

For those of you who are somehow lacking context, Larry Correia led the “Sad Puppy” campaign for a couple of years, and it’s well-known that I was not a fan of that little adventure, and that Larry and I had our go-arounds because of it. It was not a pleasant time for science fiction (I am, you will understand, eliding much for the sake of brevity), and neither Larry nor I are on each other’s respective Christmas card list. But it’s largely in the past now and both of us are off doing our own things.

With that understood, two things here.

One: Good for Larry Correia! Dude donated a thousand bucks to the GoFundMe and is apparently exhorting his fans and friends to contribute as well. What’s not to like about that? Well done him. I applaud his efforts.

So I am annoyed and actually sort of resent the fact this random dude thought Larry was the perfect foil to poke me with here. I am not so seized with animosity toward Larry that I will leap up from my chair to “beat” him in a fundraising score just because we hates him, precious, nor am I interested in reheating the whole Puppy bullshit one more fucking time, and certainly not in the service of a GoFundMe that is in point of fact absolutely and entirely unrelated to that particular lamentable moment in science fiction fandom history.

More bluntly: the thought process of “I want someone notable to contribute to a fundraising project I think should be important to them so I will motivate them by dragging the spectre of someone I think they hate into their field of view! It’s the perfect plan!” is really weird and fucked up, y’all. Don’t do it.

Even more bluntly: Look, asshole, if you want to rally a community together, don’t start by trying to fucking divide them. Helping Uncle Hugo’s isn’t about me, or Larry, or our respective fans (which almost certainly have significant overlap in membership) fighting over who can do more. It’s about saying this place was and is important to us all. Let’s all help.