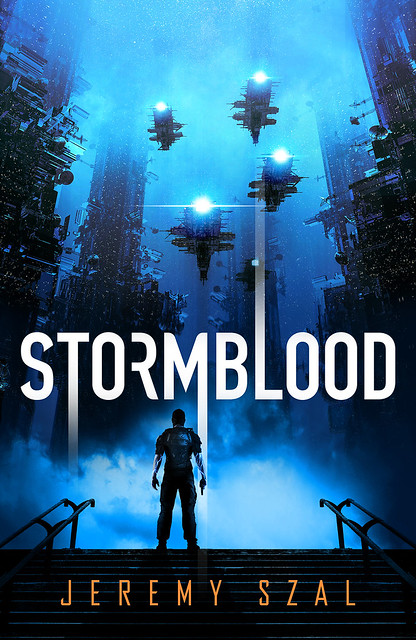 War changes people, and in Stormblood, some wars change people more. Author Jeremy Szal is here today to explain how, and why.

Blood is thicker than water. Does that still apply when your blood is infused with alien DNA?

The central idea for Stormblood is that a far-flung, interstellar society has began injecting humans with stormtech, the DNA of an extinct alien race. This biotechnology fuses with a person’s muscles, nervous system, bloodstream, ultimately making them permanently addicted to adrenaline and aggression. So when an interstellar war broke out, they shot their soldiers up with this untested, unknown alien DNA, turning them into Reapers: living bioweapons with super-strength and enhanced abilities, literally addicted to their own body chemistry and literally addicted to killing. When Reapers were dumped on the frontlines, the outcome was inevitable. The war was won. The galaxy’s saved.

Because these Reapers who’ve been jammed back into a society they no longer recognize still have an alien organism kicking around inside their bodies, demanding adrenaline, demanding danger and demanding prey. Because stormtech has leaked onto the drug market, with millions of citizens addicted. Because there’s now a drug epidemic spreading across the galaxy.

Of course, that’s only half the idea.

I’m interested in the personal, intimate side of my characters. Their relationships. How the stormtech changes that. Which is why I wrote Vakov Fukasawa, my protagonist, in first-person. He’s a broken, wreck of a man who’s desperately trying to do the right thing, even when it hurts. The only way he and his Artyom survived growing up on a backwater planet with an abusive father was by leaning on each other, by showing love and support in their darkest hours. And when Vakov left his brother behind to become a Reaper, that same sense of kinship was transferred to his squadmates. How they were the only people who understood what it’s like to have an alien organism sniffing up your backbone and into your skull. How you got excited when enemy gunfire started chewing your cover away.

Stormblood isn’t set in wartime, but through character, I used it to build upon the central themes of loyalty and brotherhood. How friendship helped these men and women stand together against this terrible darkness. How the desire to do right by the people you love is the most human thing you can do, even when you’ve got a non-human organism twitching in your flesh, your blood, your sweat. These soldiers aren’t just fighting a war; they’re fighting for their humanity. And the battle only became winnable when they stood side by side. I’ve always loved the tropes of a found family, forged by trauma, bonding as they march through hell and back together, so I transferred that passion to my protagonist.

But it doesn’t end there, of course. Because when the war’s over, Vakov is enraged to discover that his former squadmates slowly being killed off, deliberately overdosed by their own body chemistry, and knows he has to find out whoever’s doing it.

Only, the prime suspect is his first brother: Artyom.

I said earlier that I’m interested in the personal and intimate side of stories. I want to get close to the bone, into that little vulnerable area in the heart where things really hurt. And for it to be real, I need to put a bit more than is comfortable on the page. Friendship and brotherhood and loyalty are everything to Vakov, because they’re everything to me. In the war, Vakov promised he’d do right by his Reaper brothers, as they would for him. But he promised he’d protect Artyom, too.

I’d be lying if I said I didn’t pour myself into Vakov, his heart slowly tearing as he struggles to navigate his loyalties as a brother, a Reaper, and the friends that help him investigate the murder. I allowed Vakov’s emotional arc to drive the narrative, and the more time I spent in his body and head, the more surprised I was by the themes that developed on the page, and how much they meant to me. Not least of all seeing how he emotionally adapts to his body as the danger ramps up, becoming more and more aggressive, to the point where he’s afraid of hurting the people he cares about most. Whether he’s ever in control, if the alien organism’s been manipulating him this whole time.

And keeping that balance wasn’t easy. Not only is Vakov a soldier, he’s bursting with an alien organism that plays havoc with everything from his sweat and saliva to his taste buds and mood swings. That, and he’s got the patience of a cocaine-addled fruit-fly with ADHD. Not sure it’s much of a surprise when I say he doesn’t like playing by the rules. Or listening to authority. Or taking the procedural route. So, when interrogating an alien drug dealer, Vakov’s more inclined to skewer the creature’s face with his fist than have a talk. But afterwards when his friends rub him the wrong way, he’s got to literally force myself not to hurt them. Mapping out Vakov’s internal struggle as he forces himself not to tear apart anyone and anything that rubs him the wrong way was difficult, but it was fun. It also let me get away with some very morbid humour.

Stormblood is a space opera wrapped up in a murder mystery, but it would be nothing without the emotional core of the narrative. What we owe to each other. How the war to maintain your humanity and empathy is a never-ending one. How when we feel broken and worthless, brotherhood and love can pick us up, can make us want to always do better. Putting my characters through hell and making these important to them showed me what’s important to me. I guess I’m saying that parts of this book are autographical. Because, at the end of the day, that’s why we consume stories, right? To see ourselves on the page, broken and messy and utterly human, having wild adventures while trying to figure ourselves out, trying to do the best we can?

Maybe that’s why we write them, too.