Here’s today’s five for you:

It’s a police riot: Or so Jamelle Bouie says in the New York Times, and there’s certainly been enough evidence in the last week to show that the police working the protests aren’t exactly treating the folks protesting the death of George Floyd with the same tender care and respect as they treat, say, a bunch of white dudes with semi-automatics screaming about their desire for a haircut. Greg Doucette has been collecting up video of the police in various places not exactly keeping order; currently he’s above 300, which makes it difficult for even the most persistent “#NotAllPolice” to keep finding excuses for them all. Or as Kumail Nanjiani notes:

1. Police decided to violently quell protests to loudly proclaim they won’t change.
2. The strategy backfired because we now have 100’s of videos of cops using excessive force. Ppl who didn’t think police brutality was an issue last week now believe police reform to be essential.

I’ve written before about how and why it is I don’t fear the police, and indeed usually feel they are serving me well. But I also know that lack of fear, and positive experience with them, is strongly rooted in my whiteness, and that my lived experience isn’t the lived experience of so many of the people I know and care about. As Kumail notes, what’s happening now is lot of other people who like me have gotten the benefit of being on the white side of policing, are getting their faces rubbed into fact that policing is systematically racist and also concerned with its own perpetuation. All these videos, at least, make it much harder for police to argue against the first of those.

(Plus now the police have pissed off journalists by going after them, too. Yeah, that’s going to be remembered by the press for a long time, folks.)

Is Trump losing the evangelicals? Lol, I’ll tell you what, I’ll believe that when we get the exit polling in November and it shows either some significantly larger percentage of evangelicals voting Democratic (which I find deeply unlikely), or just staying home because they can’t bear to vote for Trump a second time (somewhat more likely, but still deeply unlikely). I suspect evangelical disapproval of Trump is like Susan Collins’ disapproval, i.e., a scrunching of the face to express concern, and then voting exactly the way Trump wants her to. Evangelicals have hitched their wagon to Trump; I suspect he’s going to run them right off a cliff. They will deserve it if he does.

Cate Blanchett vs. a Chainsaw: The result may surprise you! (Spoiler: It won’t. She’s fine. If she had done herself a serious harm, you wouldn’t be hearing it from me first, now, would you.) Personally Ms. Blanchett’s misadventure just reconfirms my general choice to avoid all serious machinery. I know my dexterity stats, and I want to keep all my limbs if at all possible (and also my head).

Space Force and trademarks: Okay, this is interesting to me — Netflix has beaten the United States government to trademarking the term “space force” around the world and the ramifications of that are discussed in the linked article. Like the writer of the article, I don’t suspect people are going to confuse the show with the military branch, but if I walk around with a Space Force t-shirt, someone might reasonably wonder if I’m promoting the show or showing enthusiasm for the military. I personally would have thought the government would have dealt with that, but then again, I was also surprised that Paramount hadn’t trademarked the term “Redshirt,” thus giving me free rein to use it for my book. So, I don’t know. Maybe I expect too much out of large organizations as regards their potential intellectual property.

The UK version of The Last Emperox has arrived at The Scalzi Compound. Here it is with its US sibling: 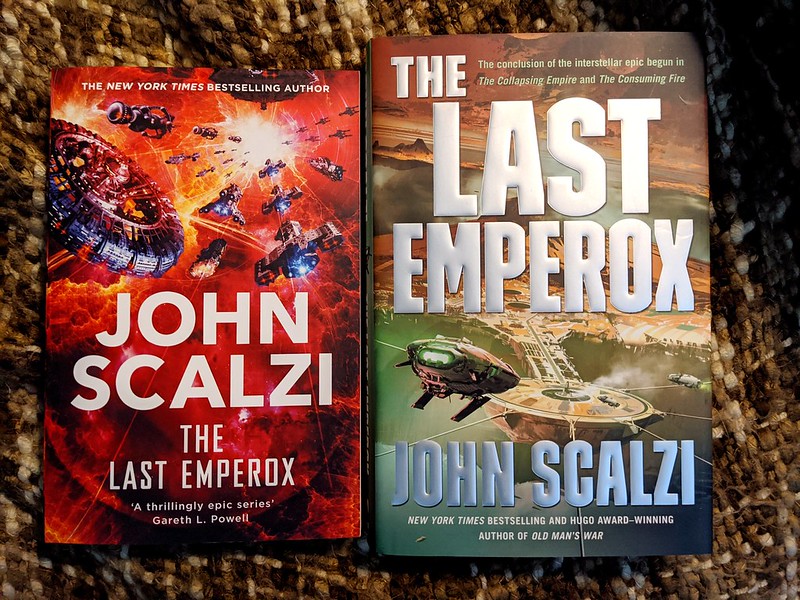 My UK edition is a trade paperback, because apparently that’s how I sell over there, which is, you know, fine. Whatever works, is my motto. Soon I’ll start getting copies of the various foreign language editions (well, soonish — it takes a while for translations and scheduling and so on). In case you’re wondering, no, it never gets old, seeing books with your name on them. Because you’re the author, I mean. Anyone can scribble their name on a book, you just need a Sharpie for that. But being there because you’re the author — hits a little different, as the kids say.