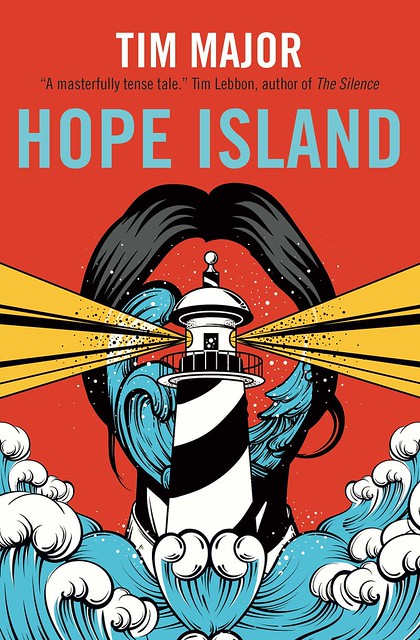 When you have kids, it can really mess with your focus and ability to do things. But can it also be an inspiration? Ask Tim Major, who in this Big Idea for his novel Hope Island, has some thoughts on this very subject.

Probably, all new parents are entirely preoccupied with the act of parenting. Probably, it’s for the best. Becoming a parent rewires the brain, and the act of parenting distracts you constantly. Again, totally fair. You’ve taken charge of a lifeform singularly incapable of fending for itself. You’ve split your brain right down the middle. Half for you, half for something that has only just begun to exist.

I became a parent in 2013, the same year I began to take writing seriously. My first novella was written during my wife’s pregnancy and I began writing my first novel when my son was a few months old. Almost all of my writing has been grounded in this new status of parenthood, and my new novel, Hope Island, is the most explicitly connected to it yet.

It was a literary editor, Cyril Connolly, who commented: “There is no more sombre enemy of good art than the pram in the hall”. I don’t know his circumstances. Perhaps he had a really narrow hall, and kept his pens in one room and his paper in another, with the pram blocking access between them. And his statement isn’t true, anyway. I tell myself often that it’s not true. The pram in the hall is significant, obviously. Children are wild and cruel and they care little about their parents’ ambitions – but becoming a parent can provide motivation rather than sap it. It can force you to channel your available time.

When I became a parent it was soon clear that carving out time to write would be harder. So I dropped other activities, and carved out the time. I conjured new ideas on the commute to work and wrote them up in the half-hour before my colleagues arrived. I didn’t get around to writing. Instead, I just wrote. I allowed my writing to be shitty. I would tidy it up later. I told myself there would be a ‘later’, when my presence of mind would return, and eventually there was. When my second son was born, I resigned from my job and started a freelance editorial business, and so then all four of us were almost always in the house, often laughing together, often clawing at the walls. I still wrote but I don’t know how or when I did so. Everything of that period remains a blur. My wife and I divided our days right down the middle, tagging in and out of childcare and work, passing each other in the corridor, sidestepping the pram in the hall.

These are all practicalities, but something else happens to your mind when you become a parent. I can’t tell you what. I write stories to figure it out. Becoming a parent scrunches up your identity and when it’s finally unscrunched, it’s different. There are holes in it, and crayon doodles on it.

Whenever I sit at my attic desk to write, temporarily free of my responsibilities towards my children, they are still on my mind. I love being a father, but I worry about that not being the case. What if one day I found myself resenting my children? What if things had been different, and I had resented them from the beginning?

When I was planning Hope Island, the thought of writing about creepy children in a remote community seemed just one of those ideas, those tropes with which everyone is allowed to play. I relished its heritage, from John Wyndham’s The Midwich Cuckoos onwards. Now it seems ridiculous to imagine that I chose the subject arbitrarily. In my novel, a British mother and her teen daughter, who are already out on a limb on a tiny island off the coast of Maine, struggle due to the tensions between them as much as the terrifying circumstances they face. Hope Island is about my newest fear, now that my children have survived infancy – the fear of a failure to communicate with them as they grow older. In the novel, Nina only reluctantly became a mother to begin with, and she has no support from her absent partner, and the visit to the island represents her last-ditch attempt to reconnect with her daughter.

Hope Island has its fair share of speculative elements, and its fair share of scares. There are ethereal cave songs and uncanny archaeological finds and silent, murderous children. But as far as I’m concerned, the most horrific element is the straining and breaking of the relationship between a parent and child, a daughter drifting away to join an impenetrable group – and, worst of all, a mother who fears losing her child but, equally, fears keeping her, uncertain of her own parental love.