Okay, let’s see what’s up in the world and with me today:

He pushed himself! A study in contrasts between the two men vying to be the president for the next term: Trump is suggesting the 75-year-old man who was injured whilst being abused by the Buffalo Police sorta, you know, made himself fall harder; Biden, on the other hand, gets applause for directly and sympathetically addressing George Floyd’s six-year-old daughter at Floyd’s funeral in Houston. One may be as cynical as one likes about Biden and his motivations for making at appearance (via video) at Floyd’s funeral, but honestly it’s refreshing to see someone on the presidential level who has the horse sense to read the moment. Remember when we had presidents who could do that? Seems so long ago now.

Bon Appétit and Refinery 29 editors gone: For wearing brownface and being a real jerk to minority staffers, respectively. I’ve seen relatively little hand-wringing about what this means, and whether white editors should be judged on racist things they did at some point in the past when they were still actually adults who should have known better; now doesn’t appear to be the time for that, strangely enough. Likewise, treating minority staff poorly (or allowing them to be treated poorly). The most I’ve heard is anxiousness about what this means for the Bon Appétit test kitchen videos, which apparently a large chunk of America has been self-medicating with during the quarantine. Apparently people who weren’t being paid for appearing in the videos will be paid now? Good.

Poll problems in Georgia: Shocked, shocked I am that people in Georgia, of all places, might have experienced difficulties in voting. I’d like to believe that this issue will be resolved before November, but I would also like to believe in butterscotch unicorns as well. You can say I’m a little skeptical about the state of voting in the United States right now. It’s not my number one political issue at the moment, but it’s up there in the top ten.

Lollapalooza cancelled: Which is not surprising but still makes for a sad moment in this particular Gen-Xer’s day. Fun fact: I attended the first Lollapalooza tour (back when it was a tour and not a festival) — outside Chicago, which is where it eventually ended up when it became a festival. I went to a few more installments after that, but as they say, you always remember your first. I specifically remember Nine Inch Nails tearing the roof off the place; they were third from the top of the bill and they made it hard for Siouxsie and the Banshees and Jane’s Addiction to top them. The Lollapalooza’s organizers promise to do something online and virtual this year, and I’m sure that it’ll be fine. But I think everyone will be happier if and when in person musical festivals come back.

A less than welcome summer first: Say hello to the first horsefly of the season, thankfully on the outside of the window screen: 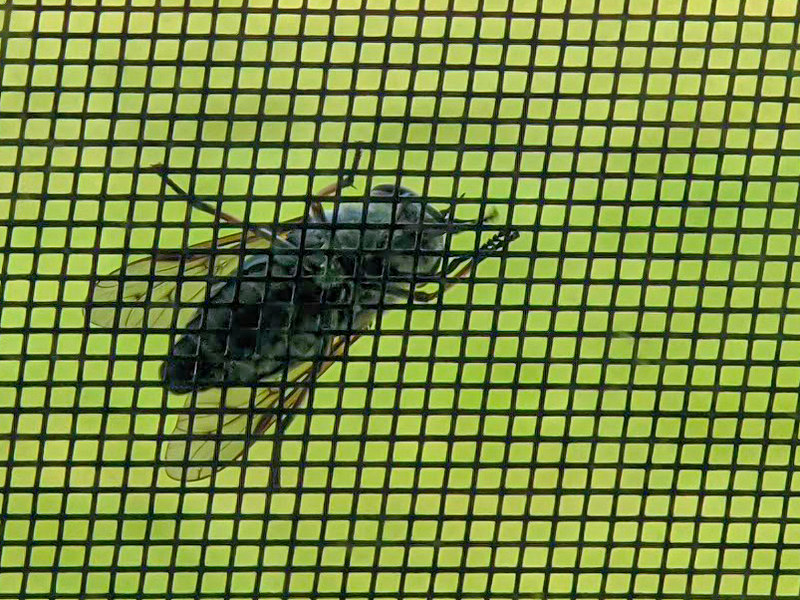 In real life, this dude is roughly the size of my thumb, which means it’s pretty big. They’re nasty customers and they like to pick fights with my car as I’m heading down the driveway. I’m not entirely sure why; my Mini Countryman may be small, but it’s still exponentially larger than they are. They’ll be around through early September at least. Oh boy.