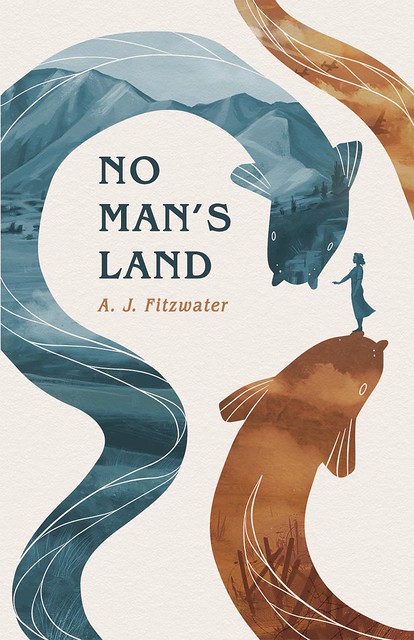 In today’s Big Idea for their novel No Man’s Land, author A.J. Fitzwater gives a good example why it’s a good idea to support local businesses: because you may find something there that opens a lost world to you.

Within a moment, across the years, decades, centuries.

They speak to each other in agreement or argument, uplift or downfall. Sometimes their crossing of paths is beautiful serendipity.

No Man’s Land speaks to something I didn’t think I had in me – history isn’t my jam. And it also speaks of some of the most important things to me – the invisibilized parts of New Zealand women’s and queer life.

The conversation began in a Christchurch second hand book store, Smith’s in the Tannery. Post-earthquakes, Smith’s had moved from a three storey joyous chaotic warren in the central city to a pared down nook specialising in everything New Zealand. Not usually my cup of tea, but I was trying to give my custom to as many local bookshops as possible.

A shelf of women’s history piqued my interest. One book in particular literally leapt into my hands. The Land Girls: In A Man’s World 1939-45 by Dianne Bardsley (University of Otago Press, 2000). The cover shows a muscular, tanned white woman, sleeves rolled as tidily as her hair, clip shearing a sheep, staring boldly into the camera.

How many times had I heard women weren’t strong enough for trade work or the farm? That was at odds with the amount of rural women I knew (a fair few, who would kick your arse for suggesting as much). I wanted to know how far this patronising myth extended.

Post-war, the New Zealand land girls were ignored by society, the farming community, and the government in an effort to force them back into domestic spheres. Accolades didn’t exist, they weren’t welcome in the VE and VJ day celebrations, it became difficult to be paid what they were owed and to find jobs, and government documents of service were destroyed. What remained became mostly oral history, and Bardsley endeavoured to document some of this history before the generation disappeared.

A title rung like a bell in my mind, luscious with layers: No Man’s Land. The land girls took on the farming jobs the troops left to go to war. They were fighting for their rights, conscious or not, in the liminal space between necessary “manpower” and discrimination. And a number of them were queer – defying gender norms, “spinster aunties” who lived alone or together, too busy with the farm to get married.

This was a story I wanted to tell, with magic for good measure.

What began as a short story, my preferred form, began to blossom out, to demand space, life, breath. I did more research into New Zealand women in war time (the Women’s Auxiliary Air Force, the Women’s Auxiliary Army Corps, and the Women’s Royal New Zealand Naval Service), and tapped into family memories of the area and era. The Bletchley Girls, Rocket Girls, and Hidden Figures stories became popular around the same time; while not explicitly linked to my work, they provided good tangential inspiration for characters and other stories.

What I discovered along the way is that history isn’t my jam because it was designed that way. It was written by the victors – the patriarchy – so I had only a narrow, domestic view of women’s contribution. And how I could even imagine queer heroes or lives when those stories were upheld as tragic figures, or weren’t told at all? Without a view of yesterday, we have to reinvent ourselves, bring our imaginations back to square one, over and over.

With each book on women’s war and STEM history I read, it spoke to another and another, speaking truth back into the space created by the warp of history around the event horizon of women’s contribution and lives.

As with many of my stories, I started with the themes first – isolation, marginalization, found family, discovery of self, fear, sacrifice – then the characters fleshed into those ideas. The townie who knows little about farming but is doing it to escape the spectre of marriage became Dorothy “Tea” Gray (Earl Grey Tea. Hot). Her brother Robbie became a twin in family and magic as a nod to one of my favourite childhood books, Under the Mountain by Maurice Gee. Izzy Larson is the friend who must use her magical abilities to hide multiple parts of her identity in a world she is always at war with, creating layers of thick skin and a sharp tongue. And Grant Stevenson is the token man of the team (as Robbie is on the front lines), scrawny, sickly, quiet, and with an understanding of the feminine that mystifies Tea.

(I will admit it here now, because NO ONE has guessed the Easter egg of Grant’s name; Grant and Robbie are AU pre-serum Steve Rogers and didn’t-get-Winter-Soldiered Bucky Barnes. And…KISS.)

Of course I was going to make this story queer. Very very queer. Queer all over the place. There were always queer people in the war and in rural areas. They ran risks to find each other, to be together, so as not to be so alone, and to show the way for others. Need and identity are forces just as magical and necessary as the shape shifting power than sits in my characters’ skins. Closeted queer hiding within an illegal system often have the ability to shift between the different parts of their identity with different people, sometimes so intuitively it seems like magic. These are stories that speak across generations. Queer oral history, books, and archiving are vitally important to preserve the fact that queers have always been here and you will not send us back to the darkest places.

The last theme I wanted to play with was a sensorium of New Zealand locations. My country is often culturally filtered at a second hand remove (Lord of the Rings), sweeping landscapes and sparse urban grit. I wanted the reader to smell the cold from the Southern Alps, feel the heat and dust of the nor’west wind, discover the ice-born chill of our streams and rivers, taste the humid green of the native bush, and feel the crunch of summer-brown pastures beneath their feet. This isn’t something a photograph, postcard, or a souvenir book can convey. It is something I work very hard on with each New Zealand based story I tell, my books trying to speak to and of the land.

From one book and generation to another. Translated from history to fantasy and delivered back to reality again. Stories speak to stories. The invisible is spoken and spoken and spoken again (as often as it takes, loud, soft, joyous and righteous and angry) into visibility. The Land Girls speaks to No Man’s Land. And maybe, hopefully, my book will speak to you, or another book, another story, another time, and continue the conversation.