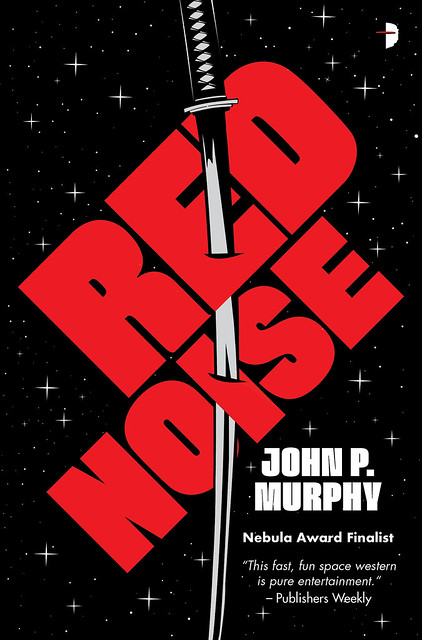 The creative advantages to anger: Are there any at all, ever? John P. Murphy says… perhaps! And explains how they were put to work in his novel Red Noise.

Red Noise is about anger. I wrote it in 2017, at a time when a lot of us were angry for good reasons. Maybe it’s fitting that it’s coming out when we’re angry again for very good reasons.

We’re conditioned to be wary of anger, even afraid of it. But it’s not just an often healthy emotion, it’s a vital one. I’m not enough of a student of history to definitively state this or that without putting my foot in it, but it seems to me that a lot of progress in our world only happened after people got good and mad about injustice. I have to have faith that the anger we’re all experiencing right now rocks this country good and hard, and paves the way for real change. We owe so much to people who came before us who got angry enough to disregard their own convenience and even safety. But because many of us are so uncomfortable with anger, we don’t like to talk about it, don’t often look directly at the emotion itself and think about it. I didn’t want to either, but in writing Red Noise, I realized I had to.

My book is in the tradition of a number of movies and books going back to Dashiell Hammett’s noir classics Red Harvest and The Glass Key. Those works inspired the director Akira Kurosawa to write and direct a samurai film, Yojimbo, which was in turn remade into a Western by Sergio Leone as A Fistful of Dollars with Clint Eastwood. Then it was back to gangsters with Last Man Standing and Bruce Willis. It’s had many other iterations. The plots vary, but boil down to this: a nameless protagonist comes to town and finds that town driven into the dirt by fighting gangs, and so this hero, a trickster, pretends to join them as a way of taking them all down. And, of course, does.

It’s common when writing genre stories to talk of being in conversation with what has gone before. It’s a little odd to find oneself in conversation with a single plot. I thought a long time about what lies behind events like these. It’s one thing to read it or watch it, because that goes by so quickly. But writing something new in that vein means answering hard questions: What can drive rivals to hate each other so much they’d rather turn Station 35 into a two-for-one funeral than give an inch? What might push someone who jealously guards her privacy to take a look at such a miserable place and decide to put her life on the line to try and fix it, for strangers? There are many powerful emotions that make people put their lives at risk for others, but this is a job uniquely suited to righteous anger. No matter how cool or jaded the protagonist, without that core it just doesn’t work.

I did a lot of reading and viewing, trying to find my way into this story. Cowboy Bebop; Romeo and Juliet; Sanjuro; The Good, the Bad, and the Ugly; The Count of Monte Cristo. I read David Morrell’s First Blood, the source for the first Rambo movie (it’s a lot more subtle and interesting than the film, by the way). All of them were fueled by anger in some way, all different. Sublimated, frustrated, betrayed, furious. Anger drives decisions that drive plots.

It is also notorious for driving bad decisions, though, and I was determined to show a competent protagonist. More than that, I refused to believe that being angry was truly inconsistent with being smart. I found a study in my reading that intrigued me: it suggested that anger can actually lead to better decisions. People experiencing anger when they’re trying to come to a decision, it seemed, don’t wait as long, they don’t compromise as much, and they are happier with their decisions later. All together, my reading helped me understand better how this primal emotion drove my plot too, how it helped and hurt the decisions people make, and it helped me see that central anger motive with all its many facets and dangers for the characters.

From the protagonist’s perspective, the story is about being clever and resourceful. But for the gangs and the crooked cops, it’s about being manipulated into self-destruction. And they’d be justifiably angry about that, wouldn’t they? I found I needed more characters. In particular, I introduced a pair of gangsters, Screwball and Ditz, to help me distill those thoughts in a different way from the protagonist. Their journey wound up disrupting how I originally thought about how things had to play out. More than that, I realized that I was wrong about where the tension was coming from. The reader isn’t worried that this badass might lose the fight; we’re afraid of her losing the fire. We’re afraid she’ll stop caring.

Writing this book with anger in mind was useful to me, but sobering too. It made me question why I found these stories so appealing, why in 2017 I needed to write about corruption being pulled apart at the seams. God knows we’ve all found that it’s possible to get tired of being angry. Why add to the pile?

What I realized, after first reading so many stories about anger and then writing one, is that we need the practice. We need to see it through in miniature, get a little taste of a small win. Living out anger on the page doesn’t lessen the fire: it stokes it.