I’ve been busy moderating comment threads today, but let’s see if there are five things in the world I want to talk about:

Tucker Carlson losing advertisers for being a blatant racist, again. Because, I mean, this isn’t exactly the first time, is it? Which does leave hanging just how many advertisers Fox News have, that they can keep shedding them for its premier program (I know, I know, some eventually crawl back. Even so). I don’t go out of my way to watch Fox News, but I see it now and again, and it does seem that it’s essentially propped up by ads for pharmaceuticals, gold investments, and, recently, Tom Selleck hawking the benefits of reverse mortgages. This suggests much about the Fox News demo, although honestly since I don’t watch CNN (or any other cable news network) all that much, I can’t really say if their ads and demo are really any different.

In any event, I don’t think Fox is too worried. If it came to it, they could fire Tucker Carlson, replace him with another preppy racist and then burn through that dude’s advertisers. Wash, rinse, repeat. It’s a nice graft, that Fox News.

Come for the inane ramblings of an incoherent bigot, stay for the easily transmittable virus! The Trump campaign wants you to know that if you come to one of its rallies, it can’t be held responsible if you catch the coronavirus. Which, on one hand, is probably going to be a standard-issue liability warning/disclaimer for any large event for the next couple of years at least, but on the other, yeeeech. Not at all the reason I would personally want to catch the covid. I also suspect that the transmission rate at a Trump rally would be higher than it might be otherwise, because of the right-wing fetish for not wearing masks because Real Americans™ Aren’t Afraid of Viruses, or whatever.  So, yeah, even if I were a Trump supporter, which I’m not, one of his rallies wouldn’t be high up on my list of things to do with my time.

I don’t mean to brag, he said, absolutely bragging, but it’s possible that I might have watched part of this in an editing bay sometime in February. It looked terrific then, and the trailer looks pretty great, too. It’s going to be on Apple TV, something which was a pretty big deal, because the movie was slated to go into theaters before theaters stopped being a thing people went to. It’s also possible that I got Apple TV+ just so I could watch it (I mean, they gave me a year for free after I bought Athena a new iPhone, so, you know. Why not).

Here’s an oopsie: The GOP basically cut and pasted the 2016 platform for its 2020 platform and in doing so left in criticism of the sitting president, who is, now, of course, a Republican. This will almost certainly be addressed in the near future, but it just really feels lazy and low-effort on the part of one of the two major parties of the United States. Mind you, I think it’s an acknowledgement that the official party platform isn’t something people pay much attention to, up to and including party members. But I think it would be okay to be a little less obvious about it.

Let’s end on a cat picture. Because why the heck not. You all like Smudge, and he… well. He tolerates you. 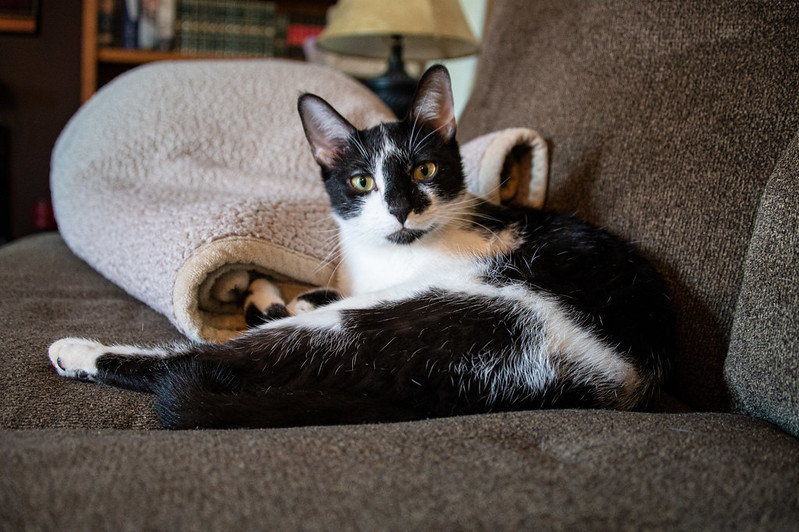 Have a great Friday, everyone, and a fabulous weekend.