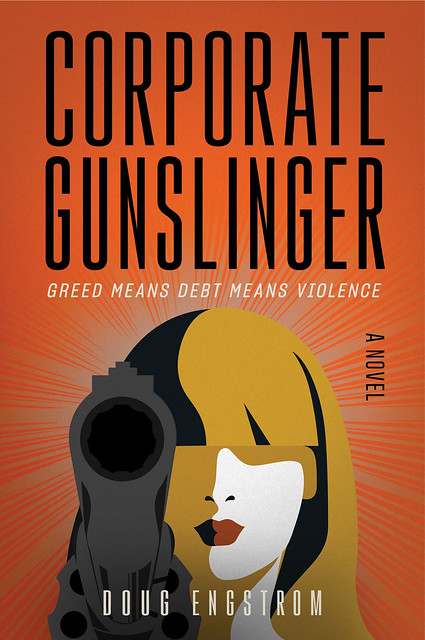 Doug Engstrom is thinking about today’s troubles and woes, and how some of them rely on people one thing and corporations… doing another. From there it’s just a hop, skip and jump to the world of his new novel, Corporate Gunslinger.

One of the things that’s appalled me as I’ve grown older isn’t seeing young people abandon the virtues I was taught while growing up, but rather seeing those virtues corrupted and weaponized by the people in charge for use against the rest of society, especially young people.

I’ve seen institutions cynically exploit honorable ideas like paying your debts and consistently striving for excellent work to wring more gains from the people they deal with. This use is all the more repugnant when those organizations have no intention of living up to the same standards.

Consider, for example, banks and other financial institutions shirking their obligations or offloading them on the public during the financial crisis, even as the continued viability of their businesses depended on millions of ordinary people regarding their mortgage payments as sacred commitments.

That corruption, and how people are recruited and trained to take part in it, is the Big Idea behind Corporate Gunslinger.

My protagonist, Kira Clark, believes in herself and her acting talent. Unfortunately, she becomes an orphan at nineteen, and without family to help or even advise, that belief manifests as a series of large loans to pay for an MFA and New York living expenses. She’s ultimately compelled to refinance and pledge her freedom as collateral – if she defaults, a “lifetime services contract” will allow her creditors to control every aspect of her life.

When she suffers an unexpected layoff, the final piece falls into place. Her fierce belief in her dignity and freedom make a lifetime of servitude intolerable, so she begins a frantic quest to avoid foreclosure. Help appears in the shape of an offer from TKC Insurance, an offer that includes a signing bonus large enough to square her accounts, and the promise of job that pays well enough to keep them current.

The small complication is that the job involves killing people.

Trial by combat is the final, deadly option offered to citizens shut out of the court system and dissatisfied with the dubious justice of mandatory arbitration. They can choose to face a company representative on a high-tech dueling field, armed with a single-shot pistol and supervised by the scrupulously neutral Association for Dueling.

Kira becomes one of those company representatives, given a year of intensive training that confers an advantage over most citizen opponents that is roughly equivalent to the difference between an NBA player and a basketball enthusiast who plays pickup games on weekends. However, that advantage is far from absolute. Although her chances of dying in any one duel are only one in twenty-five, her odds of surviving enough matches to fulfill the obligation incurred by taking the signing bonus are only about one in three.

So, Kira’s confidence, talent, and optimism have led her into debt, and from there, her desire to be free and lead a dignified life have transformed her into an effective and deadly tool for oppression in the hands of her employers.

Corporate Gunslinger is the story of how that happens, and how Kira reacts once she truly understands her circumstances.