For roughly all of its existence, this site has had a Site Disclaimer, Comment and Privacy Policy page, and from time to time I will make updates or emendations to its text. Today I made a fairly significant one and I’d like to talk about it a bit.

This site features content going all the way back to the 1990s. Pieces I’ve written here reflect my views and writing style at that time. A piece written years ago may not reflect my current thinking on a topic, whatever that topic might be, nor might it represent how I would approach the topic stylistically. It is often useful to check to see if there is a more current piece on the topic that better reflects my current thinking and writing style. There is a search function on the site.

Why have I added it in? Basically, because I’m not at 51 who I was at 29, which is how old I was when I started this site. I’m also not who I am when I was 35, 40 or even 45. To be clear, I think there’s a pretty strong through-line between 29-year-old John Scalzi and 51-year-old John Scalzi; I don’t think you would read something I wrote then and be confused as to who the author is. But twenty-two years is a long time. Times are different than they were at the turn of the century, and with that, some of my opinions are different, as are the ways I would choose to express them.

Having written here for more than two decades, I don’t think it’s possible or useful to go back and try to tweak the site’s contents for 2020s sensibilities; I don’t have the time, and even if I did the Internet Archive is out there with the originals. Generally speaking I’m not ashamed of anything I’ve written here, and I think there’s something to be said to having a record of who I was (or more accurately, how I chose to publicly express myself) over the time I’ve written here.

Consequently, with a few exceptions I have kept the text here as it was when I wrote it, plus or minus  edits shortly after posting, mostly for clarity or to remove unintentionally offensive things. Basically, it’s very rare for me to update a piece more than a couple days after originally posting. Thus, this site includes not a few pieces that I look at today and think eeeeeeh, I wouldn’t put it that way now, and at least a couple of actual and genuine fuck ups on my part. I have it as part of the site disclaimer that “I can be as full of shit as anybody else”; I didn’t put that in there just to be amusingly disarming. I have bad takes on a bunch of stuff on this site, and a few things I had to go back and apologize for. Pulling these from the site wouldn’t change the fact I wrote them at one point, and I’m okay with people seeing me in my full and flawed scope.

For all that, from time to time I have seen people pull something from the site from, oh, like, 2003, and post it elsewhere as if it was reflective of my current thinking, or how I might state things today. On one hand, it’s entirely fair to quote me, if indeed I did say something that one time way back when, and I wouldn’t stop someone from doing it, even if I could, and even if their intent in doing so is to paint me in a bad light. On the other hand, when someone does that, or if someone comes across something that I wrote way back when via a Google search or suchlike, and is confused/upset/angry by something I wrote, I think it’s reasonable for me to be able to say, “Yup, I said that then, and also, you might want to check to see if that’s still a position I would support.”

Because sometimes it is! But sometimes it’s not. And in all cases, further context is probably useful. I do think it’s all right to suggest that people over time might change their minds, or evolve their thinking, or be less of a raging dickhead, or however you want to put it. It’s especially helpful if there is textual evidence of that change, which, as it happens, I often have, because I’ve been writing here for more than two decades.

(Whether people will choose to believe that later text more accurately reflects my current beliefs is another matter. People will believe what they want to believe, and also, some people think I’m a smooth operator who changes his public opinions solely to stay in the good graces of whomever they believe to be the thought police at the current moment. I find this belief delightful; the fantasy version of me they have in their head is far more industrious and canny than I am in real life.)

I will additionally note that I have not achieved my final form; the 55-year-old John Scalzi will be different from me today, and the 60- and 65-year-old versions of me more different still, and so on. This site, as long as it exists, is made by the current me, who very quickly becomes the past me. I suspect there will always be things here that the then-current me will look at and say “huh, I’d do that differently today.” It’s part of being a human, and (hopefully) growing and thinking and changing as you go along.

I’m back from the dentist! What five things am I thinking about now? Here they are!

Trump stuffed on DACA: Aaaaah, there’s that contentious 5-4 ruling I thought we might get earlier in the week. And because it was written by Roberts, it’s one of those “it’s not that your intention was bad, though it might be, who can say, but you went about it in not quite the right way” rulings, i.e., nitpicking. But it does the job, i.e., protects the “dreamers,” because even if the Trump administration somehow managed to become competent, any new attempt to boot the dreamers would drag on into either Trump’s second administration, or into Biden’s first one. If the latter, then it’s not going to happen at all; if the former, well. So much contingent on Trump and his people suddenly becoming competent.

After the ruling, Trump went to Twitter and whined that the SCOTUS didn’t seem to like him. Someone correctly noted that they’d like him better if his administration made better legal arguments. But don’t worry, the Supreme Court still has a chance to block access to his tax returns. And then just like that they’d be in Trump’s good graces. But that’s for next week (probably); until then, the dreamers and their allies should take the win.

Live Nation to musicians: Drop Dead: The leading live events company in the US is trying to use the coronavirus to drastically revamp how it does its festivals business, mostly by trying to scale back how much money they have to give musicians and increasing their penalties for cancelled shows, and shifting some of infrastructure burden onto musicians. I, uhhhhhh, don’t imagine these changes will be popular, or will go unchallenged, although since Live Nation is the biggest company in its field, I don’t know if there’s much that can be done on the part of individual bands. Perhaps collectively? It would be interesting if bands everywhere just swore off Live Nation festivals. Right now would probably be the best time to do that. The festivals aren’t happening anyway.

The Darke County Fair is a go: Are county fairs a thing in 2020? The one in my county will be! It’s scheduled to take place in August (i.e., its usual time) and it promises it will be in keeping with all state health guidelines, etc. Which I suppose is nice, but I’ll probably sit this one out. As much as I love county fair food — everything deep fried and usually covered in some sort of batter — August will still be too early for me. Also, the Bradford Pumpkin Show is in October, and I can fill up on fried foods then. I can wait. The fair still more than two months away, however, and Ohio is doing okay with its infection rates. We’ll see.

Watchmen series free to watch this weekend: If you don’t already have HBO in some iteration. It’s timely because much of the plot of the miniseries is rooted in the 1921 Tulsa massacre of black citizens and the repercussions (in the Watchman universe, at least) that propagated from there. The series was apparently the first time many (white) folks had ever heard of the Tulsa massacre, and I might tsk-tsk at them for that except that the first time I ever heard of it was in association with Rosewood, a 1997 film by John Singleton, about a similar event in Florida, so I’m not any better in first hearing about a bit of history from Hollywood.

(Pro tip: it’s okay if Hollywood is your first contact with a bit of history, but don’t let it be your last. Hollywood never gets history correct; that’s not Hollywood’s job.)

I was genuinely impressed with the Watchmen series, which I honestly expected to be something of a trash fire. In fact it is one of the best pieces of comic book-inspired entertainment in the last several years, which is in fact saying something. If you’ve not watched it yet, binge away.

And how did your dentist appointment go, Scalzi? Better than I expected! I thought I was going in to get a crown but in fact just had a filling done. But I didn’t exactly dodge the crown — it still needs to be done, I’m just having it done in July, along two additional fillings. They’re all right next to each other so we’ll be making an afternoon of it. Fun! I would like to know how my teeth became total crap in the last decade or so, honestly. I suspect it might have something to do with living in a place where I have unfluoridated well water. In any event, I have more dentist time in my future. I can’t say I’m excited for it, but better to have it done than not. 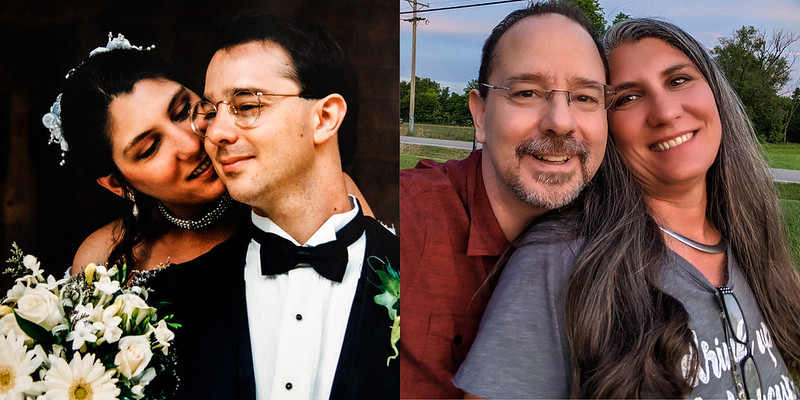 A quick thank you to everyone for all your kind thoughts and wishes regarding our 25th anniversary. We had a good day. And now we’re off to the next 25!

(Well, I’m more immediately off to the dentist, to get a crown. But you know what I mean.)

Also, here one more photo from yesterday. Krissy is obviously in the photo, but I am too, sort of. I’m the reddish fuzzy blob reflected in the silver balloons. Maybe focus on Krissy instead. That’s what I do. 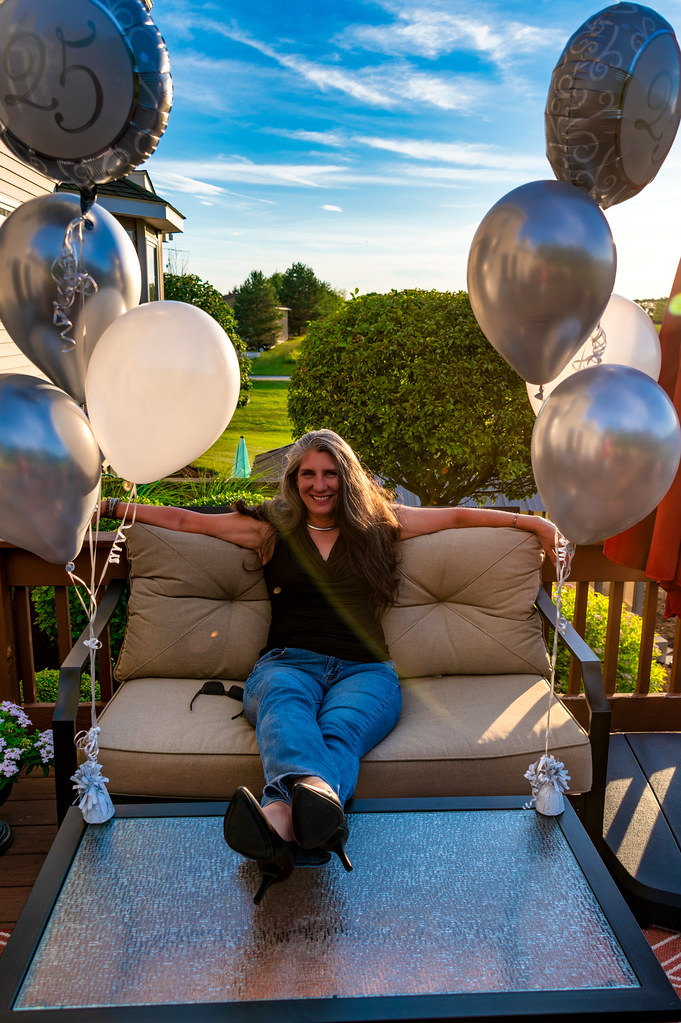