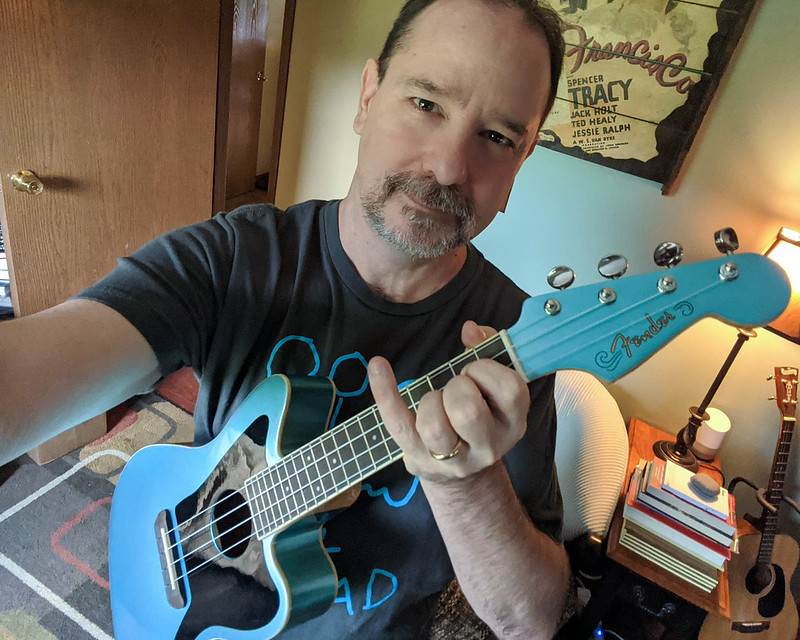 Meet my newkulele: Get it? Huh? Huh? Huh? It’s a Fender Fullerton Jazzmaster ukulele in Tidepool Blue; you can’t tell very well in the photo but it’s sparkly. I have several ukes in the house so I didn’t really need a new one, but — look! It’s like a tiny guitar! It’s so cool! And anyway it has a couple of features I wanted that none of my other ukes had, and also it was my vastly belated birthday gift to me, so. These are my excuses. It sounds nice and plays well and like all my musical instruments its true limiting factor is the person playing it. I’m enjoying it regardless.

Europe considering travel restrictions on US residents: I mean, I would, in their shoes. They actually made an effort to tamp down coronavirus transmission, while we basically farted about and can’t get a sizeable percentage of our population to wear a friggin’ mask. I traveled to the continent last year and was happy to have been able to have the privilege, but I totally understand if they’re not in a huge rush to have me back. They know where I’ve been, i.e., here in Covidvania.

Speaking of travel restrictions: Severe restrictions this year on the Hajj, the journey to Mecca every ablebodied Muslim is enjoined to make at least once in their life. Mllions usually go each year; this year it will be limited to 10,000. Which is wild. And historic, as the article notes that the last time restrictions were this severe it was because of Napoleon. That’s… a lot to take in. Sympathies to my Muslim friends.

Covid claims another theatrical release: This one the new SpongeBob movie, which is now to be released on VOD and then on CBS All Access. This is not terribly surprising and also a pretty safe bet, since the movie’s audience is (generally) young enough that having them watch it at home is probably a better idea anyway. As a long-time movie industry watcher, it’s been interesting watching which films are ditching the theaters, and what that means for Hollywood’s confidence about people going back to the cineplex. So far it’s kid’s films and indies that have made the switch, which again, have been safe bets for skipping theaters entirely. The only film with a truly significant budget to make the swap so far is Artemis Fowl, which a) is still a kid film, b) was shaping up to be a flop so it didn’t hurt Disney much to do it (they saved millions on global publicity budgets). When someone releases a $100M+ adult franchise film to VOD, that’s going to be an interesting day.

Speaking of ukuleles: The Cure’s “The Lovecats,” done by the Ukulele Orchestra of Great Britain. You’re welcome.