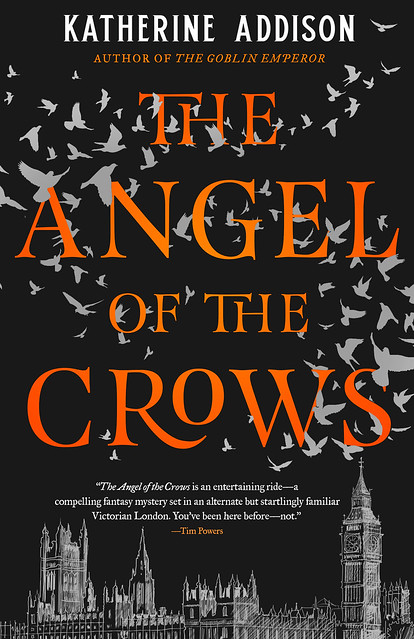 When Katherine Addison gets hold of the Victorian Era in her new novel The Angel of the Crows, she does things to it that no one expected — possibly most of all herself. Here she is to tell you how and why she’s done what she has, and why she had so much fun with it.

Disclosure: I read this book in galley and liked it enough to provide a blurb for it.

I started writing The Angel of the Crows when I was in a particularly bad spot. I was depressed, I was stuck, nothing seemed to be working. So I had this goofy idea about Sherlock and angels and said, I’ll never publish this, but I’m sure not writing anything else right now, so what the heck, and started writing.

I wasn’t going to publish it. It was obviously too weird. But if it was already too weird, that gave me freedom to throw in anything I wanted to. Angels and vampires and werewolves and steampunk watchdogs and I had to have hell-hounds, and a giant airship mooring tower in the East End of London, and then why not Jack the Ripper? I started calling it my kitchen-sink novel.

When my editor asked me what I was working on, I told the truth.

The novel is built around the Holmes stories, and part of the game I was playing was to see how far I could twist them by putting them in this new context, where people don’t get addicted to opium, they get addicted to vampires, and a hell-hound is actually the most reasonable explanation for what killed Sir Charles Baskerville.

The novel is also built around the historical case of Jack the Ripper. I have done a lot of reading about Jack the Ripper, and this was a chance to pull out an always popular what-if: what if Sherlock Holmes had taken the case of the Whitechapel murderer? It was a chance to put all my reading to good use and a chance to try the tiniest bit of historical fiction. (The Thames Torso Murderer is real, too.) My conclusion from this is that historical fiction is extremely damn hard to write. You have to make choices about things that are historically undecided, like how many victims Jack the Ripper had. (I voted for six.) I followed the historical timeline exactly, and the things Crow reads in the papers about the Whitechapel murderer are things the newspapers really said.

The temporal structure of the novel—the timeline—is Jack the Ripper. The thematic structure is the Sherlock Holmes stories, and combining the two was a complicated venture. It should be acknowledged, though, that I made no attempt to follow any kind of Sherlockian canonical chronology—I’m wrong from the start, since A Study in Scarlet begins in 1878 and I had to move things up a whole decade to get to August of 1888 and the murder of Martha Tabram. (In this world the Second Afghan War drags on for ten years because there are fallen angels and they are very bad news.) And Conan Doyle himself never tried for any kind of continuity between stories (except that “The Adventure of the Empty House” has to take place after “The Final Problem”). So chronology there is what I say it is for the purposes of the larger story.

I used as many Sherlock Holmes stories as I could, starting with A Study in Scarlet and finishing with “The Adventure of the Speckled Band.” I took them apart and recombined them; I let them gambol a bit. I increased women’s speaking parts. I repurposed some characters and made up others; I rewrote the Andaman Islander in The Sign of the Four; I mixed in the occasional historical person. This is truly my kitchen-sink novel.

Ultimately, the Big Idea of The Angel of the Crows centers on the Sherlock Holmes stories. By putting the stories in a new setting, and by putting the detective up against a mystery that has baffled real-life detectives for more than 130 years, I’m offering my own commentary on the stories and their late Victorian milieu and the place they continue to have in our culture. And having a lot of fun doing it, too.