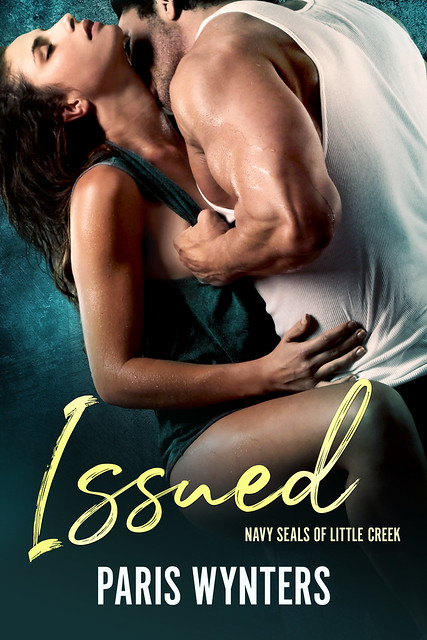 For Issued, author Paris Wynters looked at marriage and the military, and a speculative way at combining the two of them to create her story.

Writing has always been a way for me to express myself creatively. Ask me to draw, you’ll get stick figures. Color, not so great at that either even if I do stay in the lines. Decorate my living room, it’s as plain as when I moved in. But write a book, I can actually do that. So, when at a gathering with a bunch of friends, many of whom happen to be veterans, the topic of conversation came to dating, divorce, and marriage an idea sparked for a story.

After doing some research (mostly to make sure some of the high figures friends had mentioned were actually true), a big question stuck in my mind over and over: After hearing over and over that if the military wanted you to have a wife, they’d issue you one, I began to wonder what if they actually did issue spouses? Who would actually sign up for a program like that and why?

In doing some research, I found out there were many reasons people married into the military. I remember coming across a story about two friends who got married because one of them needed insurance, another where the military member had gotten married because of increased salary and other perks. But I wanted to go deeper. So, I started asking myself what would make me join a program like that.

One thing came to mind right away. Community. While I have close cousins who’d grown up with a father who was away all the time, aunts running their households and hosting holidays without their husbands present, they always had a built in community. And I loved that. It’s something I have found is hard to find in my own civilian life.

My heroine started to develop and take shape, because belonging is something we can all relate to. Sometimes I think people forget that belonging is an aspect of life adults deal with as well as teens and younger kids, especially as our circumstances change. It’s also an area that some of the veterans I know had mentioned being a reason they missed the military as well. They hadn’t found a comrade, a tribe, like they had when they were active duty.

Once this concept of belonging took hold, it also steered how I wanted to approach my novel. It needed to be focused on home life, not a romantic suspense where the military member and the love interest got caught up in a mission of some sort. One of my favorite TV shows came to mind—Army Wives. And what better reason for a Netflix (or maybe it was Hulu) binge than research. Well, it wasn’t my favorite show when it was actually on TV, it was my mom’s favorite show. And I used the opportunity to spend more time with my mom as we watched it together at her house, something I wished I had done more of with my father before he died.

The hero came together a bit easier for me. Sure, he’s a bit surly like two of my uncles, and is stubborn when it comes to his health (like my dad had been. I mean, he had lung cancer and would “take walks” to “secretly” smoke a cigarette, yet the neighbors would rat him out. Not to mention smelling like cigarette smoke the moment he came back home). I am smiling now as I remember the ways he would come home acting all innocent, the same way I had when I incorporated that part of my dad into the hero. My dad was quite the character.

Writing Issued also forced me to take a look at relationships, including my own. This was probably the toughest part of the book for me, because it caused me to face some of the not great parts and even to examine where I had faults. Like what does it mean to truly accept your spouse? How do you trust someone to see you at your weakest, especially when society dictates you should be strong? And how do you forgive, especially forgiving yourself? For someone who doesn’t trust easily like me, at times this book became hard to write emotionally because I felt like I wasn’t “practicing what I was preaching.”

Overall, I wouldn’t trade the experience I had writing this book for anything, even if it meant I didn’t have to do half of the rewrites my editor asked of me. I came out of the experience having spent more quality time with family members, learning more about their struggles and good times. I got to remember and incorporate my father in some ways into the book. And I came out with a deeper respect for active duty members of the military, their spouses and their families.