The last one of the month! Let’s get to it.

So will there be any more “Five Things” after today? I think so! It’s a good, quick format for me, in that it covers a lot of territory regarding things I’m thinking about and/or want to share, and makes for lively comment threads that (at least so far) don’t get too bogged down on a single topic. And it gives me new stuff here on the regular, which I like. It doesn’t seem to have stopped me in going deep on specific topics I want to go deep on, either, which I was curious about. It seems like a good and useful feature, and I think I will continue it.

Will I continue to do it daily? I think I’ll aim for dailyish, which is to say if I skip a day because I wrote a longer piece, or just decide to skip it for a day because of reasons, that’ll be fine. And sometimes if I only have three or four things, I might say “close enough” and post that. But generally speaking it’s not difficult to come up with five things. So, yeah, let’s keep doing this thing for now. If I get bored with it later, I’ll drop it! But I’m not bored with it yet.

Carl Reiner, RIP: This is one of those “you knew it was coming, and you knew it was probably coming soon but still” things. The man lived to 98 and you can’t say that’s not a good run for anyone, and in his case his run included being one of the acknowledged masters of modern comedy, so there is that. My favorite thing of his was the “2,000 Year Old Man” bits he did with Mel Brooks — Reiner modestly gave Brooks the lion’s share of the credit for that, but a two-hander bit of comedy needs both hands. It wouldn’t have worked without Reiner. I liked it enough that I did my own version of it, once. It was okay. Reiner did it better. Farewell, sir.

The “Russian Bounties” thing is gonna stick, I think: The President has been saying he hasn’t been briefed on that thing, but all the evidence points to the contrary; the best you can say is that Trump ignored the material because some didn’t distill down to a single sentence and speak it at him veeeeery slooooowly, because apparently that’s what you have to do if you want the President to know something that didn’t come from a Fox News morning show or OAN. But that doesn’t make things better; it makes things worse. It’s really hard to spin “The Russians are paying for American deaths”; it does directly to the heart of the Trump constituency. Trump (or his administration) knew and did nothing about it, and it’s possible American soldiers are dead because of it. That’s going to stay.

Lights out on Broadway: Through January at least. Your further reminder that 2020 is going to be a strange, lost year, entertainment-wise. Movie releases scheduled for July have been pushed back in August, and I suspect will now be pushed back even further than that, because, surprise! Turns out the coronavirus didn’t give a shit whether we were all bored and hated masks. So rude, honestly! At least we have Hamilton on TV later this week. But that’s not exactly comfort to everyone in NYC theater currently out of a job, and out of a job for another six months at least.

Oh, look, arty roses. Krissy has upped the flower quotient around the Scalzi Compound recently and I’ve been having fun taking pictures of them. Here’s a picture of our miniature rose bush, done up in “handpainted monochrome” style. Enjoy. 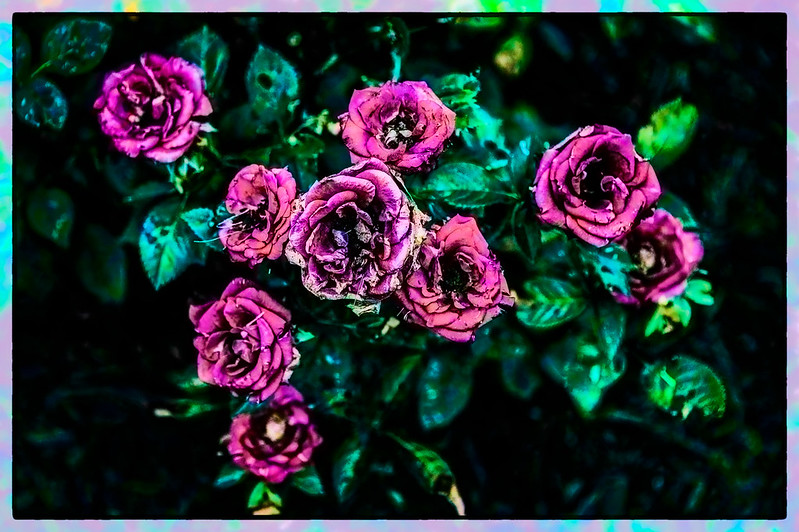