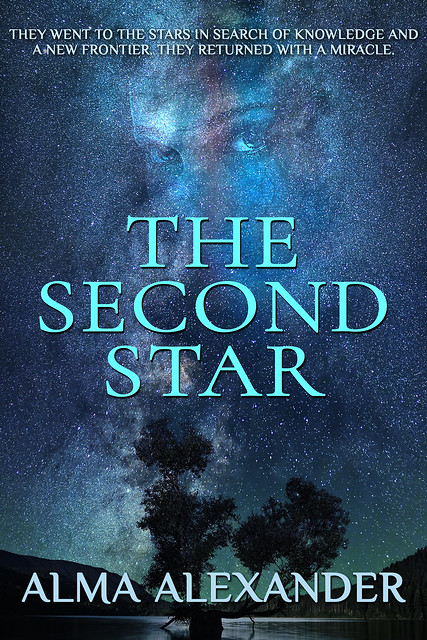 In this week’s Big Idea for The Second Star, author Alma Alexander goes big… and then gets small… and then tells how it’s all connected.

There isn’t just one Big Idea in The Second Star – there are half a dozen of them, interwoven into a complex story tapestry. This is at once a story about voyaging to the stars and coming home again, about our other selves hidden inside of us, about what people are willing to believe and to endure for the sake of that belief. But what it all boils down to is macro and micro universes.

There is an incredible video which starts with a closeup of a woman’s eye and then spirals out, showing her body on a sward of grass, the park she is lying in, the city, the country, the earth, the solar system, the galaxy, the galaxy cluster, into deep space…and then back, into her eye, diving deep inside her body, her veins, her red blood cells, her DNA, her molecules, her atoms.

It is all linked; it is all one; we are starstuff, as we are reminded by the poetically minded scientists (or the scientifically inclined poets) amongst us.

We know almost as little about what goes on in deep space as we really know about what happens inside a human mind, a human soul, and The Second Star is in essence that woman’s eye in that video, vision turned inward and outward, a bridge between two worlds.

This is a story about how something OUT THERE – out amongst the unknowable stars which are still shining in a dangerous here-be-dragons expanse, in which literally anything might be possible – meets something inside a human mind and human soul, misinterprets what it finds, changes everything it touches, and then leaves the shattered human beings to battle with the consequences.

We all love our science fiction aliens – but the truth of it is that a truly ALIEN alien would leave us floundering in a morass of incomprehension because there may not be a way to make one of us understand the other. There could be mistakes made in the way the alien perceives us – which leads to unspeakable consequences, not necessarily because the alien entity wished to hurt us but because it was simply ignorant of what causes us hurt. There could be our own utter misinterpretations of the aliens’ contact with us to the point where we might have built worlds and worldviews on completely misunderstood phenomena (and what would it do to us if a glimmer of true understanding was permitted to spark through?).

The Second Star is science fiction – but in the end, the ‘fiction’ is a story about people, and what they would do when faced with a ‘science’ which changes everything they thought they knew, changes their most deeply held beliefs.  It is the irresistible force of change and of the sheer pure strangeness of the universe, meeting the immovable object of our fundamental humanity and how we might respond to such a shattering stimulus.

In my story, it’s what frightened and intractable authorities (secular and sacred) might do to preserve their hold on power. It’s about how far someone who is ‘just obeying orders’ is willing to go. It’s about how much honorable, dedicated, and empathetic people might be willing to sacrifice on behalf of someone whose care has been placed in their hands.

And finally it’s about what human beings with the immeasurable courage to take their lives into their hands and go out into the universe on behalf of all of us here on the home world would need to face in order to accomplish their task and fulfil their vision, and about the very real possibility that such people may never truly be permitted to return to the place they left behind.

This is a Big Idea novel which is really a bridge spanning several Big Ideas, knitting them into an even bigger whole.

Just remember. We are all starstuff.

Taunting the tauntable since 1998
John Scalzi, proprietor
Athena Scalzi, editor/writer
About the site