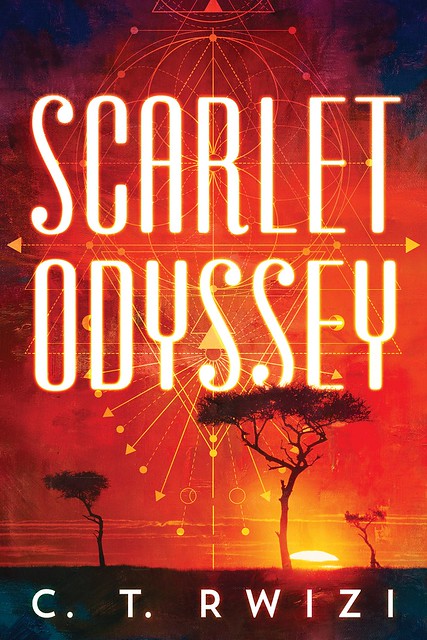 Many authors have learned that just because a character comes out of your own head doesn’t mean they won’t fight you from time to time. Author C.T. Rwizi learned this very thing while writing Scarlet Odyssey. The details await you below.

The big idea behind Scarlet Odyssey begins at my little sister’s preschool graduation some years ago. All the kids are lined up in front of the seated guests, and we’re at the part where they each introduce themselves and tell us what they aspire to be when they grow up. Most of the girls want to be doctors, scientists and nurses. Most of the boys want to be engineers and police officers. There’s a pilot here and there, a president, and a judge. All the things many African parents wish for their children.

Then one boy breaks the mold and says he wants to be a nurse, like his mother. Instead of applause, he is greeted with a smattering of snickers and scornful laughter. Not from his peers on the stage with him, mind you, but from the adults in the audience.

This incident isn’t precisely what inspired me to write Scarlet Odyssey, but it was on my mind as I built the world. I wanted to explore how societies often place arbitrary gender restrictions on roles that, in and of themselves, often have nothing to do with gender. But instead of the very respectable profession of nursing—which is more vital today than ever—I decided to use magic as the vehicle for this exploration. The main character, Salo, is a young man whose affinity with magic, considered womanly in his society, puts him on the outs with his clan and his hypermasculine father, brothers and uncles.

Now, I didn’t want to fall into the stereotype that only gay men choose roles traditionally associated with femininity; this is simply not true. But I felt compelled to extend my exploration of gender roles into an exploration of sexuality, and I also wanted to write a character I’d personally never read before: a gay kid from an African-inspired setting.

So that’s what I did, and I was having a blast. But as I became more serious about the project, I started to get cold feet.

“Come on, Rwizi,” I said to myself. “You live in Africa. In a very Christian neighborhood. What are people going to think of you if you go through with this?”

The truth is, I didn’t want to find out. So I started to change Salo and his story, succumbing to the very same social pressures I was trying to have him face and surmount. I turned his love interest into a brother to remove the romantic component while keeping their relationship close. I made him flirt with young women. I tried to justify my decision by saying, “Well, wouldn’t it be more interesting to write a story about a man who doesn’t conform to his society’s standards of manhood but is actually straight?”

What I discovered is that once a character becomes alive in your mind, they can develop a personality distinct from yours, the author. They can want things you don’t want them to want. Say things you’d never say. And if you attempt to write them in any other way, you’ll feel like you’re trying to put on a shirt several sizes too small.

The shirt will fight you. Put too much force and it might even tear apart at the seams.

And this is precisely what happened to my story. I developed a serious case of writer’s block. Salo’s scenes in particular became impossible, and never felt right no matter how long I slaved over them. Every time I made him flirt with some young woman, I could almost feel him frowning at me from the shadows of the closet I’d shoved him into, like he disapproved of my attempts to mischaracterize him, to deny him his right to exist as he was.

The sense of guilt I felt was very real.

So, naturally, I decided to do away with his sexuality altogether. Sanitize the whole thing so I didn’t have to deal with it. No love interest, no attraction, no controversy. Problem solved.

Admittedly, I had more success with this approach. I completed the manuscript, and it was good enough to land me an agent and a publishing house. But my editors sensed that something was missing and encouraged me to fill in the blanks. Salo was blurry at the edges, they said, and while they found him sympathetic, I’d deprived him of a certain je ne sais quoi I’d bequeathed to the characters around him. They felt I could do better.

I was forced to finally look him in the eye, and in doing so, look myself in the mirror and admit that there’s such a thing as artistic honesty. It’s not just about writing what you know, but also what you feel, because other people will sense when you’re holding something back.

When you’re not being authentic.

I’d made the conscious choice to deny my character his sexuality so as to avoid courting controversy, and my work suffered as a result. But when I finally allowed myself to be completely honest about who Salo was, I achieved a level of characterization that had previously eluded me, and a more profound exploration of the themes I’d set out to address in the first place.

It was like a weight coming off my shoulders. And while I’d always loved my story and the world I’d built—I couldn’t have finished the work otherwise—now I was completely, wholly, unreservedly in love with it.

I have no regrets.

← Nikon D780 Followup Report
This Tweet Did Not Age Well →