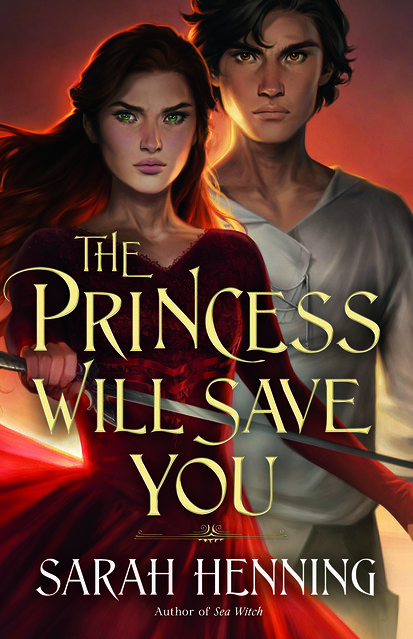 From the title alone, The Princess Will Save You suggests there will be some trope-flipping involved in the story. But as author Sarah Henning explains in today’s Big Idea, flipping the trope isn’t enough. There has to be more.

The Princess Will Save You is the story of Princess Amarande of Ardenia, whose commoner true love, a stable boy named Luca, is kidnapped in a bid to push her into a political marriage. But rather than play the game, she changes it—setting out to rescue Luca, and possibly her kingdom’s future in the process.

The Big Idea behind The Princess Will Save You is, as evidenced by its title as well as my short pitch, to take the classic damsel in distress trope and turn it on its head.

I’m not the first to do this and I won’t be the last—there is literally a thousand years of “rescuing the damsel” literature to flip, explore, unpack. Snow White, Sleeping Beauty, Princess Buttercup (who was a big inspiration in my tale)—the damsels march on, one after one, throughout our collective consciousness. They are sometimes main characters, but most of the time not—a prize to be won, along with their adoration, via brave rescue.

In this case, it’s the princess with a sword doing the rescuing, and the title itself is a hint to the fact that the boy she’s rescuing believes she will. Luca flat-out tells his kidnappers Amarande will come for him, and of course is treated to the pitying laugh of someone who doesn’t believe him: “The princess will save you. Yes, yes, that’s right. That’s how all the storybooks go.”

I think it’s crucial to tell stories with female characters that have agency and stand up for themselves. But, at the same time, I think it’s important to explore the trope itself. A simple gender-swap does nothing to really examine the roots of this trope and subvert them.

To that end, there are several layers I wanted to examine in consideration of the damsel and what is typically missing from her story arc: character agency, mutual consent, and a challenging of patriarchal power structures.

And, most often, the way the story ends, she can’t help but fall in love with her rescuer.

It’s easy to see why the “damsel in distress” has become such a popular archetype across cultural lines. In one tidy plot line it showcases the helplessness of a victim, the bravery of her savior, the evil of the rival/witch/mystical creature who put the damsel in such peril in the first place, all the while giving the audience a natural beginning, middle, end of a hero’s journey.

And beyond just being the scaffolding for a good story, the damsel trope also feeds into a strong pull of human nature: we want to believe someone will value us enough to save us. If we are in a bind and can’t rescue ourselves, we want to believe someone will come for us. Again, the lean-in toward popularity from this angle is easy to understand and hard to deny: whether it’s a natural inclination or something that is culturally ingrained, this ideal is reinforced with every damsel-type climax we consume.

The problem is that because for the last bajillion years, women have been cast as damsels, and, thus, are often reduced from a being with free will to something of value.

They are the golden reward on the treasure map. The Holy Grail. The item to be acquired.

No consent, agency, or testing of patriarchal powers in any of it from page one in this set up. Therefore, simply by flipping the roles, we can examine our own gender norms while examining both sides of the rescuer-damsel paradox.

In The Princess Will Save You, Princess Amarande struggles against those same conceits, despite the fact that she is not in the damsel position.

Though born into power, Amarande faces a very similar struggle to the classic damsel simply because she’s a woman in a purposefully hyper-patriarchal world. So much so that when her father dies, she cannot rule on her own without marrying even though she is the king’s sole heir. Despite her blood, or maybe because of it, she’s something to be claimed.

This grates on Amarande because she was trained from a very young age to be a warrior, and now, here she is, an object to be won by scheming royals, eager to take control over her kingdom, via ring and vows. Plus, she’s sixteen, and in love with her best friend, and not interested in giving away her birthright to someone who may or may not have killed her father.

She feels at a loss and plans to do something about it…which leads to Luca’s kidnapping. He is someone she values—making him the perfect blackmail. And thus, the damsel trope is in effect, upside-down.

It would’ve been easy enough to create commentary around how we treat damsels by making my male-in-need-of-rescuing, Luca, in the image of previous female damsels. Helpless, shrinking, fainting. You know the type.

But having strong women on the page does not mean the men must be weak or dull or less in any way. Luca is only a damsel in the sense that his true love comes to rescue him.

And isn’t that the story’s purest thread? Seems like a Big Idea to me.