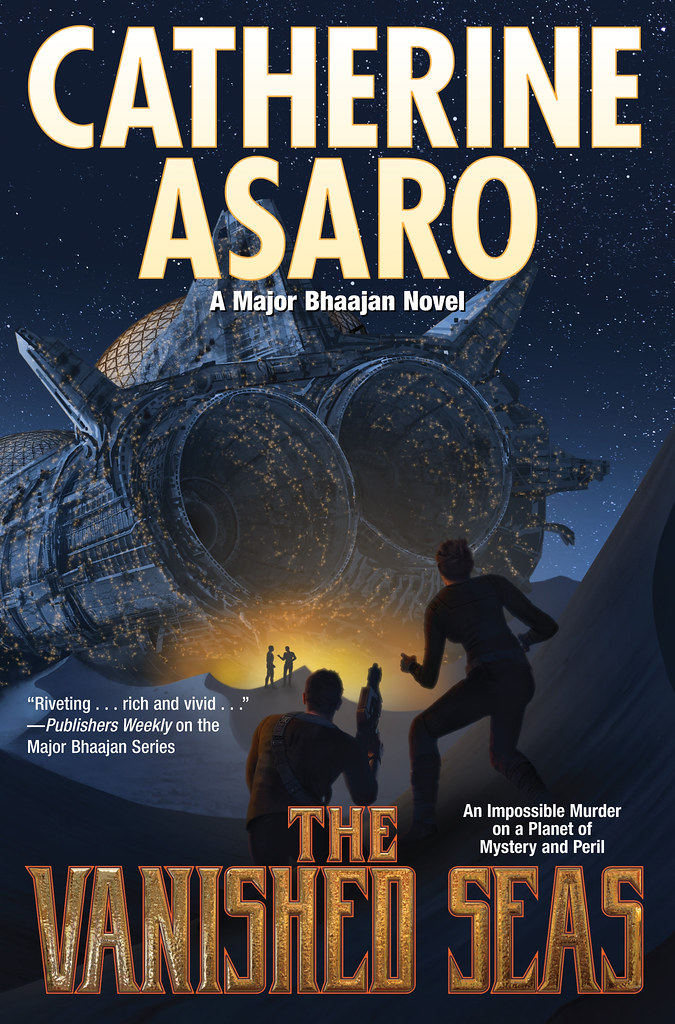 Finally! An author brave enough to give an answer to The Question all writers get! The author: Catherine Asaro. Her newest book: The Vanished Seas. Her answer? Read on!

“Where do you get your ideas?”

The dreaded question. It’s also a good one, deserving a good answer. Unfortunately, I never have a good response. The best I can muster is, “I don’t know.” Ideas percolate in my brain like in an old-fashioned coffee maker, and I can’t say what happens before the coffee pours out, rich and fragrant.

So I imagined the Undercity, where part of The Vanished Seas takes place. The Undercity exists in the ancient ruins beneath the City of Cries. The wealthy citizens of Cries consider it a slum, a place sparsely populated by drug-dealers, the homeless, and the elusive Black Mark, an illegal casino that entices the Cries glitterati.

However, the Undercity is far different than outsiders imagine. Isolated for thousands of years, her people evolved their own civilization, an achingly beautiful culture, yet one that can also crush the soul, with poverty and grace existing side-by-side, light and darkness, the violence of life combined with exquisite arts.

Outsiders can never find the true Undercity. The extraordinary ruins where her people hide spread for many square kilometers under a desert called the Vanished Sea. Although some back and forth exists with the outside world, no one can enter who doesn’t belong. If outsiders venture into the ruins without an invitation, they’re lucky to make it out alive.

In some ways, the Undercity offers a darker version of the Camelot legends, with its tales of a shining place that no longer exists, having vanished into the mists of history. My intrigued readers wanted to know where those ideas came from. I’d never have found an answer if I hadn’t become involved in a seemingly unconnected and far more mundane task, helping to write the Wikipedia entry for my high school.

I attended John F. Kennedy High in Richmond, California not far from Berkeley and Oakland. People often describe JFK as inner-city and urban. I’ve never felt easy with those words. It’s true that the school lies within walking distance of downtown Richmond, with its attractive public library and county buildings, but mostly residential areas surround the school. Is that urban? Inner-city? What do those words even mean? I’d suggest they are a code that implies a primarily minority enrollment, lower income levels, and a higher crime rate.

JFK also once ranked among the top public high schools in California. In its earliest years, it offered a model of what an urban public school could become at its best. Harvard came to recruit. Athletes won scholarships. Graduates became state district attorneys, celebrated musicians, scientists, doctors, NPR correspondents, and authors. Richard Mitchell, the first Black student to rank among the top speakers in the National Forensics League, became City Planning Director for Richmond. Judy Tyrus rose to stardom in the Dance Theatre of Harlem. The lawyer Christopher Darden of OJ Simpson fame attended JFK. Salim Akil, a co-producer of the show Black Lightning, graduated from Kennedy.

Many considered JFK a model for successful integration, with a student body back then about half Black and half other races, primarily White, Hispanic, and Asian. The school also pursued an innovative approach to teaching, with flexible scheduling similar to a college. That isn’t to say JFK had no problems; violence, drugs, racial tensions, and crimes exacted their toll, and the price we paid for that toll also lives in my memories. Yet that went hand-in-hand with an enthusiastic young faculty and a vibrant student body.

But what makes Kennedy even more distinctive—what has spurred articles and an entire masters thesis on the school—is how over the course of forty years it went from being a flagship of the California public education system to one of the worst schools in the state.

The changes at Kennedy arose from a perfect storm of disasters, starting with the unintended consequences of the Serrano legal rulings for California education, followed by the ravages of Proposition 13, the loss of industry in Richmond, and shifts in district policies. The decline was gradual but inexorable. In recent years, JFK has rebounded, as the school district climbs out of a slump that lasted decades.

Knowles Adkisson at the Berkeley Graduate School of Journalism explores the reality of the school in his 2018 masters thesis titled Kennedy High School: Fall of an Educational Camelot. Many people refer to the early decades at JFK as the Camelot years, evoking the term used to describe the administration of President Kennedy, the school’s namesake, and also the song lyrics from the musical of the same name: “Don’t let it be forgot, that once there was a spot, for one brief, shining moment that was known as Camelot.”

Is it true that for one brief moment, an inner-city public school defied the stereotypes and shone like a star? I would argue the magic never left; it still exists, often unseen by the outside world. You may not find the true soul of the community if you don’t know the city; you risk your safety if you go looking in places where you don’t belong. But the beauty thrives.

Adkisson’s thesis traces the history of JFK—and it hurt to read those words. I remembered how we believed our generation stood witness to a new age of tolerance and equality. Together all of us, black, brown, and white, could solve the problems of the world and usher in a brighter future.

So yeah, we were naïve.

But we weren’t wrong. The push-back we’re seeing now in the country echoes a backlash against those dreams of past generations. It isn’t that society hasn’t made progress, but that the progress terrifies some. Yet change never stops. Attempts to turn back the clock ultimately fail.

Did I think about all this as I wrote The Vanished Seas? No. If not for the Wiki article, I wouldn’t have recalled it at all. The Undercity is an original creation, a fantastical place immersed in science fiction.

I see my childhood interwoven with that world. I didn’t grow up in poverty; I came from a middle class family. Many of us at the school did, despite the implications of words like inner-city. Even so, I lived a markedly different youth compared to that enjoyed by the kids I met at UCLA, students from places like Beverly Hills and Pacific Palisades. When I went to Harvard for graduate school, I felt the weight of its traditions. I loved being a student at both schools, and I’m grateful for the doors that my degrees opened. But I felt a certain distance. It wasn’t only that in the late 1970s, I was often the only woman in my graduate physics and math classes. I also discovered my peers couldn’t relate to my background. Although I didn’t consciously stop talking about it, I realized as I put together this essay that it’s the first time I’ve written about my experiences at Kennedy.

I grieve the contrast of today’s world with the glowing idealism we carried as teens. But I also feel hope. Dreams like Camelot never truly vanish. They live within our communities, within every person who dares step outside the boundaries of their life to strive for a better world.

We’ll find our way to that shining place. I’ve always believed it, because I’ve seen how even our darkest hours can give birth to miracles.