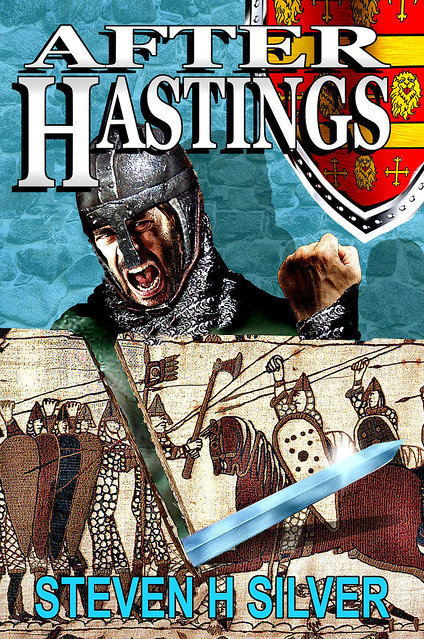 Steven H. Silver knows just a bit about alternate histories: He created a well-respected genre award for stories in that subgenre. Now he’s trying his hand at writing an alternate history: After Hastings. Where does his history take a fictional turn, and why? He’s here to tell you.

While in grad school, one of the things my professors constantly warned against during discussions was falling into the trap of counterfactual speculation. When discussing and debating the causes and events of the medieval period, we were to confine ourselves to theories that could be supported by the primary sources and archaeological evidence. The fact that I did not become an historian and founded the Sidewise Award for Alternate History may give some indication of how well I adhered to those rules.

At the time I began writing After Hastings, I expected to have a career in academia, specifically teaching medieval history and studying the formation of universities in Western Europe. I was in grad school, and, as you might imagine I was reading a lot. Do you want to know about windmills in twelfth century England? I didn’t think so, but if you did, I could talk to you about it. What about husband and wife living together as brother and sister for religious purposes? We could have long conversations about that.

In between all that reading, I decided it was time to start writing, and so, much to my wife’s chagrin, when I wasn’t reading about history, I scratched the counterfactual itch and used what I was learning to begin writing an alternate history in which William lost at the Battle of Hastings. And no, there are no windmills in the book.

The big idea of After Hastings is to look at the human repercussions of an Anglo-Saxon victory that sent William back to Normandy, alive, but defeated.

Although the point of divergence in After Hastings takes place during a battle, the focus of the novel is not on warfare or military excursions, although there are some battles in the book. William’s successful conquest invasion in October of 1066 permanently cemented England’s place as part of Western Europe, culturally, economically, and politically, instead of being part of Scandinavia, the lands from which William’s own ancestors had come two centuries earlier.

Once I had postulated William’s defeat in battle, I was able to more fully explore the human reactions to Harold’s ability to hold the crown. As with fiction, the interesting parts of history are human interactions. Too many schools teach history as a succession of dates without looking at the individuals who lived through the times, each trying to survive and build the best future they can. That is why musicals like 1776 or Hamilton are so popular. They focus on the flawed individuals who were building the world they hoped to pass down to their children.

Most likely writing in the tenth century, the anonymous author of the Vita S. Neoti told the story of the Wessex king Alfred, who reigned from 871 to 886, immediately after Saint Neot’s death and helped slow the Danish invasions of England that reached their peak in the early eleventh century when a dynasty of four Danish kings ruled England. This unknown monk related the legend that when Alfred was at his most despondent, living in a peasant’s hut on the island of Athelney, that the king was left in charge of some cakes that the peasants were baking. Lost in thought as he tried to formulate a strategy against the Danes, Alfred allowed the cakes to burn. When he tried to offer the peasant excuses, she waved him off, explaining it didn’t matter to most people who ruled them, but burning the cakes meant they wouldn’t eat that day.

In some ways, After Hastings is a response to that probably legendary peasant, although her point is an important one. Although it may be that who the ruler is may not matter to most people in their everyday lives, sometimes it intrudes in unpleasant ways. Historically, we know that William changed English society from the ground up as he replaced the Anglo-Saxon laws and nobility with Norman French versions. In the novel, Harold, responding to spiteful forces on the continent makes decisions with impacts as far reaching for all levels of Anglo-Saxon society.

Most of the characters in After Hastings are aware they are living at a pivotal time in history. Some of them are concerned about their legacy. How will they be remembered by future generations? Others are simply worried about whether they can continue to live the life they’ve been leading or if the upheaval caused by the whims of rulers, but domestic and foreign, but all distant, will make their lives untenable.

Although the driving force of After Hastings may be the religious changes Harold announces, the focus of the novel is the way it impacts individuals, from Sweafred, the priest from the small village of Heorlafestoun to Pope Alexander II. The waves sent out by Harold’s actions impact Sicilian vintner Vittorio Caltanissetta and the Castilian warrior Rodrigo Diaz, even if they haven’t heard of the events in England.

Momentous events can be caused by distant and seemingly inconsequential actions: the butterfly effect. A monarch deciding to promise something that isn’t his to offer or an outbreak of a new virus in a distant land can all have an unexpected impact on people of any status anywhere in the world.

After Hastings: Amazon|Ring of Fire Press

Read an excerpt. Visit the book’s site. Hear the author read from the book. Visit him on Facebook.