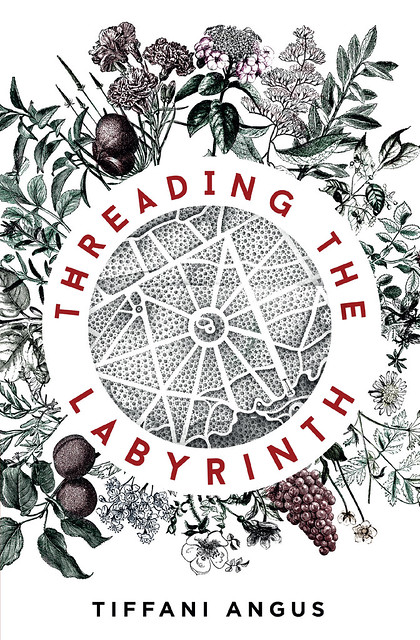 Time travel — and horticulture? The two entwine in Threading the Labyrinth, the new novel from Tiffani Angus. How did the author cultivate these two into a single novel? The answer awaits you below.

The big idea behind Threading the Labyrinth started in a garden. Well, it started with a garden. Okay, to be honest, with the idea of one. One with ghosts.

We humans have a long, intricate relationship with gardens, not just as physical places but as ideas and symbols: from the Garden of Eden to Mary as a hortus conclusus to sacred gardens in Buddhism and even Greek and Egyptian mythology (plus many more). To separate the physical from the spiritual is difficult because from the beginning agriculture was about controlling nature, and gardens are the apex of that idea. But gardens aren’t static: they grow and change. Ideas are the same: you start with a glimmer of an idea, poke at it a bit, and it morphs into something more complex and complicated than you anticipated. And then what? Well, then you think about it for a while and wait for what you planted to start growing into something recognizable. That’s how Threading the Labyrinth started: it was a faint idea that became a physical thing via a long study of gardens as representative of human civilisation’s connection to nature and time. Yeah, I know that sounds academic and a bit smarty-pants, but bear with me a moment.

A decade ago, I decided I wanted to do a PhD in Creative Writing. I’d been playing with this idea of writing a book about a house and its changes through the centuries as the family changed through the generations. But houses aren’t torn down and rebuilt the same as gardens are. People build new gardens atop old ones, yet all the previous incarnations of the garden are still there, just buried. That seed of an idea bloomed into a project proposal for a historical-fantasy novel plus an analysis of gardens in fantasy fiction that I used to apply to a university in England, where I could visit the gardens that inspired my idea. This was a huge dream for a person who grew up in the American Southwest without a garden; those green, lush gardens in the English gardening magazines were as fantastic to me as any secondary world in SFF. I soon learned that there was so much more there than just a bunch of flower beds and fountains: there was more history there than I expected.

Doing a PhD in Creative Writing is a journey of its own and I won’t get into details here, but Threading the Labyrinth was one of the outcomes (the other was a 40,000-word critical commentary of the novel as well as of space and time in gardens in fantasy fiction). When you research over 400 years of English gardening history, you begin to realise just how strongly entwined gardens are with national identity, politics, social mores, and ideas of art and perfection. It’s difficult to think about a garden without thinking about time. And that’s where Threading the Labyrinth as a story comes in.

There’s a tradition in children’s fantasy fiction of gardens as time-travel devices: Tom’s Midnight Garden, The Children of Green Knowe, Moondial, The Time Garden, The Ghosts, and Lavender-Green Magic, among others. In these gardens, the kid characters either purposely or accidentally travel through time, meet people who lived in the house/garden in the past, learn about history by encountering historically significant people, or even try to change history. When adult books feature gardens—rarely in SFF—the garden is a place for betrayal, adultery, and even murder. As I wrote Threading, which has a frame story in 2010 and contains stories about (mainly) the women who work in the garden in the 1620s, 1770s, 1860s and 1940s, I realised that what I was doing was using the time-travel-in-a-garden trope but for adults who have a different relationship with time and space—and with gardens—than kids do. Threading isn’t told in a traditional chronological order; as the protagonist of the 2010 frame discovers things about the garden and house she’s inherited, the narrative jumps back in time to one of the other stories to focus on how a weeding woman, a head gardener’s daughter, a Land Girl, and a man with a mysterious link to the garden (and questionable parentage) all relate to this specific place and begin to understand their place in history.

A garden is a garden because it’s controlled within physical borders, and timeslips are part of how the garden in Threading reaches out to the characters and transgresses its chronological borders. The garden wants someone to tend it, to keep it as a garden and save it from destruction and becoming wilderness. Sometimes this desire manifests in a riot of the senses, seducing the characters. Other times it’s voices, images, and even the ghosts of the past—and the future. Because if a garden is all of the gardens that have ever been there, layered atop one another, then it makes sense that in Threading the future gardens are there, too.

Humans are like gardens: we want to be tended, to be cared for, guided, developed. Sometimes this urge comes out softly and inquisitively, sometimes with violence because we don’t know how to express our needs. Maybe this is why as humans we react so strongly to being out in nature, whether controlled or wild. There is something there that we relate to. We are seeds, slowly developing and wanting to grow and be seen. We want to make a mark and be part of history.

The novel was originally scheduled to come out in April, but 2020 has been one big gotcha after another; the pandemic affected publishing, upsetting printing schedules and making getting physical books in the mail more difficult because after lockdown they initially weren’t considered essential. As a result, my publisher released the ebook on the original date but pushed the paperback to July, and all of the in-person book-related events were cancelled. Yeah, that’s a small disappointment in the scheme of the world, but it draws attention to something that’s simmered beneath the surface of our society these past few months: the need for purpose, for some reassurance that there will be a future that we are “okay with” even if it’s different from what we had before; the need for us to find our place in time and history. The delay in the publishing date has meant that the original big idea behind Threading the Labyrinth has become more complex than I initially understood it; as people have read the ebook and shared their thoughts, I’ve come to realise that what was originally about gardens and time has morphed and become, during a pandemic in which people have yearned for the outdoors and some semblance of normality, a bit about hope and the future.

To thread a labyrinth is to walk its twists and turns to the center and then work our way back out. Threading the Labyrinth is just that: it is a threading together of history that the reader must navigate to see the connections between family members across the generations and between people who are linked via the place where they have lived and worked. It’s about how we make our mark and live on, as ideas and historical records and even ghosts, into the future. Something that, in 2020, we all need to feel.

← Grant Imahara, RIP
I Had Substantial Dental Work Done Today and the Anesthetic is Wearing Off, Making Actual Thinking Difficult, So, Here is a Picture of Smudge Seriously Considering Trying to Abscond With an Entire Steak →