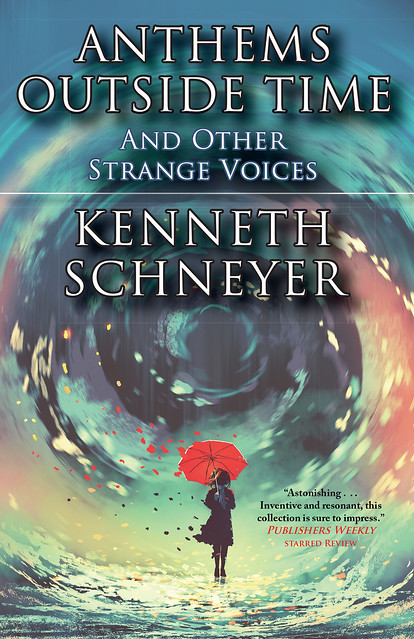 As he begins his Big Idea for his collection Anthems Outside Time and Other Strange Voices, author Kenneth Schneyer will ask you to think of a certain sort of writing perhaps differently than you do now. Don’t worry, he explains himself as he goes along.

A story is not an action by a writer; it is an interaction between a writer and a reader. The writer is not even in the room when it happens. The writer supplies the components and structure, but it is the reader who assembles those components into the story, piece-by-piece, dimension by dimension, in real time as she reads.

I once had a heated argument-by-mail with the book critic for a major magazine who trashed a novel I had read and loved. I pointed out the novel’s symbols, its themes, its overarching metaphors, the character pathos, the painful political skepticism, aghast that he could have overlooked them. He replied, “We appear to have read two different books. You seem to have read a serious work of fiction; I read a cheap thriller.” Two different books. Indeed. Inevitably.

In my day job as a teacher and scholar of law, I have written about what James Boyd White calls “constitutive rhetoric:” the relationship, the political universe, established between reader, writer (and/or narrator), and character. The language of every text expects, even demands, certain things of its readers, assuming that they will treat the author, and the people in the text, in particular ways and not others. The text impliedly claims that its author is a certain kind of person—knowledgeable, perhaps, or sympathetic, or strategic, or brave—and also assumes that the reader is a particular type of person, sometimes refusing to contemplate that they might be anybody else. Some texts do this so well that the reader accepts these imposed roles without knowing it. Within this relationship—this constitution, if you will—certain things are impossible to say, while others are so axiomatic that they do not need saying. Power is allocated. Permission is granted. The reader is complicit. (For those who are curious, two of my articles on this subject are here and here.)

Writers, I think, mostly know this, at least unconsciously, but readers are often unaware of their role in the assembly of a tale, thinking that the author has presented them with something finished that they are passively receiving; some fiction encourages them to think this way. I have always felt that it is important, even urgent, that they know and feel their position, that they understand their own responsibility and culpability for the world we jointly create. I want to draw their attention to it.

This is why I am attracted to strange voices.

In a lot of my stories, the “ordinary” assumptions of narrative are upended, inverted, or defenestrated. The narrator in “Some Pebbles in the Palm”, the first story in my collection Anthems Outside Time and Other Strange Voices, repeatedly reminds the reader that they are being manipulated by the story, insisting that they see it as a deliberate work of composition rather than just things happening, that they understand that they have a choice as to whether to accept the manipulation, and to consider what it means if they do.

Other stories in the collection have narrators who don’t understand that they are narrators (“I Have Read the Terms of Use”); narrators who think they are telling a different story than the one I wrote (“Who Embodied What We Are”); narrators who miss the whole point (“Selected Program Notes from the Retrospective Exhibition of Theresa Rosenberg Latimer”); narrators who are the collective voice of an entire community (“The Last Bombardment”). There are stories made entirely of documents (“Tenure Track”); stories where you have to hunt even to find the protagonist (“Levels of Observation”); stories made of fragments where no overt connection is made (“Lineage”); stories told by a dissonant chorus of voices who don’t agree on what the story is (“A Lack of Congenial Solutions”).

In each of these stories, the reader cannot ignore their agency, cannot imagine themselves a passive recipient, because they have to decide how to react to this unexpected way of speaking. They must circumvent and sometimes actively oppose the tyranny of the narrator. They (hopefully) bang their fists on the margins of the page, shouting at the narrator, “No, that’s not what happened! That’s not what it meant!”

Oh, I have more familiar voices too—third-person past tense limited (“The Plausibility of Dragons”), first-person past tense with lots of brooding internal monologue (“Serkers and Sleep”, “Keeping Tabs”), third-person present tense with rotating POV (“Keepsakes”), first-person alternating between past and present tense (“Hear the Enemy, My Daughter”). But what I never assume is that there is a “default” voice, that third-person past-tense limited means that the reader doesn’t have to think about why the voice is the way it is. Every voice is strange, every voice has implications, every voice makes a different claim on the reader.

All voices are strange if you listen to them.

← Twitter is Being Hacked and I Can’t Post to My Verified Account at the Moment Because I’m Being Told It Looks Like Suspicious Activity, I Bet I’m Not the Only One
Five Things: July 16, 2020 →