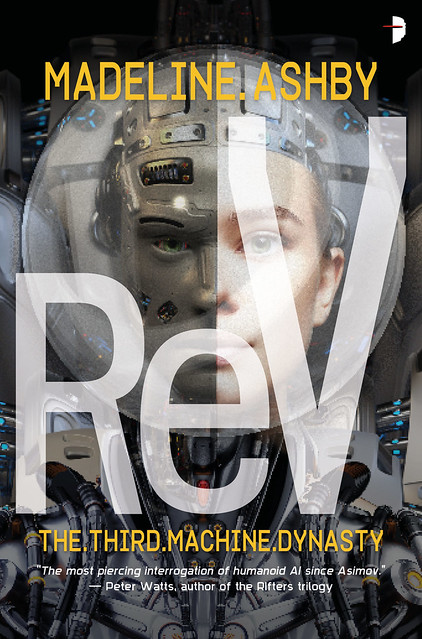 In today’s Big Idea, Madeline Ashby is talking about monsters, what they might mean to each of us, and what hers in particular meant to her latest novel, ReV.

“It’s a rape revenge story? Is that what you said?”

It was October of 2016. It was a rainy morning in London just days from Halloween, and I was mind-shatteringly jetlagged, getting ready to give a talk at MozFest, the festival put on each year by the Mozilla Foundation. I was answering questions put to me by a fact-checker from the Wall Street Journal, after Margaret Atwood said they should talk to me about robots, science fiction, and the future. The interviewer had asked about my series of novels called The Machine Dynasty, which started with a little book called vN. This was how Margaret and I met — we did an appearance together with Corey Redekop at the Kingston WritersFest back home in Canada. She had gently steered the interview in the way only she can, and said, “Now, Madeline, having read your book, I must ask: how old were you when you first saw The Wizard of Oz?”

Oh, I thought. She gets it. Of course she does. She’s Margaret Fucking Atwood.

This was my life in 2016. In a week or two, the world would fall apart. So would I. In both cases, it happened slowly, but faster than you might think. In both cases, it started years earlier. Collapse is not a binary state; damage occurs on a spectrum of possible repair. You might not recognize it, at first. You may not yet have the words with which to describe it.

When I’m asked why the final book of the Machine Dynasty series, ReV, took so long for me to write, I have a variety of answers. I say that I was distracted, because I was. I had another novel enter a national reading competition in 2017, and I did foresight work in Dubai, Amsterdam, London, Palo Alto, and elsewere. I taught my students in the Digital Futures programme at OCADU in Toronto. I wrote short stories for XPRIZE and the Robert Wood Johnson Foundation and the World Bank. I spoke at SXSW, Design in Action, MozFest, SweCon, the White House Office of Science and Technology Policy. I wrote two short films, directing one of them. I worked in my first writers’ room and helped continue the story of Orphan Black. This is true, but it’s not the whole truth.

Other times I say the book wasn’t right, because it wasn’t. The book has had multiple drafts and at least four different endings. Each time I finished it I knew it was wrong; I felt the wrongness of it the way one might feel two misaligned joints grinding against each other. It’s invisible on the surface, but it makes every step painful. This is true, but it’s not the whole truth.

ReV: The Third Machine Dynasty arrived late because I was very sick.

I was lucky and privileged enough to still able to work. I still flew and taught and keynoted and facilitated. I still wrote short stories. But Portia’s story loomed, and so did my shame at being unable to finish this one damn thing. I dragged myself to weekly morning writing sessions with other writers for months: It’s bad. It’s broken. I don’t think it can be fixed. What I did not say was that I was talking about myself. But they knew, and they disagreed, and each in their own way said that I could slay the beast if I stopped running and faced her. If I opened the book. If I looked inside.

For the Machine Dynasty novels, I made one hard and fast rule: Amy would always be morally right but practically wrong, while Portia would always be morally wrong but practically right. Amy prioritizes her ideals; Portia prioritizes her continued existence. Amy is the smile; Portia is the teeth. Amy believes that life with humans is possible; Portia knows it isn’t. It’s Portia who cautions Amy when she is too trusting; it’s Portia who frees them from cages. Over the course of the novels, Amy learns that her grandmother, another version of herself, functions best as a defense mechanism. She can be partitioned off, but she can also be unleashed when necessary. Just as Dorothy cannot see Oz without the Wicked Witch, Amy can’t go on her own journey without Portia.

In the eleventh century, a Tibetan Buddhist nun called Machig Labdrön developed a concept she called “Chöd,” or The Beggar’s Offering. It’s what you give when you have nothing left. And in order to give fully, you must also yield up the worst parts of yourself. Doing this means identifying them and making peace with them. You have to feed the monster. You have to ask, as Marcus Aurelius did: “What is this, in itself? What is its nature?”

What does your monster do for you?

I am writing to you from my socially distanced home office in Toronto. The plague commonly referred to as COVID-19 has ravaged the planet for the past seven months. There is disagreement on the timeline — coroners in California claim they had victims as early as Christmas of 2019. As of this writing, the global death toll is 573,000. In Canada, the number is 8,796. The borders are closed. The world is smaller, dimmer, meaner. And everywhere online, I see other writers struggling with the things I could not describe for years: the doomscrolling, the dissociation, the helpless gnawing horror and despair, the inability to work, the inability to think, the encroaching desert where the creative wellspring used to be.

I am here on the other side of the desert, to tell you that the monster might be here to protect you. She is doing it badly, but trying her best. She is the Red Bull driving you into the sea, unaware that you might drown, trying to hide you from the world’s mundane terrors under the rolling weight of cold salt tears. She is the witch filling a field with poppies just for you, because she knows that the man behind the curtain will always disappoint. She’s the wicked queen locking you in a room at the top of the tallest tower, where you can’t be hurt if you don’t try, where you can’t fail if you never act.