What? A Five Things on the weekend? Sure! I’m not usually going to do them on the weekend, but today I feel like doing one, so here we are. And here’s what I’m thinking about today:

Biden’s path to victory: Do nothing — The article linked to here does a rundown on Biden’s largely low-key presidential strategy, which can basically be summed up as, “Be a moderate Democrat; don’t interrupt Trump while he’s imploding.” Which, you know what? I’m totally for! And seems to be working in any event. Biden fans, such as they are, will point out he’s been putting out a raft of proposed policy initiatives, some of which are surprisingly progressive, and they aren’t wrong. It’s just that literally no one cares, because at the moment the president is ditching doing anything about the pandemic in order to stuff secret police into rented unmarked vans in Portland. Biden could prance about naked in his basement with sparklers wedged between his buttcheeks and people would still be, rightly, more concerned about what Trump is doing, and not doing. I don’t think there’s ever been an election, certainly in my lifetime, where the argument of “I’m not that dude” has ever been more compelling.

Will a Trump wipeout change the GOP? The article here suggests maybe, but I’m not in the slightest bit convinced. I’ve been watching the GOP since the Gingrich days, folks, and the thing about the GOP is that there’s never been a time when it’s been defeated that its response has been “Oh, wow, maybe we should change tactics.” No, it’s always — always — doubled down, which is why it is what it is today: The party of white supremacists and emergent fascists, led by incurious bigot who has contempt for the same “law and order” he pretends he is rallying for. The GOP is the party which, at every point when the choice was doing to the moral and responsible thing, especially in the last four years, said, “okay, but what if we… didn’t?” and went from there. Their only real problem at this point is, having arrived at naked white supremacist authoritarianism as they have, the question of where they double down from here is not one with a pleasant answer. I’d be happy to be wrong! I don’t think I am.

(This brings me little joy; I remember having two functional major political parties. It was better than what we have now. White supremacy is a hell of a drug, y’all.)

Looking for NEOWISE: I got a picture of the comet on Friday night, I’m happy to say:

It’s not a great picture — I took it with my Pixel 4 — but the impressive thing was that I was able to take it at all. For the last several days our skies have been cloudy, which made comet hunting difficult-to-impossible; Friday was literally the only day in a week where we had a mostly cloudless sky. I’m hoping for another one before the comet fades out of sign entirely, hopefully to get a slightly better picture. But no matter what, I got to see this year’s comet with my own eyes, and so did Krissy. That’s pretty cool. 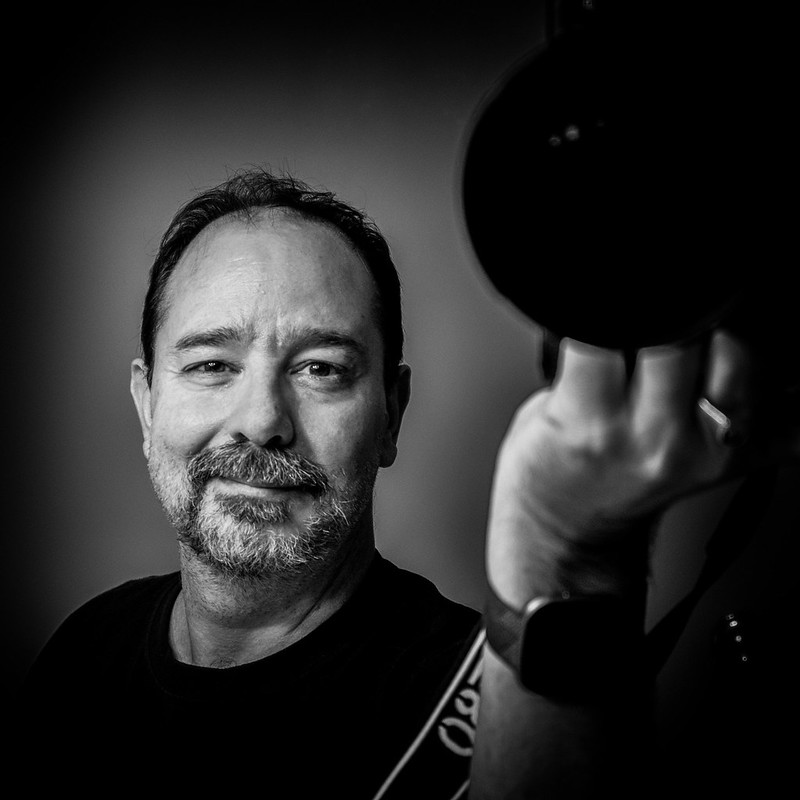 Photoshop updated its RAW photo editor recently, so I spent yesterday fiddling about with it, on the grounds that in fact it would be nice to actually use more of the program to make my pictures better (or at least, more interesting to me). This occasioned me taking a few selfies with my Nikon in order to play with them in Photoshop; this was the best one. I could use a shave. Otherwise I’m happy with it. Generally I’m happy with 51-year-old me, in a photographic sense. I think I could look a lot worse.

And now, “Joey”: As part of our quarantine hobbies, Krissy and I are learning this song on guitar, because it’s one of Krissy’s favorite songs from one of her favorite bands, and also, it’s four chords, none of which are terribly difficult (G, Em, C and D, if you were curious). We practice it a bit most days. We’re not completely terrible! But, not as good as the original. Here’s the original.

← Saturday Hibiscus Photos
I Don’t Know What You Were Doing With Your Day, But Personally I Was Watching a Whole Bunch of Videos About Submarines →