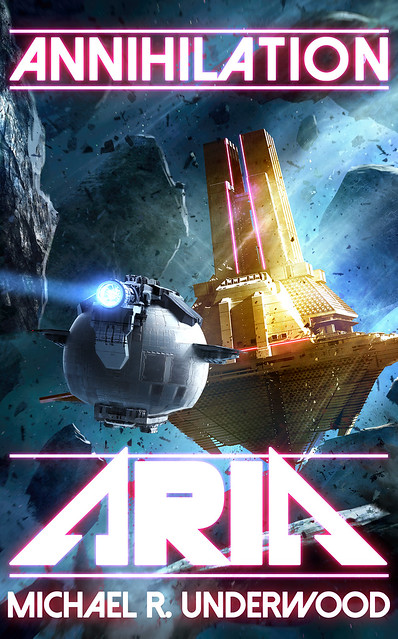 For his Big Idea for Annihilation Aria, author Michael R. Underwood is examining the part of the story that usually gets skipped over — unfairly so, in Underwood’s opinion.

A famous phrase that signals the end of many stories, from faerie tales to action movies to romance novels. Growing up, so many of the tv, film, comics, books, and more that I experienced said – implicitly, if not explicitly – that once a couple overcame whatever big trial happened in act three, the relationship itself was smooth sailing.

And depending on how you read those stories, it says something worse. It says that long-term, committed relationships are boring, or that they’re only interesting when they’re falling apart. “Happily Ever After” doesn’t prepare anyone for the lived reality of making a long-term relationship work. Sometimes the best romance works will illustrate those challenges and joys on the way, because romance writers are grand masters of characterization. But getting into my first romantic relationships, I had few fictional models for what it was like to negotiate the higher-level challenges and opportunities posed by a committed partnership. And being a storyteller by trade, that lack of narrative models became especially frustrating.

With Annihilation Aria, I set out to add to the count of works that unpack “Happily Ever After” and show that a committed couple can be exciting protagonists as well. I had some guidance, some signpost works that I could draw upon, from Evie and Rick in The Mummy Returns or Zoe and Wash in Firefly to more recent examples like Elma York and her husband Nathaniel in Mary Robinette Kowal’s Lady Astronaut series. I don’t pretend to be solving this problem single-handedly, but I wanted to push in the right direction.

By the time I started writing Annihilation Aria, I’d married the love of my life and was gaining personal experience about marriage. Speaking for myself, the relationship got more interesting and fulfilling after many films would have rolled credits. For me, being married was less a massive sea change and more the next step in an existing dynamic. The relationship was a dynamic thing with moving parts, built with care and love over time through compassion, honesty, and determination.

Compassion, honesty, and determination – excellent qualities for heroes of an adventure story.

So rather than Annihilation Aria presenting the meet-cute of protagonists Max and Lahra over the course of the adventure, we join them years into their marriage, well into the territory usually labeled “Happily Ever After.”

From page one, they’re a well-oiled team – Max the cheery scholar, Lahra the stoic warrior. It was a delight to write characters that knew themselves and one another – where I could characterize one person in how they interpreted and thought about the other, drawing on years of experience, familiarity, and affection.

Since Max and Lahra are an established couple, I got to skip the regular beats of circling and flirtation that often fill out a romantic arc in an adventure story. Instead of one person being a prize to be won, I focused on the ways that each of them is invested in the goals of the other: Lahra’s inherited quest for the lost heir to her people’s empty throne and Max’s search for a way back to Earth.

The depth of their affection is on display as they delve into ruined space temples, searching for treasures to fence in order to keep their ship fueled and themselves fed. They work as an effective team, because they know each other’s strengths and weaknesses, allowing me to go deeper with their emotional investment in one another.

An established couple can up the stakes. The characters’ investment in one another and the depth of that relationship is fertile ground for enriching the reader’s own investment. Watching your romantic interest get captured by an evil empire packs a bigger punch when they’re your spouse of several years rather than a captivating stranger you’ve only known for a few days. When two people have folded one another into their everyday lives, have learned to place their spouse at the top of their priorities list, that sudden absence hits like a pile of bricks.

Many storytellers in the Western tradition have been trained to believe that “Will They, Won’t They” is the gold standard, and that betrayal, loss, and breakups are the way to keep a character’s love life interesting. But there’s just as not if not more to be plumbed from a long-term relationship, be it the strong friendships or family relationships seen from Lord of the Rings to Supernatural. A committed relationship can gain just as much from that approach, and it’s one that more matches the set of experiences readers will bring to the story. Or it might provide the kind of hopeful narrative modeling that young readers look for in imagining what it might be like to find love and build a life together.

I’m happy to say that Annihilation Aria defies the standard wisdom of “No lasting romances” and works to normalize committed romantic relationships in stories. But maybe most importantly, I’m glad to know that I’ve written the kind of book I wished I’d found more often as a younger person – one where “Happily Ever After” is just the beginning and marriage itself is an adventure.

← I Don’t Know What You Were Doing With Your Day, But Personally I Was Watching a Whole Bunch of Videos About Submarines
Mary Robinette Kowal and I Talk About Books and Science Fiction and Stuff →