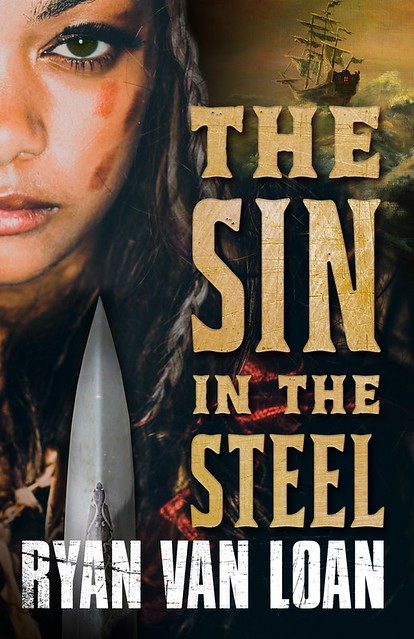 For Ryan Van Loan, unexpected voices led him to take an equally unexpected journey — one that would result in his new novel, Sin in the Steel.

My Big Idea started with a literal whisper in the dark.

“Let a man think you weak, let him think you vulnerable, and he’ll never see the blade until it’s planted in his ribs,” a young woman whispered, ripping me from my half-asleep stupor to wide awake in the blink of an eye. It was an early summer morning and the voice made me sit straight up.

Disoriented, I looked around but there was no young woman next to me in bed except for my wife and she was still dead asleep. The voice was in my head and before you start wondering if I needed to seek psychiatric help, I should preface this with an important caveat: I’m a writer. We live with voices in our heads all the time, welcome them in fact.

That sentence set me on an adventure of discovery as I began writing the story of a young woman, Sambuciña “Buc” Alhurra, a 17-year old autodidact rogue raised on the streets that would eventually become The Sin in the Steel. I needed to understand what would make someone so young have such a Machiavellian view on the world, and to do that I needed to dig into two things: Buc’s backstory, and more importantly (for good stories anyway), what she wanted.

But it turned out those weren’t quite my Big Idea.

Buc lives in a world dominated by trading companies that pull the strings on empires, where mages walk the streets and pirates sail the seas, while undead gods fight a religious forever war with the world as their chessboard. Growing up on streets in the age of Mercantilism and Sail told me what made her, but increasingly I was interested in what she wanted, and how she intended to achieve it. What were the stakes?

Over months, she told me: she wanted to break the cycle that had created her, to give the poor and young the chance she never had. Buc knew, none better, that to do that requires power and so she set out to find a big enough lever to tip the scales weighed against her. A lever say, like the most powerful trading company in the world. Damn, that was big and it was closer, but it still wasn’t My Big Idea.

That’s where The Sin in the Steel starts: a lever. Both streetwise and booksmart, Buc built a reputation as the first private investigator in her world and with her war-weary Watson-esque partner in crime-solving, Eld, she gets that chance when the world’s most powerful trading company blackmails her into solving an unsolvable mystery: why their ships are disappearing in the far flung reaches of the world. Buc, being Buc, manages to turn the tables on them and if she can solve the mystery, she gets a seat at the table…finally the power she needs to break the cycle of power she grew up in.

Now I knew what Buc wanted, but even more interesting to me was what she was willing to sacrifice to get it. And that, ultimately was my Big Idea: what are we willing to do for power? What will we sacrifice?

I’ve never believed that we are, any of us, an island. I don’t think you can be successful in life by yourself. At some point, we all need someone, whether we realize it or not. Someone to open a door, someone who believes in us, someone who supports us when we can’t stand on our own. There’s a reason why humanity exists in society and not as individuals, each of us a society unto ourselves.

Still, there are those rare folks who seem to dominate the world by sheer will and Buc has the potential to be that type of rarity. Coming from the streets, she never really had anything to lose and she liked that. In the book, Buc talks about how need is a noose we slip around our throats, waiting for the world to pull it tight and she’s made sure to never need anything. Or anyone.

I wanted to test that notion, to test Buc’s resolve and really, that’s what The Sin in the Steel is about: one young woman’s journey to get the power she needs to change her world. Along the way everything she’s ever believed in, everyone she’s ever known will be put to the test, trod out to walk the plank. The question, Dear Reader, is Buc truly an island? Will she watch them all drown to achieve her goal or will at the end of it all, even our Machiavellian street rat need someone more?