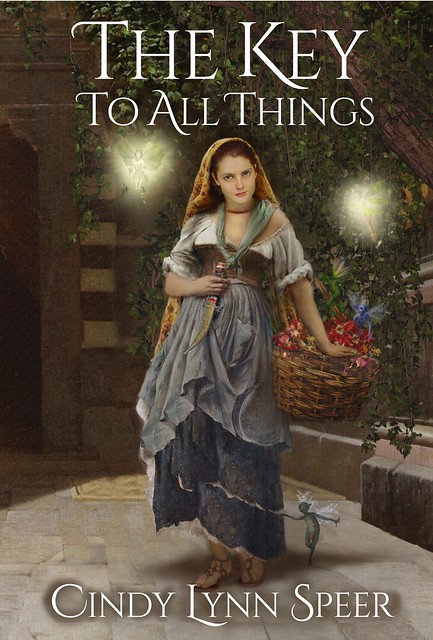 So, what is The Key to All Things? Aside from the title of the new novel by Cindy Lynn Speer? The good news is, we have Speer here to tell you what it might be, and how it relates to her tale.

I came through the central driving idea for The Key to All Things in a rather circular way. I was watching Lady Hawke, and thinking about all these great love stories that seem to be so resonant. These glorious adventures and (spoiler, sorry) Happily Ever Afters.

And then I thought, what happens if the happily ever after turns false? So the original story was about a man who was once part of a Great Love Story – until she betrayed him. He needed to go and get something (A sword?  I don’t remember?) and set off on a quest. The second main character was a younger woman who had grown up hearing this story, and felt like this story set the bar for all her expectations for love and romance. It would have been a story about redemption (which the current one still is, to be honest) and love.

I liked the idea – I always like the “that’s very nice but what if…” kind of ideas, but I wasn’t sure what I was trying to say. If I even liked what I was saying. A couple times I tried to resurrect it…but I never really was sure if it was working so I let my people sleep.

And then, a snow storm happened. Which meant I was able to sleep in, and the story came back to me. I was well rested, in a great mood, and all of a sudden things came together in an almost audible click. I knew where the story was supposed to go and how to get there. New characters took the field, though they were the same basic shapes. Edward DeVere, the handsome captain of the human King’s guards still loved the wrong woman – Catherine of the Willows, who threw him aside to grab power and become the Queen of the Fae. He still fell – and his story was still loved. So loved, in fact, that variations of their forbidden love (human and fae aren’t supposed to be together) became a powerful tale. So powerful that it pushed out every other story. No more songs, unless they were about Edward and Catherine. No more poems or pulp novels or anything save about…yes. The Sapphire Queen and her lost human love.

And then, there is Avriel. The woman – about Edward’s age, this time – half human, half fae, working as a double agent in both courts. During the day the story itches at her, makes her sad, and she pushes it off, not understanding why – and then nine o’clock at night chimes, and for three hours, she knows the truth.

Edward was not Catherine’s lost love – in fact, he rather detested her. Edward DeVere was actually Avriel’s husband. Avriel, under a new name, was relegated to the back pages of the cheapest versions of the story. Avriel, a woman who is more powerful than she knows and who is determined to fix the world and get her life back.

But is one woman as powerful as a story?

And that was what I realized I wanted to talk about. The power of story itself. Also a love story with mystery, intrigue and some sword fighting scenes. Avriel and Edward both have to fight the narrative to get what they want, which is something I think we all do in our lives. We fight the story we tell ourselves about not being good enough, about – whatever. Even now we are fighting stories, fighting narratives that have been whispered and taught to us all our lives.

Because stories are power.  They are, indeed, the key to all things.