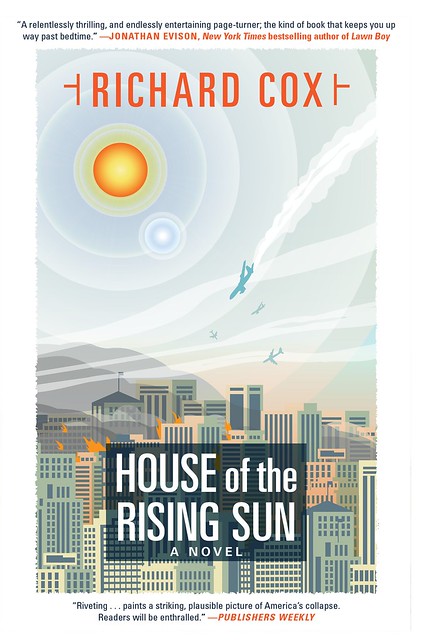 Good things come to those who wait… and learn. That might be the theme of this Big Idea by Richard Cox, for his novel House of the Rising Sun, which experienced a pause in its writing and in doing so just may have arrived at precisely the right time.

Before I started work on House of the Rising Sun, I didn’t know such a thing as prepping existed. I didn’t know there was a whole culture of people expecting the world to end at any time, who were storing food and water and supplies in advance of this impending fall of civilization. All I wanted was to write an epic novel about an apocalypse that didn’t immediately kill all the people or blow everything to smithereens or feature zombies or a virus. I didn’t imagine I would publish two other novels before this one or that when the book finally hit the shelves it would be during the throes of an actual pandemic. I didn’t know how strange and transactional it would feel to promote a project that captured so much of the reality we currently face, and when I say reality, I don’t just mean COVID-19.

My desire to write a post-apocalyptic novel dates to when I was 16 and read The Stand, and toward the end of 2010 I decided to get serious about it. I hopped on Google looking for a real-life cause for the type of apocalypse I wanted, and lo and behold there existed such a thing! By now I think many people understand what an electromagnetic pulse (EMP) is, but ten years ago the threat was less well-known, and certainly I had never heard of it. The idea of that all our computer chips and transistors could be fried by a pulse fascinated me.

Think of the mayhem it would cause. Cars wouldn’t run. The power grid would collapse. No phones, no television, no Internet, no anything. Such an event would send a developed nation back to the age of horses and buggies and kerosene lamps, only worse, because back then horses and kerosene lamps were commonplace. Before the 20th century most people didn’t rely on water pumped into cities from distant artificial reservoirs. They lived somewhat near their sources of food instead of depending on daily shipments from hundreds or thousands of miles away.

And even though I wanted the novel to be set in the continental United States, it didn’t seem interesting for the EMP to be local. I wanted it to be global. I wanted there to be no easy chance for rescue for anyone by anyone. That meant the EMP would need to be caused by a celestial event, and since I’d always wanted to title a novel House of the Rising Sun (I’m keen on The Animals’ version) I chose a supernova as the culprit.

So I wrote a few pages and thought I had a solid concept, but there was still the matter of these two other projects on my plate. Eventually I set the new idea aside and published Thomas World in 2011. After that there was a decision to make: keep going on House or pick up the pieces of this other project that had been brewing for years, The Boys of Summer. I was pretty much on the fence until I saw, with some dismay, that someone had beaten me to the EMP story. A novel had been published in late 2009 that was similar enough in concept to mine that I decided not to proceed…at least not yet. I wanted to read and understand that book so I didn’t write the same story again, and because I didn’t want to follow it too closely for looking like I had stolen the author’s idea.

I’m so glad I waited.

What happened was, on the heels of that 2009 EMP novel, many, many others followed. In part, I suspect, because the novel sold well, but also because the prepping community began to behave as though civilizational collapse was imminent. I can’t say for sure if they really believed such a thing, or if certain authors decided to capitalize on cultural anxiety, but it doesn’t seem like a coincidence that prepper fiction gained momentum soon after an historic election that saw a Black Democrat become President of the United States.

Even though I had no intention of writing about preppers, at least not directly, it still seemed like a good idea to become familiar with novels that covered similar ground. So I downloaded a few eBooks and quickly discovered most of these novels followed a template: 1) An EMP quietly kills all the things, 2) Most people have no idea what happened, 3) Preppers inherit the Earth. And yes, that leaves out a few steps, but honestly not that many. Because the point of most of these novels is not to push a character’s life out of balance and explore her attempts to restore equilibrium. It’s not to live in a character’s mind while he shelters in place and hides his supplies from neighbors and battles against grief and guilt.

No, the point of most prepper fiction is to tell you what to buy to protect yourself from Armageddon while also picking sides in an imagined culture war. Like you should order precisely this gun and exactly these water purification tablets and this particular mess kit. And, perhaps most importantly, how to defend yourself against (and by defend I mean kill) hungry city slickers when they realize the power isn’t coming back.

Eventually I came to understand that even though scores of EMP-centric novels had been published, there might still be room for another one. What if I told such a story from the layperson’s point of view? What if some or most of my characters weren’t prepared at all? What if these people hailed from various walks of life and held differing cultural or political views? What if the women in my novel were given agency in their lives instead of idly watching while the manly menfolk solved all the problems and killed all the evil city dwellers?

What if the desire to survive wasn’t taken as a given?

The more I researched, the more I noticed how many reviews critical of EMP novels were published by readers who were fascinated by the story concept but wanted to read a book where normal civilians were forced to navigate a world that became suddenly and dangerously quiet. They wanted to experience the thrills and pain and difficult choices that any character might face if an EMP really happened. And fortunately for me, that’s just the novel I wanted to write.

The irony of all this is that I composed the bulk of the first draft in 2016, while several candidates were careening toward the U.S. Presidential election, and in order to generate a dystopian mindset I pictured a certain candidate winning, even though I did not expect that candidate to win. I watched as that candidate incited anger and violence among his supporters, which absolutely influenced scenes in my novel. With time I came to realize the subtext of my story wasn’t as different as I had imagined from the others in the EMP space…I was just inspired by a different boogeyman.

And now my novel about the end of the world has just been published while the real world is buckling under the strain of an actual existential threat. Another Presidential election is just around the corner, and there is no end in sight to the COVID-19 pandemic, and I can’t help but imagine what sorts of apocalyptic stories are being written right this minute…and who the next boogeyman might be.