Oh, hello! How are you? I have a few things I’m thinking about today:

Hey, did you know? Our economy is shit! Specifically, the last economic quarter is absolutely the worst on record, either on its own (in which the GDP shrank more than nine percent) or on the especially dramatic “annualized” basis (which has the GDP shrinking an unfathomable 32%). Here’s an explainer about what “annualized basis” means, and why it’s probably not the one to look at for an actual accurate bead on the economy, but, look, no matter how you slice it, our economy is in a bad way.

“It’s the Trump economy!” Well, as much as I hate being fair to the awful bastard, let us stipulate that given the pandemic and the initial shutdown it precipitated, the economy would have taken a massive hit during this first phase of the coronavirus regardless of who was president. Trump and his administration’s policy of “welp, you’re on your own, guess you’re gonna die,” certainly didn’t help between April and June, of course. But it would have been a mess regardless. It’s all the rest of the year, and the subsequent economic mess that exists (and is coming) from the administration’s incoherent and incompetent response that will define the Trump Economy. And just before an election! That’s great news for him.

Trump wants to delay the election: Sure, he’s trying to distract from the horrifying economic report today (it won’t work), but also, he’s pretty sure he’s going to lose the election (he probably will) and if and when he does he’s going to spend the rest of his life in courtrooms and/or in jail (I can’t wait), so why not try to delay the election on the basis of the utterly spurious lie that voting by mail is fraudulent? This is an utterly foolproof plan with no flaws whatsoever!

The good news, such as it is, is Trump’s brilliant plan doesn’t seem to be getting much traction with other GOPers, who I have to assume have actually read the Constitution, or at least have had someone read it to them. Also, Congress would need to change the date; good luck getting that past the House at the moment. But this is just more evidence that Trump is planning to deny the validity of any election that doesn’t go his way, and the rest of the GOP will have to decide which they like more: The US Constitution, or, you know, actual fucking treason. I wish I could say that “actual fucking treason” had less than coin-flip odds at the moment.

Herman Cain dies of coronavirus: Which is sad, and also, I don’t think it’s politicizing his death to point out the odds are really excellent that he contracted the virus either at Trump’s Tulsa event or traveling to or from it. Cain’s people want to suggest there are other places where he could have picked up the virus, and of course they would do that. One does have to entertain the possibility that they may even be correct; Cain was extensively traveling during a pandemic and also eschewing things like mask wearing, which increased his chances of exposure. What we can say for sure is: stay home when you can, folks. Wear a mask when you can’t.

Meanwhile, back here at Whatever: Athena and I held our first staff meeting today, talking about short and long term plans for the site now that she’s coming on as staff — not just in terms of posts and features but a bunch of backend stuff too, like scheduling and where in the house she’ll do her work (home office, folks!). I suspect I bored her a bit with all the things I had on the agenda to discuss, which just means I am totally being a boss, I guess. In any event, a good meeting and a good start. I’m looking forward to next week. Just FYI, expect the Athena rollout to start relatively modestly as we get things going; we have a fair amount of backend stuff to contend with the first couple of weeks.

Spice with the catnip sock: We have a lot of catnip toys in the house, because the cats are all catnip-sensitive (not all cats are) and we enjoy watching them get stoned. But they are also super aggressive with the toys so they don’t last very long — someone sent us some catnip bananas and the cats had eviscerated it an hour later, and we had catnip all over the hardwood floors.

So what I end up doing is taking a whole bunch of catnip, putting it into an old sock, putting a knot in it to sequester the catnip, and tossing it to the cats. Voila: a durable catnip toy the kitties have yet to destroy. And after a couple of weeks, replace the catnip inside, and you’re back in business. I reloaded the sock the other day; here’s Spice enjoying it quite enthusiastically. 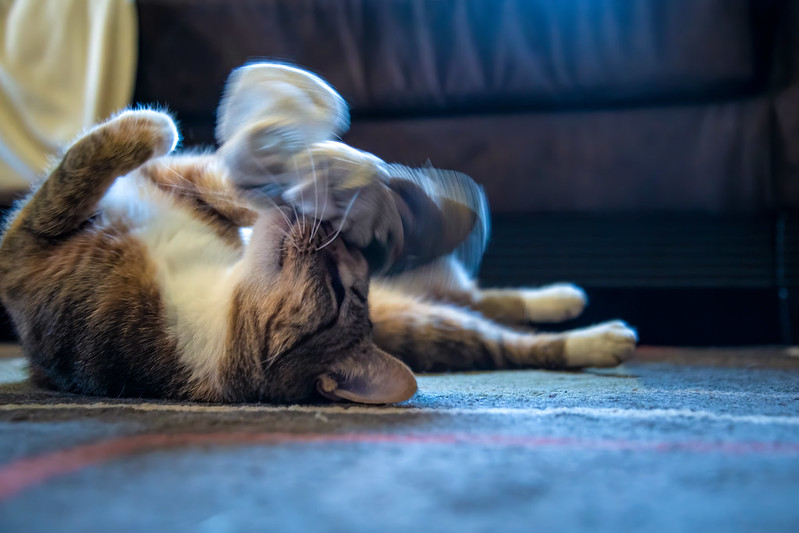 ← The Big Idea: Lif Strand
Why I Like Photography →