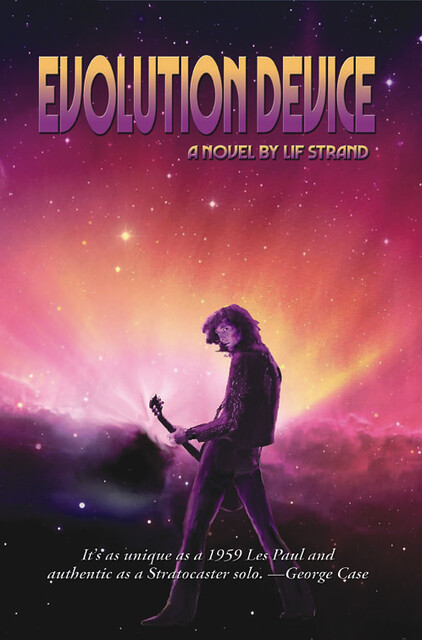 Music can be life changing, but as Lif Strand found out in writing Evolution Device, turning that life-changing feeling into a novel can be a challenge worthy of the gnarliest of musical performances.

Music is powerful stuff. It enters the ears and takes over the brain. If that isn’t power then I don’t know what is.

I’m not much of a musician, but music is right up there with the most important things in my life. Even so, I can’t let myself listen too much. Not if I intend to accomplish anything. Where there is music there is me at a dead stop, intent on what I’m hearing. Even in stores. Yeah, that’s me, transfixed in the aisle. Not comparing cans of peas on the shelf but lingering under the ceiling speaker till a song is over.

My obsession started with Classical music. I found Buddy Holly, then Link Wray, Motown, and the Ventures. And then the epiphany: what is now considered classic rock. My vinyl treasure horde, worth every penny.

I knew in my heart that real music came from melody carried by notes, not words. Forget lyrics. My soul resonated to the voice of the electric guitar. Clapton and Keef, Harrison and Hendrix, Mayall & friends, Santana – I couldn’t get enough of them. I named one of my dogs BB and another Lucille. I lived for riffs that yanked me out of the path of predictability, for solos that shot me into the realms of the gods, blowing my mind along the way.

But Jimmy Page. I loved his guitar before I knew who he was, back when he was a session man on at least half of the songs I was listening to. Over time I came to realize that his musical genius bore an extra something I couldn’t quite identify but that I craved beyond any other. The voice of his guitar slithered into my ears and bypassed my brain, not just resonating but transforming my soul.

Shortly after I began wrestling with the first draft of Evolution Device in 2011 I started a blog about Jimmy Page’s music. I needed a name for that extra something that so enchanted me. I wanted to identify the sorcery that raised pitch, rhythm, dynamics, and timbre to another level, that ineffable something lost when the music was performed by others. That power that changed duplicable into unique, using energy from… what? Transforming base into noble… how?

Energy, power, transformation, base, noble: Alchemy talk! Why not just call the energy magic? It made sense to me. Aren’t music fans always going on about the magic in the songs they love?

What if the greatest acts of creativity — the ones that seep into base souls and lift them to a nobler state – what if they really were acts of magic?

Wow. That was a story I needed to tell.

The ideas I blogged about were the foundation of Evolution Device, a story of music and magic. Writing the first draft should have been a piece of cake, what with all the time I had spent on the subject — but no. I had to flog myself to get the words out. It wasn’t pretty.

How could that be? Blogging had been so easy! All I had to do was think a little, then write down my ideas in a logical fashion, explain the basis for my thinking, and then present my conclusions. So simple. So straightforward.

So not a story.

I despaired. I was no storyteller! I’d been a non-fiction writer for years. The people who paid me expected me to build arguments for them while poking holes in their opposition’s positions, but not to make stuff up. Even blogging about magic was not really making stuff up, not in the sense of telling a story. All that research into the history of magic, all those precedents for my theory that magic and creativity are essentially the same, all the delightful serendipities that came my way to bolster my ideas, all the crafting of logical arguments: Worldbuilding isn’t storytelling

The first draft of Evolution Device was 450 pages and it unleashed… nothing. I knew my characters, could so clearly see the scenes, and praise the gods I could write dialog. It was all so there in my head but on paper? Meh. I poured even more into it but it didn’t matter. I had the right ingredients but the wrong incantation. And the more I tried, the more muddled it got.

I was done. No point in putting more time into a lost cause. I started on a contemporary mystery that had not a bit of music in it. Except my musician characters wouldn’t let me go. The gigs, the parties, the sound checks, the groupies, the dealers – the music in my head — I dreamed them at night and they haunted me by day. I cursed them, those made up people, because I knew what I wanted to say but not how to tell their damned story.

Eventually I came to my senses. I throw the problem at a professional editor. Boy howdy, was that a good idea! With my editor’s help I created a new writing rule: “when in doubt, chop it out”. I did away with a hundred fifty pages. Fixed the mixed points of view. Dumped narrative and added dialogue. Rewrote the beginning and the ending and a bunch of the middle, too.

Lilith is a spirit bound to a physical body by the guitarist whose muse she is. Eddie is succumbing to the excesses of fame and fortune, the demands of a supernatural guitar, and fear of the power he was born to wield. His bandmates sense how close Eddie is to the edge but can’t let him stop. All hunger for the energy of the audience that both consumes and fuels the wild magic that is their music.

The magic of creative drive.

The story I had in mind all along.