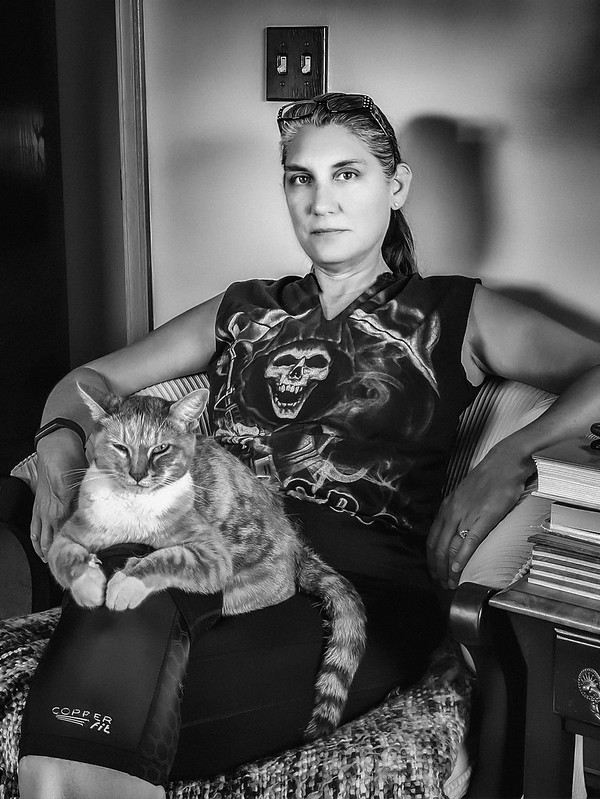 In fact, the picture above typifies many of the reasons why I enjoy taking pictures, getting them ready for presentation, and then showing them off to the world. Let me enumerate them for you now.

1. I have a lot of photogenic subjects around me: Krissy, obviously, and the cats, but flowers and clouds and sunsets and people I know and so on. Some subjects lend themselves to photography, yes, but the other thing is once you start taking pictures on a more than casual basis you realize that “photogenic” is not just about pretty or striking but what you can do to whatever thing to make it the subject of a compelling photo. You could take a picture of a fork and make it look compelling and interesting. “Photogenic” is as much about the photographer as the subject, and that was a cool thing to learn.

2. Good pictures are everywhere. The picture above looks studiously posed but is not. Krissy happened to come into my office to talk to me about her plans for the day, Sugar leapt up into her lap to be petted and then settled down on her knee. I grabbed my Pixel 4 phone, opened up the camera app and shot three photos of the two of them in rapid succession. One of them (this one, obviously) was good enough to refine further. I couldn’t have planned this shot (I mean, I could have, but I’m almost certain the cat would not have cooperated), but the fact it was there literally for the taking is a reminder that so much of what is worth seeing in the world isn’t planned; from a photography point of view it’s nice to be living in an age where a decent camera is usually within reach. Certainly not every photo I snap is gold — Out of ten pictures I take, four are blurry and at least two have people doing weird things with their faces — but enough of them are to make it worth it.

3. Photography hardware and software are conducive to how I do photography. I am not a studio photographer, nor am I one who usually uses the more complex setting of his camera; I use mostly natural or ambient lighting and I mostly keep my dSLR settings on “auto” for ISO and shutter speed. This means outside of basic composition of the shot (i.e., placing myself or my subjects somewhere to get the best picture) I do everything else in post-production, primarily with Photoshop but with some other programs as well, either standalone or as add-ons to Photoshop. I make pictures this way because it works for me, and also because as a self-taught photographer this is just how I have accreted knowledge and process.

This doesn’t mean my way is right — other photographers might find my process curious or laborious or the long way around to do things, and as I go through and learn more about photography, I’ll often find some way of doing things in-camera that, had I known earlier, would have saved me a lot of pain in the ass post-production fiddling. But I don’t actually mind that! I don’t kick myself when I learn something that I maybe should have known earlier. It just means that now I have two different ways of getting to the same desired point for the photo. And the larger point is: No matter how you do it, today’s photography hardware and software usually allow you a way to achieve an effect or look that you want. Also, here’s the thing:

4. I find fiddling with photos enjoyable and relaxing. The picture you see above has been altered from what came out of the camera in a number of ways: One, it’s in black and white where the original was in color. Two, before it was black and white, I went and did things with the lighting and color balance to give a more dramatic presentation, and to do things like even out skin tones and shadows. Three, I used Photoshop to clean up cat hair on Krissy’s clothes, and irregularities in the paint on the wall (I tried taking out the light switch but did a bad job of it, so it stayed). I played with various filters, in color and in black and white, to get a look I liked — for this specific black and white photo, I actually used a particular color filter (after all the other stuff I did to the photo), and then desaturated the photo’s colors. And then, at the end of it, I added a light dusting of “grain” to the photo, to give it a little bit of texture that all the post-processing I did had taken out of the photo.

And, I enjoyed every fiddly, nit-picking moment of that process. It’s fun to sit there on Photoshop and move sliders and apply brushes and slowly make a photo into something you like, and maybe want to show others. It’s a process I can get lost in, and in doing so forget about other things for a bit. Also, it’s a creative process that for me has a quick(er) result than my usual stock in trade: in the space of a few moments or an hour, I can make something I find artistically satisfying. As a novelist, whose books usually take months to compose and complete and then often even longer to go out into the world, this is something I appreciate quite a lot. Look! Art! In a couple of hours from snapping the photo to putting it out into the world! Wheee!

And it doesn’t even have to be “art” for me to enjoy it. One of my favorite things to do is, when friends post old family pictures on Facebook or elsewhere that are yellowed (or magenta-ed, honestly, that usually what happens to old photos), is to take the snap and do a quick color correction that brings the photo closer to what it was when it was originally taken. It’s a five-minute thing, it’s fun, and generally people are like, oh, cool, thanks. Process is enjoyable sometimes, folks, as much or even more than the final product.

5. It’s not my job. I know a number of professional photographers and they have a very cool job that generally speaking I do not aspire to. One, because I already have a very cool job, and, thank God, I don’t need another at this point to eat. Two, because I stepped in to be an emergency wedding photographer once, and having done so I have some small inkling of how difficult the job is when other people’s expectations are on the line. Three, because I’m good enough to recognize where the skill/knowledge gap is between me and the professional photographers of my acquaintance, and what I would need to do to level up, and, meeehhhhh I’d rather not?

But, and mostly, four: because I enjoy photography as a hobby, and as a hobby it provides me certain artistic and mental benefits which are actually useful and important to me. So that’s where I’m going to keep things for the most part. Do the occasional photo shoot for friends? Sure, why not? (I did some author photos for some folks recently and it’ll be cool to see those in their books.) Do that on the regular? Nah, I’d rather take photos of my hibiscus plant and make it look like an alien appendage just because that looks cool to me. 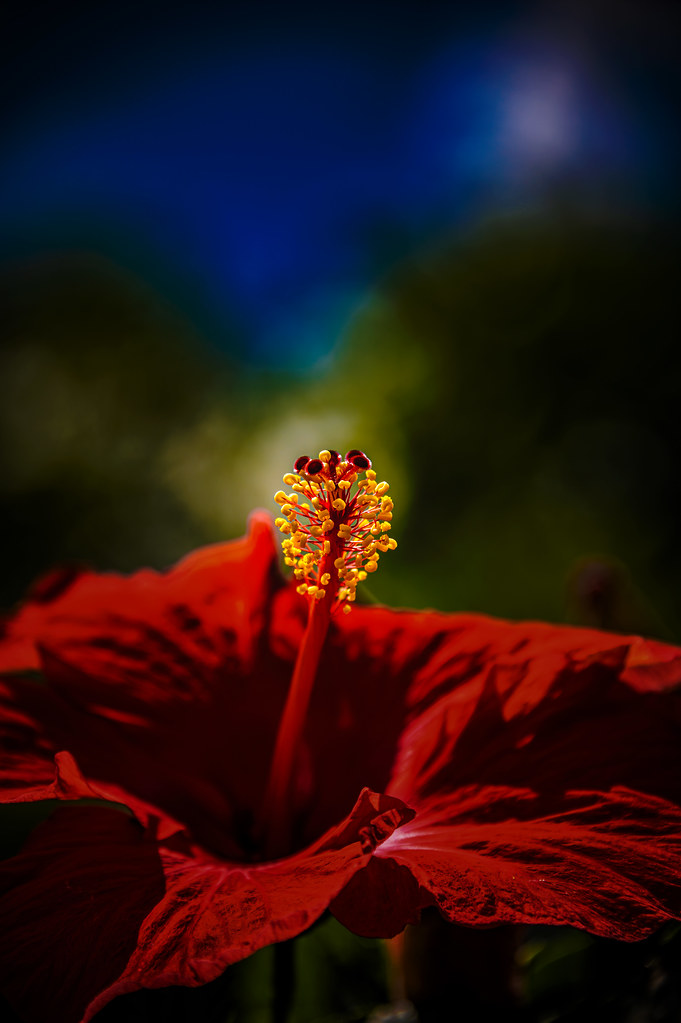 6. Because memories. Which is why the vast majority of people take photos, so I’m not special there. But that doesn’t mean it’s not important. As it turns out I don’t have a huge number of photos from when I was growing up, or indeed, really before the advent of digital photography at the turn of the century. However, I have lots of photographic evidence of my life from about 2000 onward. There are those who suggest that people spend so much time taking pictures or video that they’re not actually experiencing the moment, and I think there’s a small argument for that. One’s memories should not be just looking into a screen or viewfinder. But I also think you can do both: Experience the moment, and at some point in it, record it in a photo to help remember it better later.

I also think photos can be their own moment; not just what you’ve captured, but the experience of the photo in itself. That’s a real thing, too, and and experience worth having. As well as the experience of everything else that comes with making a picture from that photo. I enjoy the whole experience of photography, from shot to showing. I’m glad to have that experience. It makes my life better.