The Big Idea: Linden A. Lewis 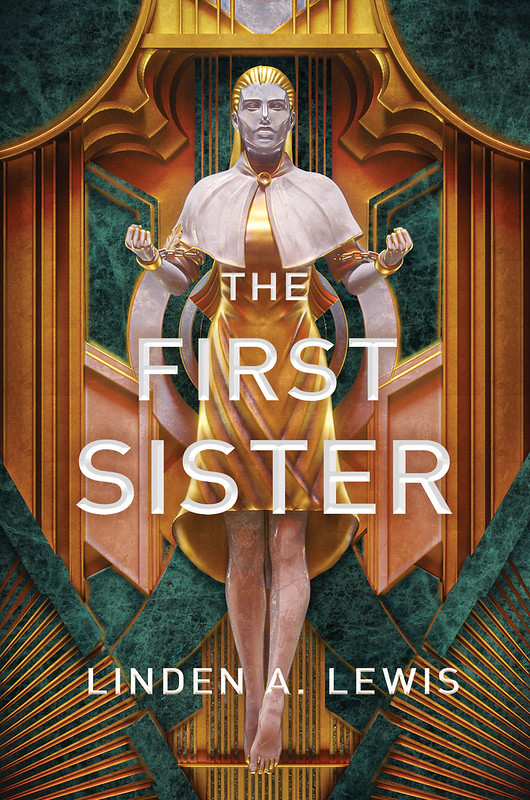 Today on the Big Idea we have The First Sister by Linden A. Lewis — a novel about a hero with no name and no voice, and the power of three words that, in this world at least, were (and are) not said enough.

I read a lot of stories about war and revolution. With the way our world currently is, who doesn’t like a story where the corrupt system is overthrown by the little people? But one of the things that irks me as a reader is to see a world in which there are people enslaved in sexual service, only to have those people relegated to the sidelines once the heroes march in.

Or maybe (as in another popular series I love but had to question) the former-sex-slaves become part of a problematic rebellion bent on terrorism. Or (ever so popular a choice) they die so our warriors can mourn them but ultimately keep on being warriors. So where does their justice come in?

As the popular refrain goes, “If you don’t like it, write your own.” So I did.

“First Sister has no name and no voice.”

That was the first line of my query letter. It’s now the first line that readers see when they check out the synopsis of the book. “No name and no voice” means First Sister isn’t just a comfort woman who’s had her bodily agency taken away, she’s one who has lost her core identity because of the people in power. She doesn’t have a name except for the title they gave her. She doesn’t have a voice because they took it away so she won’t repeat the secrets she hears in the line of duty.

If you’ve been a victim of sexual assault, you’re probably nodding along, identifying with those words. If you haven’t, you might be wondering, “What the hell, Linden? Why write a nameless, voiceless woman?”

The core idea of the Sisterhood, the institution First Sister is part of, came partially from the dichotomy between Madonna and whore. A woman is either a saint or a sinner, a family member or a sexual conquest. How often women have to evoke images of a man’s mother, sisters, or daughters to summon empathy was part of the core conceit behind the Sisterhood, where all positions are named after family members: Sisters, Aunts, Cousins, Mother.

But, as in our world, believing victims is not just a problem among men. Women (read: white women) who benefit from this patriarchal system also work to uphold it. It is forces like these that work to keep First Sister and others like her from ever speaking out against the violence they experience.

I remember the humble beginnings of the #MeToo movement. It started so simply: Post #MeToo as your status if you’ve been sexually assaulted. I watched the posts roll in, seeing just how many of my friends were exactly like me. But I bit my tongue. I have family on my social media channels, and my sexual assault isn’t something I’m comfortable talking to them about. That day, I didn’t post anything except comments: “I believe you.”

But the #MeToo hashtag gained steam, and more and more people felt comfortable speaking out. Those replies were what I longed for, the reassurance that someone believed what I’d been through. Little by little, I began taking back pieces of my agency by speaking with friends, by telling people what I’d been through. And every time I heard “I believe you,” I felt like a piece of me healed a little bit.

You see, no one had ever believed me before. I was just a child when it happened. He was a family member. I was supposedly a verbose kid who would talk to trees when bored, yet no one “understood” me when I tried to explain what had happened. And when I tried to bring it up later, when I was older and had more vocabulary? No one wanted family drama.

Part of the reason I kept my mouth shut for so long, even as #MeToo went from hashtag to movement, was because I didn’t want to deal with the naysayers. “Why didn’t you report him?” I still fear people asking. “Why don’t you report him now?” Or, the comment I fear most of all: “Where’s your proof?” Without proof of something that happened 20-something years ago, people could say I’m a false accuser.

Sadly, I find I’m not the only one who is nameless, who is voiceless in these matters. The US Department of Justice reports that the number of rapes and sexual assaults that are never reported far outweighs the number of men convicted of rape because of fake accusations. Actually, it far outweighs the number of fake accusations. Period. Obviously I’m not the only one scared of saying something, who believe officials won’t be able to help. And let me be abundantly clear: Officials like police officers are far less likely to listen to someone who isn’t cisgender, white, and/or straight.

In The First Sister, I wanted the novel to reflect this world where “I believe you” is intrinsic, so I very specifically did not include any graphic sexual abuse scenes. Sexual abuse happens; it’s something the characters talk about having faced, but no one ever questions them. No one ever disbelieves them. The last thing I wanted was for this book to be seen to glorify sexual assault in any way or to become akin to ‘torture porn.’ Instead, the world and the characters explore the dangers of rape culture. They explore what it’s like to fight against a patriarchal system upheld by men and (again, rich/white) women.

I believe victims. I stand with them. And The First Sister is my love letter to everyone who has been forced to deal with rape culture, whether they feel comfortable telling their stories or not. So when it comes to First Sister? She is far more focused on seizing that culture by the throat, choking the life out of it, and creating a revolution. She is a sexual abuse survivor, but she is also the hero.

4 Comments on “The Big Idea: Linden A. Lewis”