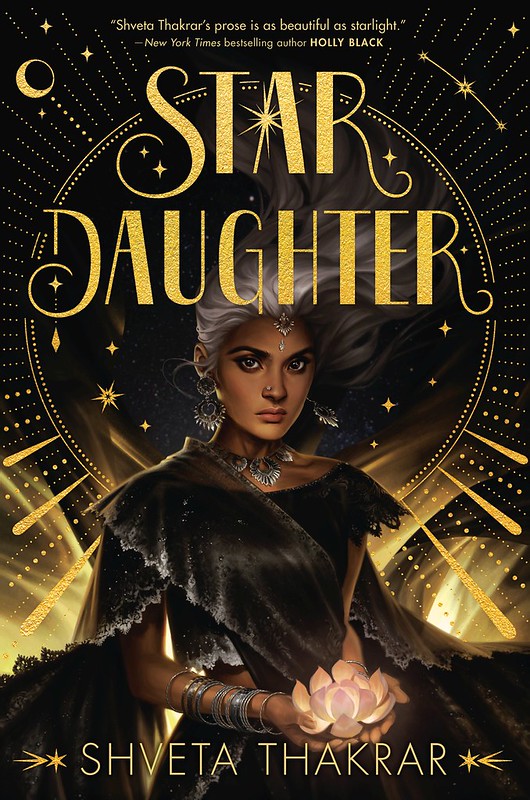 Hindu mythology, women in power, and spicy food are all just a few of the things featured in today’s Big Idea for Star Daughter by Shveta Thakrar — also featured is an examination of the question: where does one belong, when one is of two worlds?

Sometimes it’s hard to point to the exact thing that inspired your novel. Luckily for me, I have an easy answer to that question: Neil Gaiman’s and Charles Vess’s illustrated novel Stardust, but combined with Tanuja Desai Hidier’s contemporary young adult novel Born Confused.

As I said, that’s the easy answer. The more complicated one goes something like this: having spent my high school years as a brown girl isolated in a very small American Midwestern town, seeing someone like me in any of the books I devoured would have meant the world. I didn’t even know that was possible! So in my mid-twenties, once I started writing seriously, I made the decision to only write characters like me, people who were desi and Hindu. I couldn’t attempt to speak for Indians in India, nor did I want to, but I definitely could write for American kids like the one I’d been and do my part to help fix the dearth of good representation.

The thing is, I didn’t want to write stories about the pain of being brown. My entire life, I’ve been enamored of all things lush and numinous: fantasy novels and movies, fairylore, mythology, my own rich inner worlds. I believe in magic, and I love story. To me, the two are made for each other, so of course I would write fantasy.

The idea of a star falling to Earth and taking the form of a person had enchanted me ever since I first happened upon a copy of Stardust in an independent bookstore back in 2001. I bought it on the strength of the title and cover alone, and the plot stayed with me, so much that, in 2013, I decided on a whim to write a short story about a girl whose mother came from a Hindu constellation. Once I realized the girl would need to go on a quest to find her mother, it quickly became a novel.

I took advantage of the many drafts Star Daughter went through to stuff it with all the things that would have delighted my teen self and delight me even today: desi characters; sparkling silver hair; music; tons of delicious spicy food; lyrical, image-rich prose; Hindu mythology; intergenerational family relationships; a best friendship like I wish I’d had; women in multiple positions of power; gorgeous clothes; the starry court; blue mangoes and skyberry cordial; and the magical Night Market of my heart. (Oh, I had sooooo much fun dreaming up the fairy tale–worthy wares for sale at the Night Market, and I’m still waiting to find the peacock-beak entrance myself!)

But at the book’s heart is a Gujarati girl named Sheetal, who’s half human and half star, caught between worlds the same way I always felt, and how she deals with it. In her case, she accidentally burns her human father when her starry flame blazes out of control, forcing her to ascend to the heavenly realm to find her celestial mother and obtain her help—and in order to get that help, Sheetal has to win a competition she has no interest in entering.

I can’t say I’ve ever been in that particular scenario, but I absolutely channeled my own confusion about where I belonged and what I wanted for my life into her journey, and I hope it will resonate with anyone who chooses to pick up Star Daughter, whether teen or adult, desi or otherwise.

As Sheetal’s sidereal family would say, may you burn bold in the deepest night.