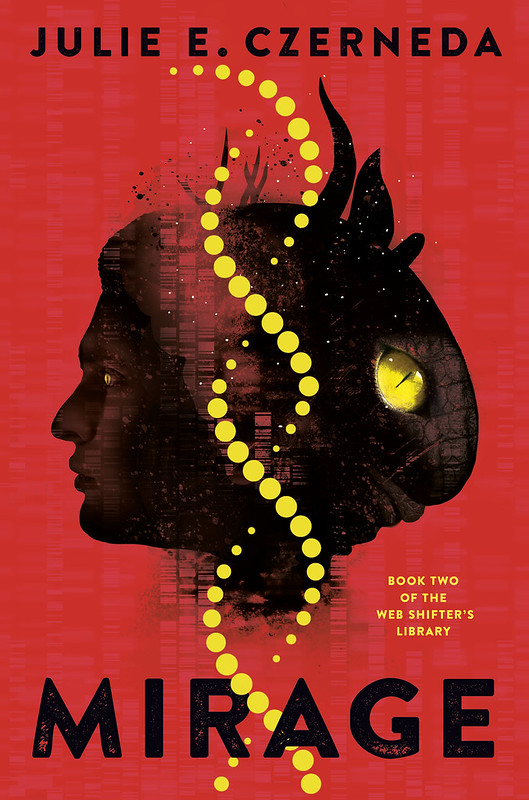 The library in question is the All Species’ Library of Linguistics and Culture. It began, quite simply, as a way for trouble to find my characters: Esen-alit-Quar, the semi-immortal shapeshifting Web-being, and her Human friend, Paul Ragem. After all, if you, like Esen, must keep your true nature hidden from the rest of the universe, it’s not that easy to jump in a starship and careen around. There’s the biological accommodation (waste disposal) to consider, let alone the diet for whatever form she manages to get stuck in, then there’s that other problem.

If a Web-being needs living mass in order to change her form? Well, whoever’s on the ship best to get off in a hurry. Esen would be very sad, but biology wins.

By the end of Esen’s third book, Hidden in Sight, I’d dealt with starship issues aplenty and decided it was time those in trouble came to Esen, in a single interesting place. I might have created a transit hub or interstellar shopping mall. Why make it a library, you ask?

When I first envisioned Web-beings, it was a thought experiment on a biological basis for being semi-immortal. I arrived at the notion of organisms who manipulate their molecular structure using energy to repair aging and damage. It led me to aliens who’d hide themselves by cycling, as I called it, into the form of shorter-lived intelligent species. To be convincing, they’d need to know how to behave as one. Thus I had them (there were six at the start) collect and share everything they discovered about a species, from its biology (and thus how to be that form) to every aspect of society and culture.

When your memory consists of your flesh, you’re able to store vast amounts of information, which Web-beings exchange by biting off bits of one another. (I love my job.) Rather than waste that long lifespan—and personal sacrifice–I gave them a uniting purpose: they would be archivists of the achievements and existence of ephemeral species, who tended to go extinct and be forgotten. Mind you, they’d be secretive ones who didn’t ever intend to share outside themselves but, still, archivists. In other words, librarians who locked the doors and ate the keys.

From her first mission, Esen–being Youngest and different and slightly accident-prone–took a more interactive approach. She became the first of her kind to make an ephemeral friend when she rescued Paul Ragem, a first-contact specialist and linguist. When she finds herself the only one of her kind, Paul sets up an information gathering and analysis network to keep Esen’s knowledge current, vital to her continued survival.

And more. Together, they find themselves resolving crises of ignorance where two or more space-faring species come into conflict through misunderstanding.

The underlying premise of each Esen story–be it the original Web Shifter three, or the new Web Shifter’s Library series–is that the biology of intelligent beings crucially impacts their ability to understand one another, a speculation I’ve always found fascinating. Consider communication. How do we begin a conversation if the Other doesn’t have a mouth or ears, and we don’t know they use scent instead of sound? What might we do that’s normal or moral behaviour for us, yet to the Other offers profound offense or threat? How do we negotiate with a species with a lifecycle or lifespan profoundly different from our own? I could go on, but…

I’ve Esen for that.

The knowledge Esen contains in her flesh, combined with her ability to become another species, not only lets me write from the point of view of any, it makes her uniquely suited to comprehend both sides of a dispute. In essence, she’s a self-searching database. (One that tends to explode when upset, but that’s an aspect we needn’t consider here.)

Esen’s goal, with Paul’s help, is to correct misunderstandings before they escalate into conflict and potential extinction. But they need to know those misunderstandings are happening in time to act, while keeping Esen’s true nature secret.

It’s not as if decision-makers are going to know what they don’t know.

Come to the Library

Bringing me back to why a library, the All Species’ Library of Linguistics and Culture in particular. I’d made it Paul’s dream to share with everyone the wealth of knowledge inside his best friend. A fantasy that seemed impossible, given the risk to Esen’s secret, until Esen herself declared it their future. They would set up a library devoted to the most problematic areas of communication between biologically different organisms: language and culture. Anyone who comes is permitted to ask one question per visit, so long as they provide an item of new information in return. Along the lines of “to take a book, you must donate one we don’t already have.”

Esen’s knowledge base could continue to expand and be current, while she would answer the question through the Library, using the knowledge and comprehension of a Web-being.

If a question suggested a potentially dangerous misunderstanding, alarms would sound.

During the Library’s first year in operation, a steady clientele of non-Humans passed through the doors on a daily basis, the majority with new information. Mostly slang and verb forms, but there’ve been some interesting gems. While the alarm didn’t sound, in Search Image Esen and Paul used the Library to help their friend Evan Gooseberry resolve a crisis on Dokeci Na. In the just-released Mirage they meet those who present their own bodies as new information and ask for sanctuary.

While in—suffice to say, not only is the Library every bit the handy plot device I’d hoped in planning Esen’s future adventures, it’s proved to be full of opportunities to explore biology and communication; often messy, full of surprises, and important.

A Final Note on Libraries

When I was young, every Saturday morning my Poppa and I would drive to the local lumber store to pick up nails or whatever he needed for a current project. We’d go up and down every aisle with wood to imagine what we could make next. Instead of going straight home, we’d stop at the library. I’d borrow another armload (the librarians let me) of science fiction and fantasy and, having read them?

I’d imagine what I could make next.

So while I’ve made it sound thoughtful and crafty, creating a library in order to tell more stories about my favourite ever-helpful shapeshifting alien, Esen-alit-Quar–Esen for short, Es in a hurry or between friends?

How could it be anything else?

← Kamala Harris, Vice-Presidential Candidate
The Last Emperox a Finalist for the 2020 Dragon Awards →