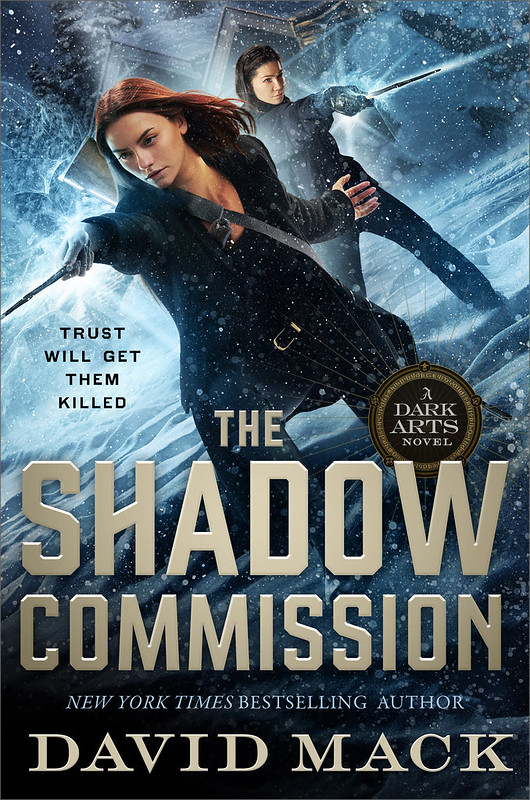 Betrayal is never a simple thing. In this Big Idea for The Shadow Commission, New York Times bestseller David Mack pulls back the curtain on the complexity of this concept, and gives us a closer look at the process of turning coats.

The Shadow Commission is about betrayal: how we betray ourselves, how and why we betray the trust of those who put their faith in us, and how the things we say and do might drive others to betray us. It’s also about how we atone for those sins.

Its theme informed my choice of the novel’s epigraph, which comes from one of William Shakespeare’s most famous tales of treachery:

Let not light see my black and deep desires:

The eye wink at the hand; yet let that be,

Which the eye fears, when it is done, to see.

The simplest expression of the idea comes at the very start of the book, with a sneak attack that vitiates a long-standing assumption of détènte. From there the abrogations of the truce between Goetic and Pauline sorcerers (aka Black and White magicians, respectively) become grander and increasingly violent.

Though dramatically useful, such depictions felt superficial to my desire to plumb the depths of what real betrayal means. As the story progresses, my characters variously find themselves falsely accused of violating their oaths of duty, breaking sacred promises of friendship, or, in the cases of those in the service of the Catholic Church, ignoring their vows to God.

My main character, Cade Martin, bears a particularly heavy burden this time around. He comes to feel that his tragic failure to defend all of his apprentices from his enemies’ assaults constitutes a betrayal of his students’ trust in him as a master. A toxic combination of guilt and regret hampers Cade’s ability to take action (out of fear that he might jeopardize the lives or safety of his wife, friends, or allies) and ultimately compels him to take drastic action to atone for what he alone sees as his failures of leadership.

For Cade and his wife, fellow Midnight Front veteran Anja Kernova, the cruelest cut of all seems to come when they learn that they and their apprentices have been betrayed by one of their own, by Anja’s favorite adept, a woman named Lila Matar.

By the book’s midpoint, Cade feels broken and lost. It falls to his former wartime enemy and now ally, Briet Segfrunsdóttir, to talk him off his metaphorical ledge and bring him back into their shared fight for survival. But even in a moment of comfort, Cade remains on the lookout for the next betrayal coming his way:

Briet offered him a faltering smile. “So let’s go back to shore, get dry, and figure out our next move.”

His eyes remained downcast as he considered her offer. He looked weary. More than just bruised and worse for wear. As twilight turned to shadow, Cade Martin looked humbled.

“How are we supposed to fight something this big?”

“As long as you watch my back, I’ll watch yours. Agreed?”

There was disbelief in his voice. “We’re watching each other’s backs?” He let slip a rueful laugh. “Twenty years ago we’d have put knives into them.”

“And we might yet.” She dismissed the idea with a tilt of her head. “But that’s a problem for tomorrow. So . . . are you with me or not?”

He gave in with a nod, and together they started the long walk to shore.

The novel’s most grievous betrayal, of course, is saved for the end of the story, when the turn of a single person’s allegiance can do the most possible damage, for reasons that I hope will seem not only perfectly clear in their moment of revelation but also, in hindsight, inevitable.

Last but not least, to me this tale of betrayal would have felt incomplete without at least a glimmer of real loyalty. Not everyone in The Shadow Commission succumbs to avarice or fear. Some friends and allies hold true to their bonds of friendship, even when doing so comes at a cost.

In a tale in which too many faithless actors seem ready to compromise their honor and abandon courage, there are still a few noble souls who will not break, who will not yield no matter how many people turn against them.

← Periods. What Are They Good For.
Fuck You, I’m Voting →