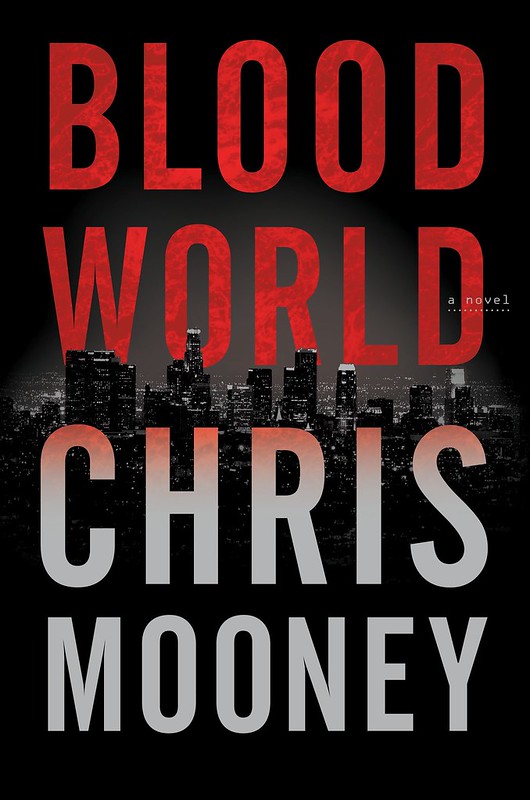 In today’s Big Idea for Blood World, author Chris Mooney asks the tough questions, hitting hard on the morality of exploiting some people to help others, making readers ask themselves if they would willingly benefit from others’ suffering for what they thought was a noble cause. Read on to see how Mooney puts a sci-fi spin on a very real world issue.

Let me explain what happened.

Readers – especially those who devour thrillers – always want to know where a writer gets his or her ideas. Sometimes it’s an epiphany (think of shock-and-awe God from the Old Testament speaking in a voice like thunder to Moses), but more often than not it’s something banal (I was flossing my teeth/folding laundry/showering/picking up after my dog, and an inner creative voice said, What would happen if …?”). Some people like to pitch ideas to me, convinced they’re sitting on a bestseller (“You know what you should write?  A story about a pandemic!”), but that’s a story for another time.

Blood World followed the latter – specifically, I had been reading an article about how a lot of rich Silicon Valley types are turning their tech talents to “bio-hacking” longevity, experimenting with full body transfusions mixed with different types of medications. My internal creative voice, which sounds and looks like a Boston construction worker who smokes like a chimney and enjoys canned beer, said to me: Huh. No shock-and-awe, no thunder, just huh.

Ideas are like seeds. Some take root and grow, while others – an ungodly amount, unfortunately – simply dry out and die. Blood World took root quickly, growing into an idea involving “carriers” – people with a gene that allows their blood to operate at maximum efficiency. They live longer, are healthier, and look much younger than their actual age. When a regular person – a “non-carrier” – gets a full-body transfusion of carrier blood, mixed with a certain chemical cocktail, the results are fucking amazing – bye-bye fat and wrinkles, hello smooth skin, increased muscle mass and nearly unlimited energy. Order now, and as an added bonus, we’ll throw in the single most intense orgasms of your life for free!

The idea had a slight sci-fi bent to it – which I liked … and didn’t like. I wasn’t interested in writing sci-fi – I do crime/psychological thrillers and have zero interest (or skill) in the world-building that comes with sci-fi/fantasy – so I decided to set the story in the not-so-distant future where these carriers are getting kidnapped in record numbers and imprisoned in these illegal “blood farms,” where their blood is sold for big bucks to the rich and powerful. I wrote the first draft in a year, while also working on another book.

I subscribe to the Stephen King method of writing, which states a writer should put away the first draft, for several weeks, before revisiting it. I did, and when I went back to reread it, I found the first draft was not only solid, it checked off all the important boxes. Cool idea?  Check. Bad guy who operates the single most profitable and secretive blood farm in California?  Was the draft a compulsive page-turning crime thriller with interesting characters and interesting scenes?  Check, check, and check.

So why did I dislike it so much?

I couldn’t put my finger on the problem until a few months later: it checked off all the appropriate boxes. Yes, the idea was interesting, but the end result was like a lot like that Netflix reality TV show Too Hot to Handle, where beautiful, horny singles get shitfaced together on a Caribbean-type island and take part in a lot of drama while getting even more shitfaced and trying not to have sex with each other in order to win a cash prize: fun, thrilling, dramatic, and compulsive to watch, but, ultimately, empty. Blood World didn’t linger with me when I finished reading because it lacked the difficult moral choices I love in stories. The characters, while interesting, went off and did their duties and fulfilled their roles.

Ideas, even good ones, more often than not require you to go back to the drawing board, again and again, until you get it right. I went back and changed some aspects regarding the story (the younger the carrier, the more potent the blood, with longer-lasting benefits) and the main characters (a sympathetic bad guy that readers will grow fond of an actually like; a kick-ass female protagonist). Then I dug into the morality issues.

And what if carrier blood not only made you look younger but could reverse if not cure diseases like cancer? If your loved one was terminally sick and you had the money, would you buy carrier blood to save his or her life knowing that the cure came from some missing young person forced into slavery? If you didn’t have the money, what would you do it get it?

How far are you willing to go to protect and save the people you love the most?