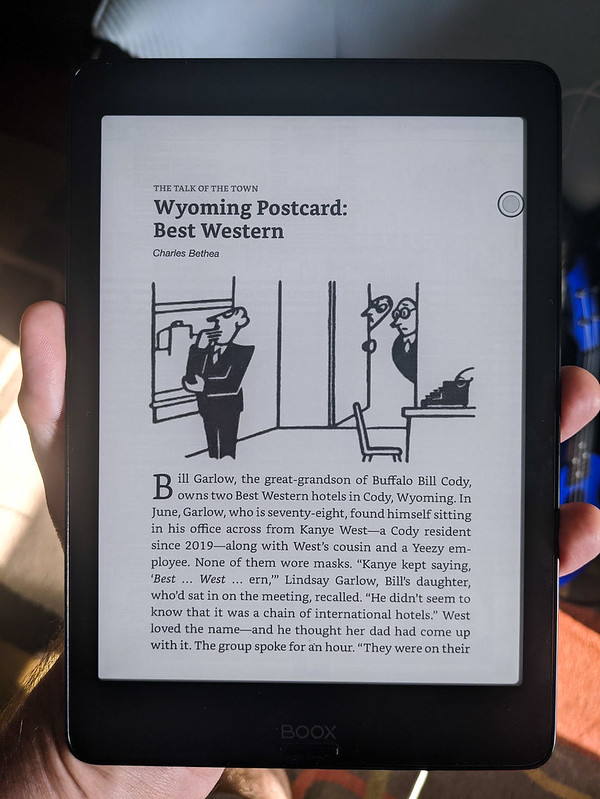 I’ve been wanting to get a new e-ink book reader lately, but the problem with doing that is, since most e-ink readers are tied into one book-selling ecosystem or another, you pretty much have to choose which retailer you read in e-ink from, whilst everyone else you have ebooks with, you read on a regular glowy screen. I had a Nook reader for a while and it was good, but there were some things I had on Kindle I couldn’t get on it, and so on. It’s frustrating.

Then over the weekend I read this review of the Onyx Boox Nova 2, which is not only an ebook reader, but is an actual bonafide tablet running Android software — older Android software, to be sure, but new enough that every ebook app from every retailer works on it perfectly well. And as a bonus, as an actual Android tablet, you can use it for other things as well. It’s not just an ebook reader, and it’s not tied into a single bookseller ecosystem.

I got it and spend most of the afternoon fiddling with it and it’s… doing what I wanted it to, perfectly well indeed. I have my Kindle and Nook and Google Books apps up and running on it, and they’re presenting text in the way e-ink readers present text, without eyestrain, which I appreciate. There is backlighting, so one can read it in less-than-perfect lighting, and the thing has 300 dots per inch resolution, which for e-ink really is more than sufficient. It’s only monochrome, but I knew that going in, so I’m not exactly disappointed. Strictly as an ebook reader, which is what I wanted, I’m satisfied and happy with the purchase.

As a tablet, it’s a very fine ebook reader. By which I mean to say, yes, in fact, you can use it for anything that has static text and pictures and it will do just fine, as long as you can deal with the fact that e-ink refresh rates are laggy as hell and that as a result scrolling is a thing you do mostly by feel (it has various settings to try to minimize lag while scrolling, but, yeah. The thing about a dancing pig, etc). If you’re trying to watch video, well, I don’t know what to tell you other than I admire your ambition. It will play music and podcasts just fine (I downloaded Spotify on it), although you’ll need USB-C headphones for that. No camera as well. It has a stylus to take notes with; I suspect I’ll lose that presently, as I do with most phone/tablet styli.

Other notes: You have to jump through some hoops to get Google to admit it’s a device that Google can do things on; I had to download new firmware and then go into the settings to have Google verify the tablet. So don’t give this to anyone who is completely hopeless techwise, unless you’re willing to spend an hour or so helping them to set it up (the thing comes with its own sideload-ish store, which feels sketchy). The thing is soft-touch plastic, which feels nice and is reasonably light, but the thing picks up fingerprints like you wouldn’t believe; I wiped it down to take the picture above. Battery life is fabulous because it’s e-ink. The manufacturer is Chinese, so if you’re paranoid about Chinese tech, maybe sit this one out (clearly I’m not all that paranoid).

Otherwise: Hey a universal ebook reader (well, almost, Apple Books is probably not happening)! Which in a pinch you can use as a tablet if you have a need for such a thing. That’s how I’ll be using it, and for that, it seems to be working just fine.