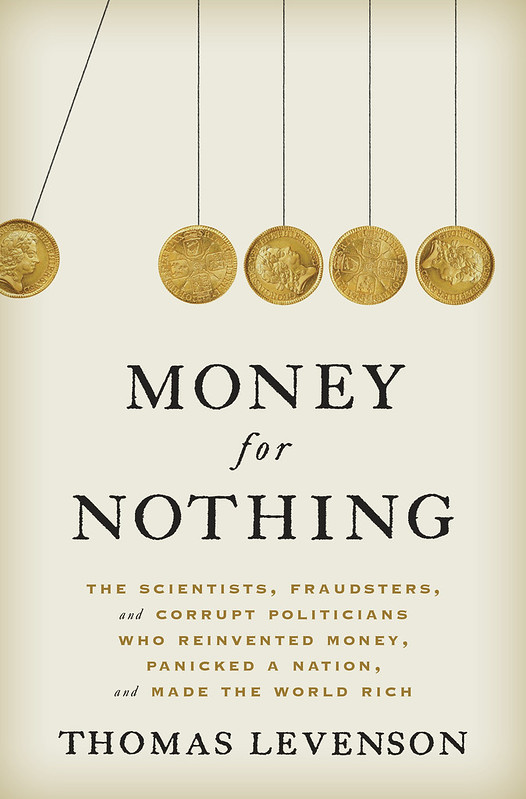 Author Thomas Levenson has discovered that when it comes to writing books, one thing truly does lead to another. And thus, we have Money for Nothing, a look at one of the most ruinous financial collapses in the western world, and how one of the greatest minds of the 17th century was caught up in it.

My books tend to happen because I can’t resist pulling on loose threads. Money for Nothing, emerged out of a quarter of a century of such tugging and unraveling—and over the course of that ridiculously long span of time, I discovered I had a problem that, I hope, I solved honorably in this attempt to reconstruct what it’s been like to live through moments of great change in the way humans think, and what they—we—think about.

Twenty-five years ago (sic!) I published my second book, Measure for Measure—a completely not-ambitious-at-all retelling of the history of western science through instruments, both scientific and musical.  That meant that the research for it covered two huge domains, and trying to wrestle the narrative into submission nearly killed me. Inevitably I found stuff that seemed incredibly interesting that I had to put aside. One such gift: a letter from a convict in Newgate Jail to the Warden of the Royal Mint—Isaac Newton–in which the condemned man begged for his life.

What? How on earth could a coiner from the flash mob of English criminal society come into contact with the greatest intellect of his day?  I had no idea—and the question was far enough off the path of my project that I couldn’t spare the time to dig deeper.  Flash forward a decade and that letter led me to what became Newton and the Counterfeiter, the story of what happened when Isaac Newton took over running the Royal Mint, signing on as a mid-level monetary bureaucrat.  In that job, he took on the duty of chasing the coiners and counterfeiters who were the enemies of sound money—which meant that Newton’s jailbird correspondence led me both to a ripping crime yarn and a way into what the scientific revolution was like when it was mucking about in the mean streets of 1690s London.

Then it happened again. Deep into that story, I came across this:  a stray mention that Newton had lost £20,000–roughly four million dollars in 21st century money–in a financial scam that happened exactly three centuries ago this year, an event called the South Sea Bubble.  Afterwards, he told his niece that he could “calculate the motion of heavenly bodies but not the madness of the people.”

That’s where Money for Nothing got its start: wondering why the smartest man of his day, someone who could surely do the math to expose the flaw in the South Sea scheme, got it so badly and expensively wrong.  The book that’s finally here has traveled from that starting point to a much bigger and (I hope) more fascinating narrative: how the wild ferment in ideas and ambitions in Britain in the late seventeenth century that we now call the scientific revolution created a culture of number and measurement that mattered in the daily life of those who lived through it.  From there, and how, as the Bubble played out, that disaster produced something very new: the modern financial capitalism that still plays out in all our lives, with all its wealth and woe.

I guess that’s a big idea: finding in a 300-year-old story of a money-mania a way to explore how seemingly abstract ideas about the natural world played out in the alleys and streets in ways that still matter to us.

Still, I had a problem.  Britain’s financial revolution, like the scientific one that helped spawn it, was the work of specific people. The South Sea Bubble and everything that led to and from it happened as individual human beings confronted problems or felt desire or lust (Samuel Pepys makes an appearance) or fear and all the rest. That was my problem:  I was writing nonfiction. I made a promise to any reader that what they found in the book is true.  My goal was to convey the world of the book as lived experience, to give the reader access to how its events were experienced, understood, and above all, felt.  But, of necessity, most of what I know about Newton and many of my characters comes in the form of records about what they did, not what was going on in their minds and hearts in the moment.

Sometimes there was an obvious trick available. Daniel Defoe is a major figure in the book. Jonathan Swift shows up, as does Alexander Pope.  Novelists and poets make a non-fiction author’s life easy: they write down what they’re thinking about, and how they feel as they do so—which makes it easier to create scenes in which the reader feels like they’re entering into the inner life of the person, place and moment.

But most of the major players were people like the Bubble’s mastermind, Sir John Blunt, or clever politicians like Robert Walpole, or relatively taciturn thinkers, like Newton himself.

The written record contains lots of information about what happened in the life of the historical Newton. He was a solitary young man when he invented calculus and first pondered gravity and problems of motion. Twenty years on, he capped the triumph of the scientific revolution with his great book, the Principia.  His resulting fame got him his job at the Mint, in which he opined on credit and interest rate policy (really!).  And finally, there are the buy and sell decisions in 1720. All those are facts.  When I began writing, I had no idea how to turn that list into my Newton, a figure who could come alive on the page.

The solution lay in that rueful, bitter quote he laid on his niece. He could calculate the track of the moon or the path of a comet.  He couldn’t similarly put human emotions—his own, I inferred, every much included—to the test of number.  That’s the end point, the destination for a character arc that began more than half a century earlier, when he was so entranced by the new mathematics dancing in his brain that he would calculate problems out to fifty digits and more.  Those columns of numbers stretching out across notebook page after page seemed to me to express some combination of obsession and joy at what his mind could do—along with an obsession with the certainty, the precision available within mathematics, and not in any other sphere of human experience.

When I put those two moments together, the young man stretching mental muscles with the power he was just beginning to recognize in himself and then his so-much older self, faltering in the midst of a money mania, I had an arc, a journey.  Newton can historically accurately be represented as a calculator, someone who subjected everything he thought about to number, even to the point of conducting a time and motion study on how many horses and men it takes to strike a given amount of shilling coins. That documented life of rational analysis sets up the formally tragic end to Newton’s tale within the book: the moment when even the most famously rational man of his day surrendered himself to the lure of easy money.

When I finally saw that link—that Newton responded to problems using the same tools throughout his life, until, under the pressure of the climactic event of my story, he didn’t—I felt like I’d cracked the central problem for the book as a whole.  Events became choices, and seeing how those choices evolved allowed me, and I hope readers, to imagine something of the inner life of people who lived through an extraordinary time.

Ultimately, that imagination, at least for me, evokes a sympathetic echo: if Isaac Newton himself couldn’t reason his way through the madness of the people, I know I can’t, along with, I suspect, almost all of us.  There’s a big idea in that thought too—which, ultimately, is what Money for Nothing is all about.