I Miss Travelling, So Here’s My Attempt at Travel Writing

When I was seventeen, I watched Yuri On Ice; a sports anime about a figure skater from Japan. In this anime, the main character’s parents own an onsen resort, or basically a hot springs/bath house kinda place. You may also have seen one of these in Spirited Away, but just in case you have no idea what I’m talking about, hot spring resorts (or onsens) are just like spas centered on a big ol’ hot tub with pretty scenery.

Upon watching the characters have an awesome time in the onsens, I thought, “wow, I gotta try this for myself”. And thus began my quest to find a hot springs resort in the US of A. As luck would have it, I found one. Literally one. Maybe I didn’t look hard enough, or maybe there really is only one in the US, but whatever the reason, I stumbled upon a place called Ten Thousand Waves, in Santa Fe, New Mexico. Or rather, right outside Santa Fe.

Finally, after like thirty minutes of Googling, I had found the resort of my dreams! Little did I know it would be three years before I went. I thought about it often and wished to go for so long, it felt like something I would never actually end up doing. I thought it would just be one of those things that stays on your bucket list for your entire life.

Incidentally, my 21st birthday finally rolled around this past December, and my parents asked me what I wanted to do for it. And I could think of nothing I wanted more for my 21st than to finally visit Ten Thousand Waves. So, my mom and I did just that! Right after the new year began, we set off to New Mexico for my birthday trip. Man, I miss travelling.

To my surprise, my mom bought us first class tickets, which I was totally stoked for. On the drive from Albuquerque to Santa Fe, I was astounded by the layout of the land. The scenery was so vastly different from my corner of Ohio. Red desert and mountains as far as the eye could see, stretches of highway with no buildings or towns for miles upon miles. I consider myself decently well traveled, but before this trip I had never been to any desert state, besides California. But basically the entire West is uncharted territory for me.

After the twilight shrouded drive, we arrived. Hidden in the snowy mountains (or maybe it was only snowy because it was January) was the place I had dreamt about for years.

Ten Thousand Waves has fourteen rooms. Two “Zen” rooms, eight “Townsman” rooms, and four “Emperor” rooms. These names basically mean, good, better, and best. The whole place is set up like a little village, with all the individual rooms being completely separate from each other and basically being like little one room houses. They each even have their own names. My mom and I stayed in a Townsman room called Hangetsu. 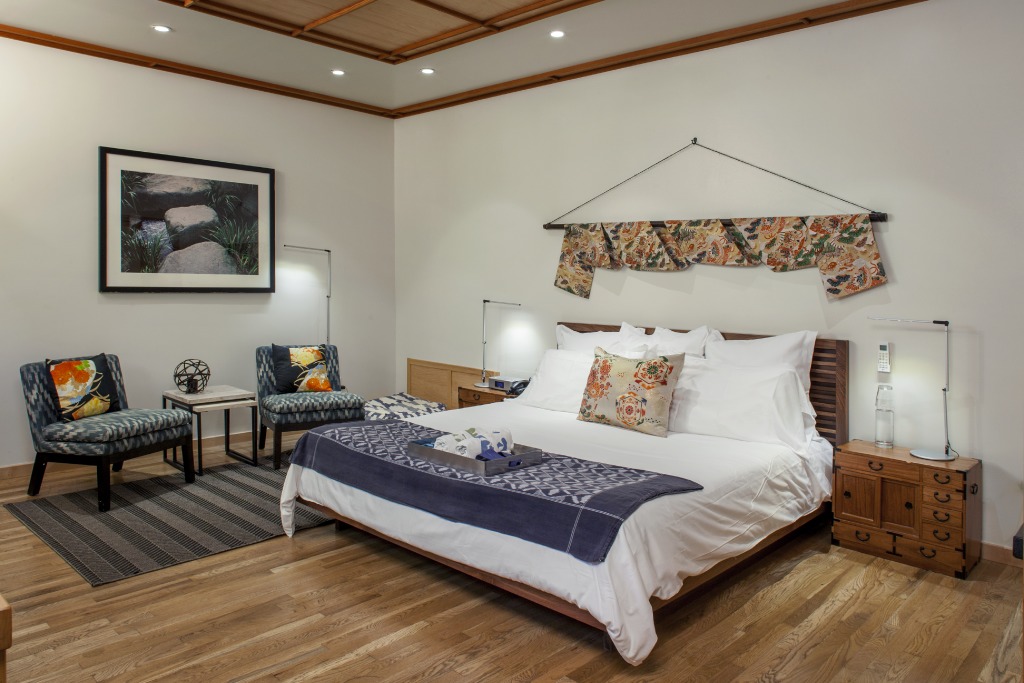 What you don’t see in the picture is the little kitchen area to the right, and the bathroom with the double headed shower, and the wood stove fireplace in the corner to the left. It was pretty nifty. And on the end of the bed there, are robes and slippers to wear around the spa! Also, there were chocolate Buddhas. The fridge in the room had their homemade granola in it, along with organic milk and almond milk, as well.

But enough about the room! Not only is there an amazing spa I have yet to talk about, but there’s also the single greatest restaurant I’ve ever been to! While the Houses of the Moon (the rooms) are located towards the base of the hill, further up is the restaurant, and the spa across the way. Here’s a map! 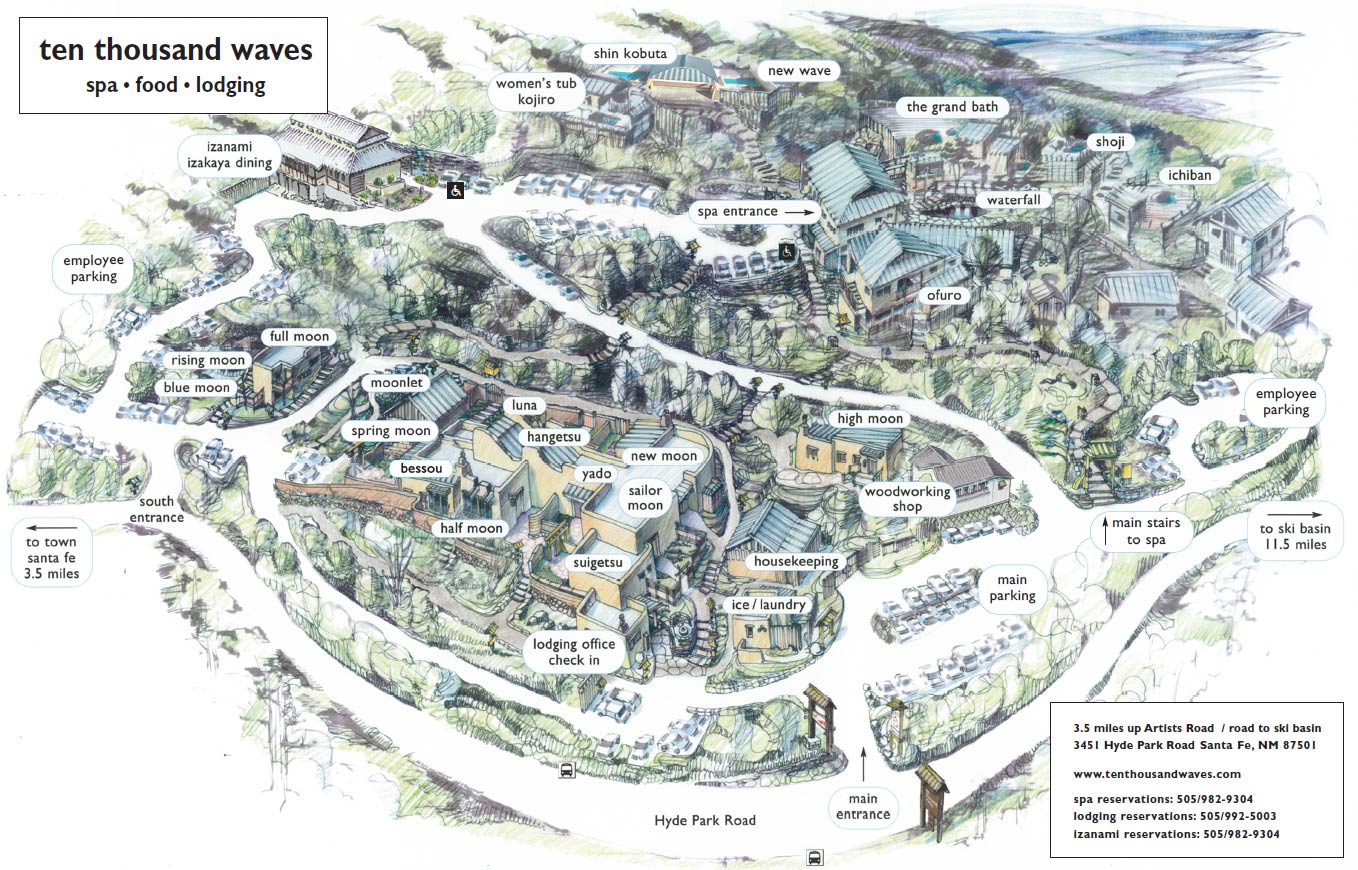 Like I said, it’s like a little village. Everything in the top right corner is part of the spa, those are the names of the onsens. All the way to the left is the restaurant, and everything towards the bottom is the Houses of the Moon.

As I was saying previously, the restaurant, Izanami, has the most wonderful food. Everything I ate was incredible, there was not a single dish where I thought, “yeah this is alright.” I mean it was literally amazing how delicious everything was. From the yuzu panna cotta with blackberry gelée and white chocolate coconut sauce, to the smoked pork ribs with sweet chile glaze and peanut parsley sauce, everything was truly delectable. Especially the wagyu short ribs. I couldn’t believe how good they were, it was truly an experience.

But enough about the food, let’s get to the meat of it! The spa itself. Where to begin? With the steaming hot onsens and freezing cold ice baths, or with the to-die-for massages (which I got two of, because, hey, it was my birthday trip!). There are eight baths total, including a women’s-only tub in which clothing is optional. Here is the biggest and most popular one, the Grand Bath:

If you happen to be someone who is actually lodging with the spa rather than just visiting during the day, you get an extra window of time to be in the tub when the public isn’t allowed. My mom and I took advantage of this and the few times that we went during this time frame, we were totally alone. It was strange to me there were no other lodging members who wanted to take a dip before the public arrived, but I was totally okay with it.

Like I mentioned, I got two massages, one standard one, and one hot oil exfoliation yada yada specialty one. I’ve had many a massage in my day and I must admit the standard 50 minute one I had knocked my socks off. I figured it’d be good, considering it’s a spa and all, but it was like, astoundingly good. First, they have you change into a robe, and they give you fancy fruit-infused water, then they take you down a path that leads away from the rest of the spa, and you pass by a bunch of little buildings, each one is a private massage room. Finally, you reach yours, and the ascension to relaxation begins.

For the second massage, one of the specialty things they did was rub hot oil all through my hair and scalp, and afterwards suggested that I get in the sauna. Of course, how could I say no? I love saunas. Though, I should’ve maybe thought a little bit more about the fact there was oil in my hair. Oil that heated up in the sauna and burned my ears and shoulders because I’m a dummy. All in all a great massage though!

We stayed for four nights and it was just such an amazing experience that I would a hundred and ten percent recommend to anyone and everyone. It is a trip that I will cherish for the rest of my life, not just because of the unique experience I got to have at the amazing and wonderful spa resort, or because of the sights of Santa Fe I got to see, but because I got to spend it with my mom, and honestly I wouldn’t have had it any other way. There was no one I would’ve rather gone with than her, because in all honesty, she’s my best friend.

And she bought us first class tickets for the ride home, too! Woohoo!

← A Small Cosmetic Note
And Now, the Whatever Official Product Solicitation Policy →

48 Comments on “I Miss Travelling, So Here’s My Attempt at Travel Writing”