Thoughts on Pixel Buds 2: The Buddening 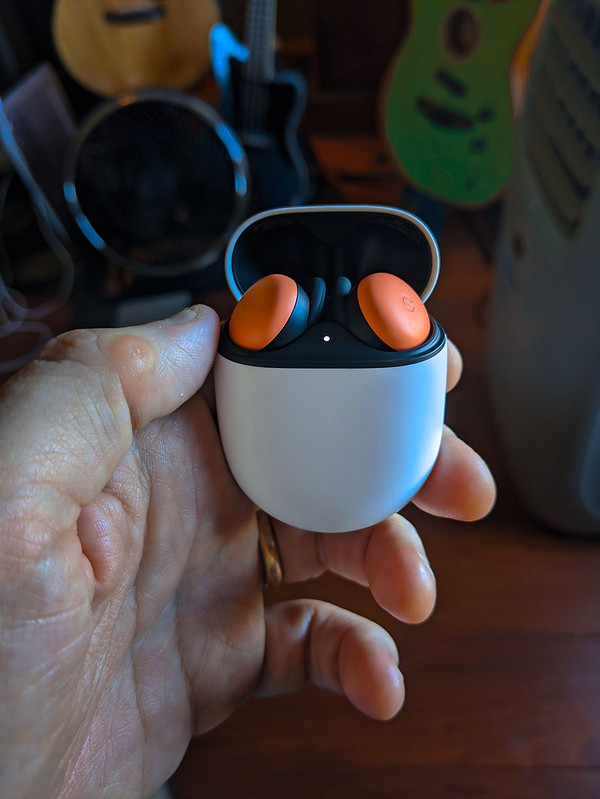 The second generation of the Pixel Buds wireless headphones have been out for a while and I’ve been interested in picking up a pair, since I have the previous iteration and was looking to upgrade. However, I wanted to get them in the Oh-So-Orange color, which only became available this last week (they will match my current Pixel 4 phone, which is also in that color, for roughly two months, after which time I will probably get the Pixel 5 because I’m that guy). The new Pixel Buds arrived today and I’ve spent the day tooling about with them. Because I just know you’re curious, here are some first-draft thoughts about them.

1. To begin, they look pretty cool. Like the first generation, they come in their own little charging case, and when they’re nestled in there and the top is flipped open (which is a solidly satisfying tactile experience, by the way), it looks for all the world like a cute little robot with bug eyes (at least in the orange variant).

2. When you take them out, they have a bit that goes into your ear canal and a little rubber wing that sits in your outside ear to help make them secure, which for me worked very well and was pretty comfortable. The rubber wing is an improvement over the first generation, which used a loop of cord to secure it in your ear. I didn’t mind that at first, but after a while the cord became less secure, and I was always fiddling with them to keep them in my ear.

3. As with the earlier version, the buds have touch controls, and like the earlier version the touch controls can be, well, touchy — it took me a bit to get used to using them in the last set and I can tell that it will take time for these as well. Unlike in the last version, in which only the right bud was touch sensitive, both buds here are, which I’m not sure I like that much. It just means another hand to train.

4. But on the other hand you can do just about anything with the buds, since they’ve integrated Google Assistant into them and that is, by a significant margin, the most useful virtual assistant. I turned on the voice commands for it (I kept those off last time) and so far have looked up some things, sent texts, called Krissy and navigated through a Spotify playlist. All of that worked seamlessly.

5. They sound fine. I think I like the sound profile of the first Pixel Buds slightly better (it at least feels like there’s slightly more bass response), but that might change as I fiddle with the buds. Out of the box the highs and mid-range are good and the bass is more waved at then entirely present, which is not all that unexpected for earbuds. They are not noise cancelling, which I don’t really mind, but the part that goes into your ear canal a smidge mutes the outside world. That said, I definitely noticed when, while having the buds in while going for a walk, an entire fleet of motorcycles blasted by. However, I was able to crank the volume up enough that while I did not drown out literally dozens of Harleys, I could still hear the music perfectly well.

(Update: 8/26/20: The buds just had a firmware update which includes a “bass boost” option. The bass is indeed boosted, and sounds better.)

6. With that said, because I am doing so many “virtual” events these days — wear your damn masks, people, I want to see real live humans again sometime this decade — I was interested in these less for music than I was for doing these online events without wearing monster earphones. On that score, these things are a winner. Their size make them mostly unobtrusive in my ears (even with the bright orange color), and when I talked to Krissy with them earlier today, she both came through loud and clear, and also told me she could hear me perfectly well through their in-bud microphone. They pair almost instantaneously with my Pixel phone (of course), but also come with Bluetooth, so it will be easy enough to pair them with the laptop I use for events.

(I should note I did get a more-than-trivial number of volume dropouts while I was on my walk, although whether that was do to a poor connection to my phone or because I live in the middle of nowhere and the cell signal will randomly drop to one bar just for fun is hard to say. I’ll see if it continues.)

7. Things I haven’t checked yet: Battery life and their ability to wirelessly charge (still too new), the advertised-as-improved automatic translation feature (no one near me speaks a different language), and how they hold up to strenuous exercise (I went for a walk, not a run). If anything about any of these is hugely negative, I’ll probably update this post, uhhhh, eventually.

Should you get these? If you have an Android phone, particularly a Pixel, I suspect they will be a pretty solid investment. This will be especially the case if you’ll use your buds for more than just listening to music, are comfortable using voice commands for Google Assistant, and don’t absolutely need noise-cancelling. If you’re in the Apple ecoverse, have issues with Google or are perfectly happy with your current set of headphones and/or don’t want to pay a premium for wireless buds, you’re probably fine without them. I’m looking forward to using them more, myself, especially on all those virtual events.

← On the Occasion of Ray Bradbury’s 100th Birthday: “Meeting the Wizard”
I Was Writing a Piece About Six Months of Quarantine and Annoyed Myself as I Wrote It, So Here’s Zoe Keating Instead →

22 Comments on “Thoughts on Pixel Buds 2: The Buddening”